Can Germany Defend Europe On Its Own? 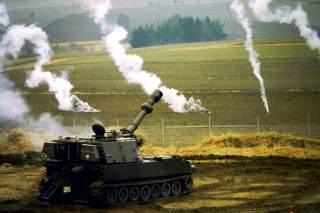 German chancellor Angela Merkel has reaffirmed her position as the unlikely superhero of Europe’s liberal elites. Twelve years in power and facing a difficult election in September, she struck out at the least popular man in Europe: Donald Trump.

Fresh from last week’s G-7 summit, Merkel took a dig at Trump that won her liberal friends around the world. At a Sunday election rally in Munich, she declared that “the times when we could fully rely on others are to some extent over -- I experienced that in the last few days.” The last few days, that is, meeting with Trump.

But the liberal internationalist applause for Merkel misses the point—twice. First, Germany is not among America’s “closest and oldest allies.” That honor surely goes to the United Kingdom. And second, Merkel didn’t single out just the United States. She said that Europe can no longer rely on the United States or the UK for its security.

The most likely answer to both questions is “no.” Since the reunification of Germany in 1990, the once-mighty German Bundeswehr has become notorious for its low levels of readiness. Fewer than half of its combat aircraft are operational at any given time. Germany’s tank forces also require serious modernization that will not be completed until 2023.

Germany’s international political position isn’t much better. Merkel’s demands for austerity policies in the weaker eurozone economies have made Germany extremely unpopular among large segments of the population in frontline NATO countries like Greece, Italy and Spain. These countries are now bearing the brunt of the refugee crisis brought on by Merkel’s 2015 open invitation to Syrian refugees.

Things are no better on Europe’s eastern front, where the governing parties of Poland, Hungary, the Czech Republic and Slovakia have all been chastised by the same euroliberals who look to Merkel for leadership. If the leaders of these countries have started to flirt with Vladimir Putin in recent years, it’s not out of any love for Russia. It’s out of fear of Brussels—and Berlin.

And then there’s Turkey, a nominal NATO member that increasingly goes its own way on defense and whose president, Recep Tayyip Erdoğan, has a chilly and purely transactional relationship with Angela Merkel.

The simple fact is that when the countries of eastern Europe appeal for NATO support in shoring up their borders with Russia, it’s not German commitments they want; it’s American commitments. Germany is not considered a desirable partner, and in any case it doesn’t have the forces to commit.

For all the talk about Trump not respecting America’s Article Five commitment to collective defense—NATO’s “all for one and one for all”—the United States remains the ally of choice throughout eastern Europe, especially in those countries that share borders with Russia.

Few people in Poland or the Baltic states are clamoring for German or European Union defense commitments. The idea of a European rapid reaction force, a fantasy since the beginning of the new millennium, is still little more than a gleam in the eye of Europhiles. And even if it does someday come into existence under German leadership, no one knows for sure whether or not Germany would really fight on behalf of its neighbors.

A month after the hundredth anniversary of the United States entry into World War I, America’s willingness to fight on behalf of a just cause is clear. In fact, a population survey conducted in eight NATO allies showed that Americans and Canadians have the strongest commitment to defending their allies. The country where people were least supportive of going to war to protect another NATO country was . . . Germany.

Last year on the campaign trail, candidate Trump questioned the unlimited, one-sided, absolute nature of America’s Article Five commitments under the NATO treaty. The establishment response was all-out hysteria. But Trump was right: the reality is that NATO is not a mechanism for collective defense. In the absence of European capacity to provide for its own defense, NATO is in effect a one-way American guarantee.

If Europe wants collective defense, it is time for Europe to pass around the collection plate. Most of NATO’s frontline members in eastern and southern Europe are doing their part. Germany is not. And the worst shirker of all is European Commission president Jean-Claude Juncker’s native Luxembourg.

The first step in meeting your obligations is having the capacity to meet them. The world knows that the United States has that capacity. And Trump has made clear that he would like nothing better than for Europe to develop that capacity, too. Your move, Chancellor Merkel.