Can India Balance Between China and America? 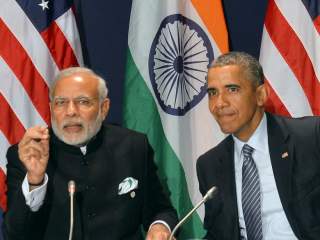 Some in the Indian strategic community believe that recent moves to enhance defense cooperation with the United States could make India, among others, an element in American strategy to limit Beijing’s rising power to the inevitable detriment of India’s relations with its powerful neighbor. Others consider that the “benefits outweigh [the] costs”—especially for India to meet the threat of Chinese maritime ascendancy in the Indian Ocean—and that “Delhi must not let commonsense with Beijing turn into a policy of self-denial with Washington.” Can India find a space in which it can positively engage with both a rising China, and a United States pursuing a “pivot” to Asia to remain a global power?

While the answer is yes, India will also find itself in a position, as it forges strategic ties with the United States, where it must also keep its relations with China from worsening. Contrary to the comparison that China has solid relations with Pakistan despite its close military relationship with the United States, the growing Indo-U.S. strategic partnership must account for China—particularly since both share a geopolitical objective to prevent any Chinese dominance in the Asia-Pacific, and as strong like-minded states in Asia like Japan could also attempt to contain its rise.

From its beginning, the Modi government has sought to engage deftly all the principal actors in the Asian balance and thereby build India up as more than a “balancing power”—making it instead “a leading power.” That means directing India’s foreign policy not only to preserve, but also to increase, India’s relative power. In world politics, while states—mainly great powers—join together to stop “overpowerful” states in order to maintain their relative power, they also aspire to increase their own national power. Becoming a major global power is a deeply rooted traditional objective of Indian foreign policy, and not just as part of a contest with China. With an economy that is the world’s third largest in terms of purchasing power parity, a population of more than 1.2 billion, a continent-sized landmass, the world’s third-largest armed forces and a nuclear capability, India is already a major power in Asia.

India has been building partnerships with the United States, Japan and other middle powers in the Asia-Pacific to balance China as it grows in strength—a policy shaped by India’s own objective conditions, rather than American designs, considering India’s adjacency to China, their power asymmetry, unresolved territorial disputes that erupted into full-scale conflict in 1962, China’s growing strategic partnership with a nuclear-capable Pakistan (which remains a “national obsession” for India) and Chinese maritime ascendancy in the Indian Ocean. “Adjacency” between two states is, according to the ancient Indian principle, a “fruitful source of rivalry and differences.” This principle appears relevant in the case of India-China relations. Both are simultaneously rising with divergent aspirations in the Asia-Pacific, increasing their mutual security dilemma. The proximity of China and Pakistan to India, and their strategic alignment, would require India to forge close ties with the United States and other outside powers to preserve balance. Are circumstances not more complex than, and different from, the Cold War, when India could pursue nonalignment and keep “all big powers at bay while getting close to this or that major country on a contingency basis”?

At the same time, India’s growing economic, political and military relations with actors in the Asia-Pacific are doing more than balancing against China—they are serving its great-power ambition. Therefore, India has many reasons to cooperate and coordinate with entities in the Indo-Pacific, including motives that are not directly related to China. Such partnerships now assist India to position it more seriously as a net security provider in the Indo-Pacific, having already facilitated its membership in the East Asian Summit. The United States has ended India’s “nuclear apartheid” in return for a strategic partnership. Fear of China was just one element.

After all, there are strong interests for economic cooperation among India, China and the United States, in order to grow their relative power; they also have complementary interests in transnational issues including terrorism, the environment and climate change. Because of power asymmetry, India-China, Indo-U.S. and Sino-American relations are also developing individually in areas that exclude the third, a fact that could potentially moderate their balancing behavior. Most importantly, India has joined the China-led Asian Infrastructure Investment Bank, which the United States opposed, and has founded the New Development Bank along with China, Russia, Brazil and South Africa. Even some in India do not consider China’s “One Belt, One Road” initiative to be essentially zero-sum.

While India seems to have concluded that defense cooperation with the strongest power on the earth is in its own national interest, in order to preserve its security, develop its military industry and capacity, and raise its status in the Asia-Pacific, it is “making haste, slowly,” since it stopped short of signing a logistics agreement with the United States.

In some Indian perceptions, the United States continues to hyphenate India and Pakistan because of their rivalry, while the “American military industrial complex… see[s] the South Asian conflict as a potential bonanza.” It is believed that the outside world “can only be a limited enabler in India-China relations, using India-China competition for their own purposes.” In world politics, great powers take, if possible, advantage of the quarrels of others. India and the United States remain ambivalent about each other’s operational help in the contingencies of their future security tensions with China, be they on the India-China border or in the South China Sea. How can India strategically embrace the United States in the Indo-Pacific when the latter sees it as a commercial adversary in the same geostrategic space, and thereby excludes it from the Asia-Pacific Economic Cooperation (APEC) and Trans-Pacific Partnership (TPP)? Therefore “caution” is best, while recognizing the merits of Indo-U.S. strategic partnership. Despite these limits, it is naive to believe that growing defense cooperation between India and the United States will be perceived by China as benign—and that India can balance against China without running any risks. China’s sharp reaction to the 2007 multilateral Malabar naval exercise, conducted bilaterally between India and the United States, is well known. Therefore, New Delhi has pursued high-level engagement with Beijing and has sought confidence-building measures.

It is in India’s national interest not to lose its recent momentum towards closer defense cooperation with the United States, while trying to enhance trade, commerce and amity with China. Since it is a continuous struggle for power, all competitors are inclined to cooperate—especially when the nature of power is more complex and cost of balance-of-power wars is beyond estimation in a world in which all three possess nuclear capabilities.

Contrary to popular belief, India has today more “freedom of action” as it plays more actively in the game of changing power relationships as a great power, rather than passively under nonalignment. Shifts in the global balance of power, and the lack of an organizing principle for the Indo-Pacific order, generate a rare opportunity for India to change its political position—even as it, first and foremost, needs a national conviction supported by a growing economic capacity to become a leading power. As is projected, India could in 2050 share 7 percent of the global product, thereby holding a key position in the Asia-Pacific balance. The combined share of the United States, India and Japan would “easily exceed China’s 20 percent.” This would make India an important “swing state.” Is it in Beijing’s interest to allow that combination, and not try to divide and conquer?

Ajaya Kumar Das is a Researcher at the Guangdong Institute for International Strategies (GIIS), Guangdong University of Foreign Studies, P.R. China. He joined GIIS after a PhD from the S. Rajaratnam School of International Studies (RSIS), Nanyang Technological University, Singapore. The views expressed are his own and do not reflect the official policy or position of GIIS. He can be reached at [email protected].