Can Iraq Be Saved? 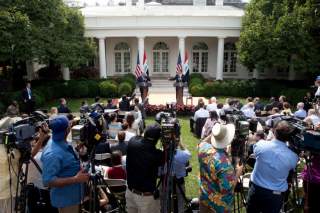 The sudden fall of Mosul, Iraq’s second largest city, and large swaths of the country’s Sunni regions to groups of insurgents and extremists spearheaded by the Islamic State of Iraq and Syria (ISIS) is a grim manifestation of the failure of the country’s leaders to implement a system of governance as agreed in the constitution. Iraq’s mistakes—and those of the international community, including the United States—were not unavoidable, though, and the lessons learned can help resolve similar governance dilemmas in Syria and Afghanistan.

The Iraqi constitution plotted a path for creating a system that protects the country from relapse to dictatorship and emphasized concepts that are appropriate for a country with a history of authoritarian rule and in which ethnic and sectarian divides run deep. The constitution included robust checks and balances, a clearly defined federal system, and provisions for a fair sharing of power and resources among the country’s various communities, provinces and regions.

Although the political process had a shaky start as the Sunni community largely boycotted the first post-Saddam election, intense diplomatic efforts by the United States eventually convinced Iraq’s Sunni leaders to conditionally support the moving forward with the referendum on the constitution, which received more than two-thirds support. The Sunnis also participated in the post-referendum national elections in late 2005. As a result, the framework garnered the buy-in of the country’s key groups—Shia, Sunni, and Kurd. As Iraqi communities were coming together, the Al Qaeda attack on Samarra shrine, a revered site for the Shia, in February 2006 resulted in a massive increase in violence verging on a sectarian civil war.

Despite the increase in violence, and with U.S. commitment and help, the Iraqis came together and replaced Prime Minister Jaffari with Nouri al-Maliki and formed a national unity government. Supported by increased U.S. troops during the surge, the tide was turned. The improvement in security following the surge and the successful election in 2010 offered Iraq the security space to consolidate democracy and advance toward stability. The chance, alas, was squandered.

Iraq could have capitalized on that progress at the time and avoided this fate if it had implemented the roadmap that was prescribed in the constitution.

Instead, a number of mistakes were made. Contrary to the constitution, the party that won the largest number of seats in the 2010 election—the secular and cross-sectarian Iraqiya led by Ayad Allawi—was not allowed to form the government. Instead, in a deal backed by the United States and Iran, Prime Minister Maliki remained the country’s prime minister. Instead of implementing a power-sharing agreement, which was the basis for Maliki remaining in office, he began to eliminate political rivals (especially among the Sunni Arabs), politicize the military and security services, and monopolize (rather than share) power. He also undermined the implementation of the federal system that was clearly stipulated in the country’s constitution. The consequences were twofold.

First, large segments of the Sunni community lost trust in the government, and more dangerously, lost hope that they would be treated with dignity and fairness as partners in governing the country.

Second, relations between the central government and the Kurdistan region also deteriorated to the extent that Kurdish leaders became convinced that Iraq’s federal structure had failed because the Maliki government repeatedly ignored or violated the political compact enshrined in the constitution, which was the basis of Kurdish assent to remain in a new Iraqi federal state.

The United States could have played a vital role in helping Iraq stay on the right path. Instead of a complete withdrawal of U.S. troops and consequent political disengagement from Iraq’s affairs, the United States should have sought to maintain a residual security presence in the country, coupled with robust diplomatic engagement, to provide the core security support necessary for the democratic political process to resolve the country’s problems peacefully.

Sustained presence and stabilizing influence over decades is in great part what allowed Germany, Japan and Korea to undertake the long-term sustained effort to build the political and economic institutions required for long-term stability and prosperity.

Continued robust U.S. military and political engagement in Iraq in the past few years could have prevented today’s crisis if the United States had done the following:

- Functioned as a credible buffer between different communities, bridging communications and diffusing tensions by ensuring that each side understood their rights and responsibilities (for example, facilitating joint military mechanisms along disputed territories);

- Overseen the proper implementation of power-sharing agreements and checked the excesses of the ruling party/coalition, which would have restrained Maliki’s behavior;

- Prevented Iran from using Iraqi land and airspace to drag Iraq into the Syrian civil war on the side of Bashar Assad’s regime, with all its consequences for internal Iraqi cohesion;

- Assured key regional actors that Iraq’s new government would not become a hostile power to any of them. If the core interests of their allies in Iraq could have been safe-guarded in an agreed power-sharing framework, interested regional parties would have had the incentive to help that framework succeed.

Instead, Iraq’s neighbors viewed the situation as a zero-sum struggle for power, though failing to recognize the fact that no one Iraqi group could completely control or defeat its rivals. Regional powers competed to fill the vacuum produced by the United States’ departure. Iran wanted Shia to dominate. Gulf states wanted Sunnis to retake power. As neighbors begin to fear the worst-case outcome for their interests, they begin to act by fueling the conflict and internal divisions in an effort to assist groups with which they sympathize. The danger of creating a vacuum by precipitous withdrawal is an important lesson for Washington as it draws down the U.S. military presence in Afghanistan.

The tragedy of Iraq shows that fragmented societies composed of multiple communities that have distinct ethnic and sectarian identities cannot be legitimately controlled by one group. The concentration or monopoly of power by one individual or community at the expense of others exacerbates tensions, anxiety and distrust. These conditions, when exploited by a determined extremist group like ISIS, can eventually push the country to a state of civil war. In the case of Kurdistan region, the Kurds will likely demand a restructuring of relations with Baghdad, perhaps even seeking independence. Going forward, the situation is likely to follow one of two paths.

First, Iraq’s leaders could seek to restore stability through renewed power-sharing arrangements among the three large communities—Sunni, Shia and Kurd. Based on conversation with Iraq’s leaders, there is a consensus that Maliki must be replaced with a new prime minister to restore unity. This could unfold in two ways. Iraqis could establish a supreme national council consisting of the major leaders of the three communities, which could include Maliki, but which would have a new prime minister. Alternatively, the three communities could agree on a new Shiite leader to replace Maliki as Prime Minister.

Getting Maliki to cooperate will be difficult. He is stubborn and has done quite well in this year’s election. He will try to play the Iran card and argue that if you imposes conditions on its assistance, he will move closer to Tehran and accept its "unconditional" aid. Yet, difficult is not impossible. Even with his large voting bloc, he does not have the votes in parliament to form a new government. The Shiite religious leadership led by Ayatollah Sistani is not favorable to him.

To achieve this outcome, U.S. diplomatic leadership, combined with a willingness to assist Iraq on the security front, will be vital. U.S. diplomacy should engage not only Iraqi leaders, but also directly or indirectly coordinate with others actors, especially Iran. This type of coordination was critical in 2006, when Prime Minister Jaffari agreed to vacate the post of Prime Minister.

If a new power-sharing arrangement is reached in Baghdad, local Sunni Arab leaders, including tribes, are likely to cooperate with the government against ISIS. This is what happened in 2006, 2007 and 2008. The Kurds, too, might defer exercising the option of going their own way.

The second path for Iraq—in the absence of compromise—will be fragmentation. Kurdistan, which now controls all the disputed territories that were in dispute with Baghdad and has also acquired the oil and gas resources that can make it financially independent, will likely decide to go its own way, forging strong ties with Turkey and the West. Iraq’s southern provinces and the Baghdad government will come under increased Iranian influence. In these areas, militias including some Shiite extremist groups with ties to Hezbollah and the Iranian Quds Force will gain control. The Sunni provinces will remain unstable, with both internal disputes and continued conflict with and within Baghdad and with various groups establishing ties with different regional states and transnational groups, including terrorists potentially threatening U.S. interests. As this unfolds, the United States might have to target terrorist sanctuaries in Iraq in a way similar to its actions in Pakistan, Yemen and Libya.