Can Israel Solve Its Gaza Nightmare? 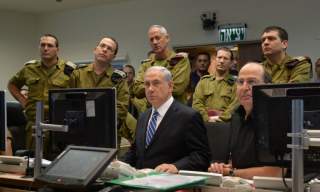 SATURDAY, AUGUST 2, 6:30 AM—I am awoken by the piercing sound of the alert siren—another rocket attack—and sleepily make my way to the safe room in my apartment. Ever since Iraq fired missiles at Israel in 1991, every home has one room made out of reinforced concrete, capable of withstanding all but the heaviest warheads. It looks just like a regular room, except for the outer steel plate which can be drawn closed to cover the window, and a similar door. A few minutes go by and I go back to sleep. It is Saturday, after all.

Netanya, where I live, half an hour north of Tel Aviv, has been lucky and only had half a dozen alerts since the fighting broke out. Just minutes to the south, there have been far more and in some areas, especially near Gaza, people have had to endure that many alerts, or many more, each day. So far, Hamas has fired over 2,900 rockets at Israel, more than 100 per day.

In some ways, this is an existential war—not really about Israel’s very existence, that is no longer in doubt, we won that battle through repeated bloody confrontations with the Arabs over the decades, and Hamas itself has no ability to threaten Israel’s existence—but over the nature and quality of our existence. One can minimize the Hamas threat; thanks to Israel’s incredible Iron Dome antirocket system, only three civilians have been killed by rockets so far and most of the sixty-four soldiers killed were due to mortars, attack tunnels and the generally difficult nature of urban warfare, not rockets. Indeed, this has been a deluxe war for Israel; life in most of the country, though not near Gaza, goes on with near normalcy; people go to work, the beach, movies—albeit with those occasional heart-stopping moments when the alert goes off.

Alternatively, one can focus on the utter insanity of the situation: a modern Western country, a world leader in high-tech, a remarkable center of cultural life, repeatedly forced to endure periods of attack by terrorist organizations that are based on its borders and seek its destruction. This is now the fourth major round in the eight years since Hezbollah initiated the 2006 Lebanon War, during which it fired over 4,228 rockets at Israel in thirty-four days. It was followed by Hamas’ rocket fire, which led to the Cast Lead Operation in December 2008-January 2009 (893 rockets and mortars in twenty-one days) and by renewed Hamas rocket fire which led to Operation Defensive Pillar in November 2012 (1,500 rockets in eight days). This is clearly no way to live.

The small number of Israeli casualties, in contrast with the destruction and casualties in Gaza, has fed international criticism regarding so-called disproportionality. Some critics conveniently forget that had it not been for Iron Dome the number of Israeli casualties would have been huge (One cannot help but wonder if that would have satisfied them). Moreover, without Iron Dome, Israel would have had no choice but to launch a major ground invasion to end the rocket fire, unlike the very limited one- to two-mile incursion of recent days, aimed at Hamas tunnels, not the rockets, which would have led to far more Palestinian casualties. In effect, Iron Dome saves Palestinian lives as well.

The destruction in Gaza is a tragedy. It is, however, a tragedy that was caused by Hamas itself— which believes the greater the devastation and the number killed, the better—serving to show that it is championing the Palestinian battle against Israel and diverting attention from its corrupt, totally repressive, criminally failed rule of Gaza. It is Hamas that has been intentionally firing on Israeli civilians for fourteen years, a total of some 15,000 rockets; Hamas that places weapons among its own civilian population, including in schools, hospitals and mosques, thereby leaving Israel with no choice but to unavoidably hurt civilians when it defends itself; Hamas that intentionally uses civilians as human shields, cynically encouraging people to stay put even when Israel issues warnings that some target is about to be attacked. What is truly disproportionate is Israel’s attempts to prevent civilian casualties, unparalleled by any other country, and Hamas’ total disregard for human life.

Moreover, there is a fundamental popular misconception today regarding disproportionality in warfare. Warfare, the most heinous, if at times necessary, form of human endeavor is not about being fair and proportional; it is about wielding disproportionate force to defeat an enemy. Tragically, civilians die in war. The only question is whether they are targeted indiscriminately. There is no doubt that Hamas does target civilians indiscriminately and that Israel does not.

Hamas has now violated six cease-fire agreements. For Israel, unfortunately, all the options are bad.

A major ground operation to topple Hamas would entail truly large-scale casualties on both sides, of a magnitude way beyond what we have seen to date. It would require a temporary reoccupation of Gaza, from which Israel withdrew in 2005, to clear out Hamas fighters, positions, tunnels, stores and leaders, a period estimated by various experts at anywhere from six to twenty-four months. As bloody as this is likely to be, it might be worth doing were it truly likely to lead to long-term quiet. Hamas, however, is not just an organization, but a mind-set and a popular movement, which is very hard to destroy. Even assuming that it can be toppled, the question remains as to who takes over once Israel withdraws. Either Hamas will reconstitute or another, even more heinous organization (if there is such a thing), such as Palestinian Islamic Jihad, or Al Qaeda, will take over and the threat will likely reemerge, albeit after some time. For these reasons, the Israeli government has not adopted this approach.

A more ambitious option, pursued in recent days, is to try and reach a formula based on “demilitarization in exchange for reconstruction”. Under this approach, Gaza would be subject to some sort of international inspections mechanism to prevent Hamas from rebuilding its rocket arsenal and reconstructing attack tunnels, in exchange for an Israeli-supported international effort to rebuild Gaza. It sounds good, but an effective international mechanism of this nature does not exist, and an outcome such as this would constitute a major success for Hamas, which initiated the fighting at least largely because of the dire economic crisis its policies caused in Gaza. This option would make sense if it could be used as a means of reestablishing the Palestinian Authority’s (PA) control in Gaza, e.g. by providing international assistance monies solely to the PA, for it to spend in Gaza, and if the arrangement was truly contingent on demilitarization. Hamas, however, will not truly accede to either condition, and in reality, this option would constitute just a fig leaf for a decision by Israel to end the fighting now, having achieved only part of its objectives. That, too, has value.

A third option, the current approach, is an Israeli decision to end the fighting unilaterally, after having destroyed most of Hamas’ tunnels and significantly degraded its rocket arsenal. In reality, this would probably be no more than a stopgap measure. It would simply be a matter of time before another round occurred. Hamas would likely emerge strengthened, and Prime Minister Netanyahu might face a political backlash from the Israeli public, which is tired of the endless rounds and desirous of a more long-term solution. It is, however, probably the least bad choice Israel faces, admittedly a sad and bitter conclusion, but the solution to some threats is even worse than the threat itself. The downsides here could be mitigated by an understanding with the Egyptian government, which is viscerally anti-Hamas, to continue its intensified efforts to prevent cross-border smuggling into Gaza, the primary source of Hamas’ rocket arsenal, and some heightened international cooperation in this regard.

Only a peace agreement might lead to a more fundamental solution to the problem, but Hamas, whose charter calls for Israel’s destruction, is absolutely not a partner for this and in the negotiations so far, the PA has taken extremist and totally unrealistic positions, such as insisting on a complete “right of return” of Palestinian refugees to Israel. The current Israeli government, too, has taken a hardline approach. Having said that, “no crisis should ever be wasted”, as the old saying goes, and hopefully it can be leveraged for more-effective postconflict negotiations with the PA. Realistically, it probably cannot, and the prospects for progress to peace are dim for the next few years.

In the meantime—back to preventing rocket attacks, tunnel infiltrations and terrorism generally. No country would tolerate this.

Chuck Freilich, a senior fellow at Harvard’s Kennedy School, was a former deputy national security advisor in Israel. He is the author of “Zion’s Dilemmas: How Israel Makes National Security Policy”.