Can Israel Still Count on the 'Begin Doctrine' to Stop Nuclear Threats? 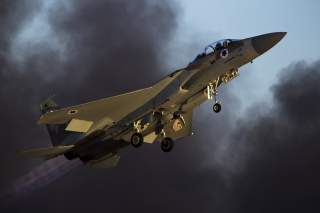 Last month, the Israeli military confirmed that it conducted the 2007 air strike that destroyed the Syrian nuclear facility in the Deir al-Zour region. While the international community had long known that Israel was behind the attack, this much-delayed confirmation was a timely reminder of Israel’s impressive intelligence and air capabilities. Nevertheless, this renewed focus on the attack may have also exposed the limitations of Israel’s ability to replicate its success.

Israel’s action in Syria was not unprecedented, but rather mirrored the June 1981 air strike against the Osirak nuclear facility outside Baghdad, Iraq. Following the destruction of the Iraqi facility, Menachem Begin, then prime minister, stated that if Iraq could have developed nuclear weapons, “another Holocaust would have happened,” but instead the country decided to “defend our people with all the means at our disposal” and “not allow any enemy to develop weapons of mass destruction turned against us.” Israel’s strategy of preemptively striking the nuclear facilities of its regional enemies subsequently became known as the “Begin Doctrine.”

Despite the past successes of the Begin Doctrine in Syria and Iraq, it remains unclear whether Israel will be able to replicate these attacks in the future. At this important juncture in history, as President Donald Trump contemplates withdrawing from the 2015 Iran nuclear deal and Israel considers its options against Iran, we believe several factors will severely limit Israel’s ability to continue fulfilling the Begin Doctrine.

Perhaps the most important assumption underlying the Begin Doctrine is that Israel will be able to discover a country’s nuclear program before it becomes operational. Despite its strong reputation, though, the Israeli intelligence community has historically been late in uncovering such programs. For example, in 2003, Israel learned that Libya had been building a nuclear program only after hearing news reports that the United States and the United Kingdom were negotiating with Libya to end the program. Furthermore, after this failure prompted a renewed intelligence review, Israel discovered that Syria had been developing nuclear weapons with the assistance of North Korea for at least three years. Israeli leaders, including former vice prime minister Haim Ramon, characterized this delayed discovery as “one of the intelligence community’s biggest failures ever.” Conversely, Israel and the United States also erroneously concluded that Iraq possessed weapons of mass destruction in 2003—a conclusion used to justify the invasion of Iraq.

As countries become even more adept at obfuscating their nuclear activities, Israel will need to understand that it may not know about every program in existence. Consequently, and despite Israel’s advanced intelligence capabilities, it is no longer inconceivable that one day Israel could discover a new nuclear facility, or nuclear test, of an unsuspected country. Simply put, intelligence gaps constrain the Begin Doctrine, because Israel can only launch a preemptive attack if it knows that a country has a nuclear program.

Both the Iraqi and Syrian nuclear programs were concentrated in one central facility, making it easier for Israel to dismantle the programs with one air strike. However, we must now assume that countries have learned from history and dispersed their nuclear programs across many facilities, thus making an air strike more difficult. As just one example, Iran has multiple known nuclear sites, and other research and support facilities scattered throughout the country. Given that other countries have likely adapted as well, it will now be more difficult for Israel to identify nuclear targets and execute successful attacks.

Not only were the Syrian and Iraqi facilities consolidated in one primary location, but they were also located at or near ground level. This made the sites easier to destroy with a conventional air strike. Now, though, it is known that some nuclear sites, including in Iran and North Korea, are located deep underground and will be harder to destroy with conventional air strikes. Just as attacking scattered nuclear facilities presents a challenge for Israel, so does attacking sites located deep underground.

Attacking an active or “hot” nuclear reactor carries significant risks, because damage to the nuclear core or spent fuel pools might cause significant radioactive harm to both the environment and surrounding population. When Israel attacked the Syrian and Iraqi nuclear reactors it knew there was no risk of radioactive damage, because the reactors were not yet active. This is no longer guaranteed, as countries are now at advanced stages of the nuclear development process. Moving forward, Israel will face a dilemma when deciding whether to strike a nuclear facility, which, if active, could create significant radioactivity concerns.

Given the high cost and risks associated with independently developing a nuclear program, countries may find it easier to acquire nuclear weapons by purchasing some, or all, of the required resources. For example, it is known that North Korean scientists were in the Syrian facility when it was destroyed, and that North Korea likely provided critical nuclear materials to Syria and helped to build its reactor. This approach may not only be easier, but it also allows a country to avoid building a large nuclear facility susceptible to an attack. Thus, if a country seeks to purchase, and not independently develop, a nuclear program, it will be much harder, if not impossible, for Israel to destroy the program with an air strike.

Any future Israeli effort to strike a nuclear-armed country will require intensive cooperation with the United States. Presently, United States leadership (chiefly President Trump, National Security Advisor John Bolton and Mike Pompeo, the nominee for secretary of state) would likely back an aggressive approach against a nuclear state. However, it is unknown for how long this support will last. In addition, any decision to attack a nuclear facility will be highly contentious in both Israel and the United States. This could make an attack more difficult, by increasing the odds that plans are leaked to the media or other allied countries. For example, prior to the Iraq air strike in June 1981, a leak caused the attack to be postponed, and according to one United States official, it was a “sheer miracle” that a similar leak did not occur before the 2007 Syria attack. In the future, such secrecy cannot be guaranteed, and a leak could ultimately prevent a planned attack from taking place.

Together, these six factors suggest that Israel is now facing a new reality—it will probably be unable to preemptively destroy a country’s nuclear facility by air strike. For this reason, Israel (and other Western countries) must pursue other methods to confront countries seeking nuclear weapons. Unfortunately, though, alternatives to an air strike, such as direct military action or political and economic isolation, come with significant shortcomings. These flawed alternatives, coupled with Israel’s limited ability to follow the Begin Doctrine, leaves Israeli leadership in the uncomfortable position of choosing the less objectionable strategy to counter a nuclear regime, as opposed to selecting the best option.

Image: An Israeli air force F-15 fighter jet flies during an exhibition as part of the graduation ceremony of air force pilots at Hatzerim air base in southern Israel June 25, 2015. REUTERS/Amir Cohen