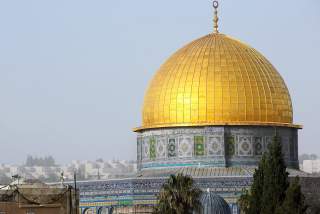 Here, in Israel, a joke is making the rounds. How does a Saudi do business with an Israeli?

Like all the best jokes, it contains an essential truth: that in the face of mounting criticism and the spread of Boycott Divestment Sanctions (BDS) campaign on campuses across western Europe and the United States, Israeli business—notably its high-tech sector—is going from strength to strength. The “start-up nation” is living up to its name, and its benefits are being felt most strongly in the United States.

Donald Trump has entered the presidential office vowing to make “America Great Again.” It is hard to discern what this woolly statement—reminiscent of Obama’s “Yes We Can!” in its triumphant yet nebulous tone—means, or indeed what most of his policies actually entail. But it is clear that, as a businessman (albeit one of questionable success), his political ideology is largely economically based.

Trump has said he wants to bring jobs back to the United States and to impose tariffs on imports, but this is twentieth-century economic thinking in a twenty-first-century world. As automation will increasingly come to dominate manufacturing and associated industries, technology and innovation will be the true drivers of economic growth. And nowhere are these two areas more prevalent than in the United States and Israel.

Jerusalem is cold. There is a biting February wind. Nonetheless, thousands have descended on the 2017 OurCrowd Global Investor Summit near the city center. With five thousand attendees, it’s the world’s largest equity crowdfunding conference. Investors looking for everything from artificial intelligence to robotics have made the trek to Israel’s capital.

And it soon becomes clear why. Last year, Eric Schmidt, formerly the chief executive of Google and now executive chairman of its parent company, Alphabet, told an audience at Google’s offices in Tel Aviv that “for a relatively small country, Israel has a super role in technological innovation. I can’t think of a place where you could see this diversity and the collection of initiatives aside from Silicon Valley . . . That is a pretty strong statement.” He also noted that several Israeli technology companies were on their way to being worth $1 billion.

Israel, with a population smaller than that of New York, has long punched above its weight in a variety of arenas—and there are reasons for that. Israel is surrounded by a mass of mostly hostile nations, many of which have tried repeatedly to defeat it. The country has had to fight—literally (and the word is used correctly here)—for its survival from its birth. It is also a Middle Eastern country without oil or an abundance of natural resources (though that somewhat changed with the discovery of the Leviathan and Tamar gas fields in the Mediterranean Sea, just off Israel’s coast). These factors have forced the nation to be innovative—in everything from the military to medicine. It is innovation born of scarcity.

And it is innovation that is now bearing ripe and timely fruit. According to Jonathan Medved, a serial entrepreneur and venture capitalist, as well as the founder and chief executive officer of the OurCrowd Global Investor Summit, “Israel high-tech is raising capital like nowhere else. Globally, venture-backed exits declined 26 percent in 2016. Israel, however, was the outlier—seeing record growth and a record year with $4.8 billion invested—up from $2.2 billion in 2013; 120 percent growth in three years.”

Medved is a large and imposing man. Gregarious and charming, he wore a kippah and a bushy beard at the summit. He spoke with a broad American accent. I asked him about the effect of the BDS campaign, which has sought to exert political—and especially economic—pressure on Israel, lobbying international firms to cease doing business with the country. It’s all the rage in Europe and the United States, especially amongst the youth. Isn’t this, I asked, a huge problem, for Israeli-American cooperation?

His reply was as swift as it was unequivocal. “Israeli business is not like Israeli politics,” he said. “In India, China, Japan, Israel is a top brand—BDS is important on college campuses, NGOs and some part of the church, but not in business. And the trend is an upward one. Ten years ago, there was a fear that Asian companies would not do business with Israel because of pressure from Arab states. That no longer exists.”

He continued: “I was sitting at my Shabbos table with one of [the] top U.S. hedge fund managers and an Israeli MK—and I asked him about BDS. His response? ‘What is BDS?’”

“Look,” he concluded: “Anyone with a brain cannot support BDS. If you do: get off Google, Facebook, your laptop, anything with an Intel chip.”

What does this boom in Israeli tech mean to the United States? The answer, according to David Goodtree, who sits on the Board of Directors of OurCrowd, is simple: it creates jobs; it creates wealth.

He takes the state of Massachusetts as a case study. “There are over 200 Israeli-founded companies in the state alone,” he said. “In 2015 those companies brought $9 billion in revenue and $18 billion in economic impact to the state, representing almost 4 percent of its GDP. They also brought twenty-seven thousand jobs and $400–500 million dollars of venture capital.”

“Israeli companies drive the mass economy in the U.S.,” he continued. “Similar influence can be found in NYC and Florida. Last year, thirty state governors visited Israel, and they came for economic—not political—reasons.”

The Florida Israel Business Accelerator is an example of how a U.S.-Israeli partnership is flourishing across the country. The initiative was set up via Israeli inroads into Massachusetts. Meanwhile, in Vermont, Plasan, an Israeli company that pioneers armor technology, is now among the state’s top employers—along with Ben and Jerry’s—with around one thousand, mostly local, employees. Plasan also has a $30 million plant in Walker, Michigan, to mass-produce carbon composite parts for an automotive customer and application.

“This country is on fire in terms of innovation,” Medved told me with a wide grin. “People say it will run out of steam but it won’t—it’s about collaboration and Israel is coming to be seen as international hub. And it’s gaining momentum.”

The secret to the growing the Israeli-U.S. technology partnership is that each country brings its own unique skill that the other critically lacks. Israeli companies need to hire American talent to compensate for their areas of weakness. At the center of the partnership lies the ability to scale up. Israeli companies have the innovation—the research and the skills to create a great product, often a prototype. Unfortunately, those companies lack the know-how to make that product go “big” by producing it on a mass scale, an American specialty. This phenomenon is seen from the case of Rewalk, an Israeli technology designed to help paraplegics walk again. The product was exceptional, but Rewalk’s creators lacked the knowledge necessary to get the funding to produce it to scale or get FDA approval. Then an American firm stepped in. Technology from Israel combined with management experience from Boston: it was the perfect combination.

This scenario is replicated everywhere. Israel is the fastest innovator in the world. Israeli companies start in beta mode back home, shake the bugs out of their products there, get funding and customer testimonials before importing—mid-stage—companies to the United States.

The United States then, rather than incubating its own companies and then facing the prospect of possibly watching them fail, gets the cream of the crop. The process is simple yet highly effective. About 80 percent of Israel’s technology companies are majority funded by North America through increased cash flow. U.S. money flows into Israeli companies that then go to the United States to set up shop, employ people and pay taxes, before they are eventually bought out by U.S. companies. It’s the definition of a virtuous circle.

The dramatic change in information and technology has brought a new industrial revolution into the world. As geopolitical power shifts and morphs, so does economic power and the forces that drive it. If paraplegics may one day walk again, then the world that technology is creating is potentially limitless—and so are the opportunities for the businesses and investments that go with it.

The high-tech world is a truly egalitarian industry that allows one of the smallest countries to partner with one of the largest countries—and alliance that creates benefits for both participants.

If Trump truly wants to make America great again, then he will need all the help he can get. And nowhere can that help come more from Israel, the start-up nation.

David Patrikarakos is a contributing editor to the Daily Beast, contributing writer to Politico Europe and the author of Nuclear Iran: The Birth of an Atomic State.