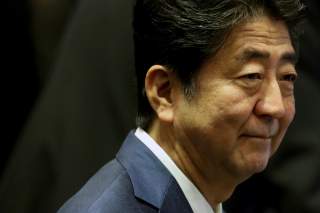 President Donald Trump recently announced that a “free and open Indo-Pacific” (FOIP) would be part of U.S. Asia policy. It is a strategic vision that will link Japan and East Asia to India in South Asia in an effort to uphold rule-based international order. FOIP is a forceful response against China’s assertiveness in the South China Sea, and possibly a tool for countering China’s Belt and Road Initiative, which stretches from Asia to Europe.

FOIP is not a newly developed concept. It was originally advocated by the Japanese prime minister Shinzo Abe in 2006. Indian and the Pacific Ocean regions can be integrated into a strategic area maintained by like-minded democratic countries, such as Japan, India, the United States and Australia. The United States didn’t endorse Abe’s idea at that time, but the Trump administration appears to support this strategic vision which aims to counter China’s economic and military rise.

The Indo-Pacific strategy might certainly carry great aspirations and opportunities for Japan, the United States and other Asian countries. At this stage, however, this proposal encounters a severe gap between institution and identity formation. Turning the Indo-Pacific idea from myth into a reality has evoked both scholarly and policy debate in Asian politics. It is especially a pressing issue for major powers in Asia, because the success of the Indo-Pacific idea hinges on the formation of common identity—whether India, Japan or Indonesia can move beyond national interest and reach a collective understanding. Thus, it is necessary to draw up a roadmap for Japan’s foreign policy in executing the Indo-Pacific strategy in Asia, focusing on connectivity, diversity and cooperation.

Heated policy debates are currently circulating in Japan due to concerns that participation from the United States and Australia in FOIP might dilute Japan’s role in the strategy. But it should be noted that there is a feasible way for the Japanese government to resume rhetorical leadership in formulating the Indo-Pacific strategy. Two elements from the “Greater East Asia Co-prosperity Sphere”—rejecting Western dominance, and gaining independence via diversity—provide the dos and don’ts for Japan’s policy discourse. Specifically, by revisiting the rhetoric and rationale behind Japan’s discourse on Pan-Asiaism helps the Abe administration seize the strategic opportunity in gaining resonance in both Japan domestic audience and aboard. When faced with intense power competition between China and the United States, the Japanese government can minimize the negative effects of being portrayed as an expansionist power and lead to positive images of a partner with the developing countries.

Lessons from the pre-WWII Japan

During 1930 to 1940s, Japan advocated the “Greater East Asia Co-prosperity Sphere,” (hereafter, co-prosperity sphere) a regional concept which extended from East Asia to Southeast Asia and India Oceania. It aimed at creating Asian countries led by Japan but free from Western colonial powers, as then Prime Minister Fumimaro Konoe strongly indicated that Japan should “reject Anglo-American based pacifism” at that time. However, this initiative was later appropriated by Japanese militarists to support empire building and territorial expansion. With the defeat of Japan at the end of World War II, the concept of the co-prosperity sphere remained as Japan’s unfulfilled aspirations despite its economic growth. At first glance, what Japan can learn from the past is “not to challenge world order” and to “actively integrate itself to liberal institutions.”

However, another aspect of the co-prosperity concept—diversity and development—sheds light on how Japan carries great potentials in shaping the future of FOIP strategy. Japan’s diplomacy in Asia and beyond might gain wider support by revisiting its previous discourse on prosperity, integration, and independence among Asian countries; Abe can elaborate these characters while advocating Indo-Pacific strategy.

What Abe can learn from the co-prosperity sphere lies in building an inclusive and diverse way to development and prosperity for the developing countries in Asia and beyond. The original concept attempted to free Asian countries from Western domination through independence, and the essence of the idea still has resonance among Asia countries when faced with intense power competition between China and the United States. Japan, in this sense, should serve as a reliable mediator between the developing countries and great powers.

For example, Japan can actively promote the Asia-Africa Corridor (AAGC) with India to strengthen economic cooperation and sustainable development in Africa. Unlike the Belt and Road initiative, which focuses on energy and infrastructure, both Japan and India can borrow the rhetoric of “independence and diversity” from the co-prosperity sphere in the development projects of the AAGC. Tailored developmental plans suit the special needs of African countries, as most of them are going through different stages of economic development.

Moreover, India might also benefit from such rhetoric of diversity and connectivity, as it has a long-lasting tradition of maintaining independence in foreign policy. Both Japan and India prefer to enjoy greater room for maneuver, and to avoid the entanglement of conflicts between China and the United States.

Few Japanese talked about the FOIP through the co-prosperity sphere, because they consider these concepts to be in opposition to each other. These assumptions were based on conventional explanations that the essence of the co-prosperity sphere is aimed at challenging the Western-led international order without paying equal attention to the more promising yet unrealized elements: cultural diversity, regional connectivity and economic development.

The Future of Indo-Pacific Strategy: Avoid the Expansionist Rhetoric

The language from the co-prosperity sphere concept also points to how Japan’s wartime history showed that nationalistic discourse might narrow a foreign policy idea down to “Japan’s interests,” or made such discourse appear as mere propaganda for Asian countries. Therefore, the substance of Indo-Pacific strategy should not provoke China and alarm other Asian countries of Japan’s colonial past.

More importantly, Japan needs to refrain from making official statements target specifically against China. For example, Tokyo’s previous diplomacy of “Arc of Freedom and Prosperity” was directed at Beijing, and this rhetoric implicitly assumed that a rising China might pose a threat to Asia. The current discourse of the FIOP stresses the spread of Western liberal ideas such as democracy, human rights and the rule of law to Asia and beyond. Such rhetorical strategy easily leads to the opposite effect of creating regional tensions between FOIP members and China, which undermines the prospects of development and diversity. Japan can and should be actively involved in the reshaping of FOIP policy discourse, because the unfulfilled promise on “connectivity with diversity” avoids targeting against China and opens up room for cooperation.

As Prime Minister Abe recently stated at the Asian-African summit, Asia and Africa are vibrant soil for development. Japan and India can be reliable partners for developing countries in those two regions. Two essences of the co-prosperity concepts provide insights on how the Japan elites can become rhetorical entrepreneurs of advocating ideas and policy in Asia and beyond. Japan certainly can play a bigger role in the making of Indo-Pacific strategy, so long as it can learn from the history.

Christina Lai is a lecturer in Global Security Studies at Johns Hopkins University. She is interested in U.S.-China Relations, Chinese Foreign Policy, East Asian politics, and Qualitative Research Methods. Her works have appeared in the Pacific Review, International Relations of the Asia-Pacific, Journal of Asian Security and International Affairs, Asia Time, China’s World and Asian Security.