Can Joe Biden Really Engage with China and North Korea? 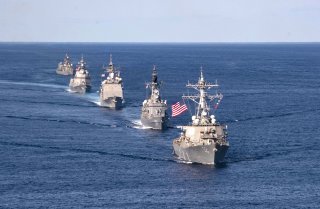 PRESIDENT-ELECT Joe Biden will face no greater challenge than China and the broader Indo-Pacific. The decision facing a potential Biden administration is whether to adopt Donald Trump’s policies towards China and North Korea, or to attempt a “reset” aimed at returning to traditional engagement and negotiation. On China, such a step backward risks emboldening Beijing, while few good options on North Korea make a resumption of talks a low-risk, yet likely unfruitful path.

The principal foreign policy achievement of the Trump administration was to overturn four decades of bipartisan engagement with the People’s Republic of China (PRC), and instead adopt a harder-edged policy of reciprocity. While unevenly executed, as with all policies, the Trump approach nonetheless dramatically reoriented U.S. policy towards Beijing, especially after the outbreak of the global coronavirus pandemic in Wuhan, China, and Beijing’s attempts to both cover up the pandemic and blame Washington. The administration reclassified the country as a strategic competitor aiming at displacing America from its position of global dominance and released a raft of policy documents and strategies designed to blunt its growing global influence and aggressive behavior. Before the pandemic, though largely forgotten now, was a more than two-year trade war with the goal of correcting structural imbalances in the bilateral economic relationship.

After initially dismissing the China threat, Biden attempted to play catch-up by stating that a tougher line towards Beijing was indeed necessary. The question for Biden is where to hold the line, where to compromise, and where to get tougher. On all counts, it will be easier to compromise, to attempt to show “good faith,” “lower the temperature,” and return to “normalcy.” Doing so, however, would risk convincing Beijing that it had withstood the worst that Washington could throw at it, and double down on the predatory and aggressive behavior that caused both presidential candidates in 2016 to contemplate changing U.S. policy in the first place.

On security, Biden needs to demonstrate, not just claim, that America will maintain its military commitments in Asia. Above all, Biden must continue the Trump administration’s strong political support for Taiwan, given numerous signals that Beijing intends to ramp up its pressure on the doughty island. Given the PRC’s crushing of Hong Kong’s democracy, defense of Taiwan’s independence is even more critical, as well as vital to maintaining Washington’s credibility in the eyes of Asian allies. Nor should Biden reduce the frequency of U.S. Navy freedom of navigation operations in the South China Sea, which were dramatically increased starting in 2017.

Closely related to overseas security issues is security at home, and a Biden administration should maintain Trump’s focus on countering Chinese espionage operations, as well as targeting Beijing’s use of People’s Liberation Army officers and the “Thousand Talents” program to gain access to leading American research institutions, not to mention on-going pervasive cyberattacks on American businesses.

Economic relations will prove critical over the next four years, as China will pressure Washington to end the Trump tariffs and relax restrictions on Chinese technology companies. Biden should press forward on negotiations over structural trade imbalances, and not hesitate to impose sanctions for failure to live up to the phase one agreement. More importantly, he should maintain restrictions on Huawei and ZTE, and champion a 5G alternative alliance of America and its closest allies, particularly Great Britain and Japan. It will undoubtedly fit Biden’s policy preferences to explore rejoining the Trans-Pacific Partnership, now slightly relabeled and led by Japan; this should be pursued, along with expanding the now “Comprehensive and Progressive Trans-Pacific Partnership” to new nations, including South Korea, India, and even Great Britain and France.

One of the Trump administration’s most significant achievements was to publicize Beijing’s global propaganda and influence campaigns. Biden must not be gulled into thinking that better bilateral relations can come from accepting more Confucius Institutes without corresponding opportunities for American culture centers to be opened in China, or in allowing Chinese state-sponsored journalists free reign while American correspondents are reduced in number and ability to report. Biden should also focus on countering Chinese pressure on U.S. businesses and organizations that self-censor criticism of the PRC or grovelingly apologize for supposedly offending Chinese sensibilities.

In short, Biden should hold the line against Chinese pressure tactics and continue to press for reciprocal treatment on economics and security. Otherwise, he will face a dramatic increase in Beijing’s predatory behavior that will increase risk in Asia and beyond.

As for North Korea, Biden will face the same limited set of options that bedeviled Trump. Whereas Trump chose a high-risk, high-reward strategy of engaging directly with Kim Jong-un, to little effect, Biden is likely to revert to a traditional U.S. posture of working-level negotiations. Given Pyongyang’s undeniable capabilities, he will have to decide whether or not to accept North Korea as a nuclear-capable state, thereby shifting the security discussion to containment and arms control, or continue with the fiction that denuclearization is possible short of regime change.

Whatever course he chooses, political uncertainty about Kim’s health and control over the state, along with Pyongyang’s predilection for testing new administrations, means that Biden will likely face a North Korean provocation, if not an outright crisis, early in his term. Fostering close consultation and action with South Korea and Japan will be vital, and Biden should grasp the nettle of shepherding Tokyo and Seoul into closer working relations, while preparing a set of credible responses to any North Korean aggression. Any impression of indecisiveness vis-à-vis North Korea, as with China, would invite far more destabilizing behavior in the world’s most strategically vital region.

Michael Auslin is the Payson J. Treat Distinguished Research Fellow in Contemporary Asia at Stanford’s Hoover Institution, and is the author most recently of Asia’s New Geopolitics: Essays on Reshaping the Indo-Pacific.