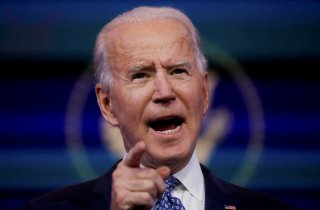 THE MOST pressing imperative facing the incoming president, Joe Biden, is to pacify the ongoing and increasingly tense civil conflict between America’s coastal elites, who are liberal and globalist in outlook, and the nationalist/traditionalist folks of the heartland, who feel beleaguered by those elites. In order to do this, he will have to build a governing coalition that starts with a large segment of his Democratic base but also seeks to draw in more moderate elements of the opposition. If he tries to govern strictly from the Left, as his party will want, the civil conflict will continue and deepen, Biden’s government will seize up, and he will fail.

Donald Trump’s strong popular-vote showing, along with the outcomes in congressional balloting and state-legislative races, makes clear that American politics continues to reside on a knife’s edge of political parity and mutual hostility. There will be no wave of popular support of the kind that Franklin Roosevelt could summon after his strong 1932 election, or that Ronald Reagan commanded after 1980. If Biden is to succeed he must generate his own wave through the delicate art of governing.

Will he do it? Not clear. Can he succeed even if he tries to do it? Less clear. The president-elect’s party, still traumatized by the very emergence of Trump, will want Biden to govern as if the incumbent’s defeat on November 3 places the country back where it was before the vulgar billionaire crashed the political scene four years ago. That would mean policies and pronouncements denoting the party’s continuing view of Trump supporters as “deplorables.”

But Trump, for all of his limitations as a national leader, transformed the American political landscape by bringing new issues and new sensibilities to the Republican Party and the nation, and things aren’t going back to where they were when the party was led by the likes of Jeb Bush. That’s a reality Biden needs to absorb.

Consider, for example, the issue of immigration, the most incendiary of the cultural conflicts facing the country. Many Trump supporters believe the Democratic establishment favors relatively open borders as a means of transforming the essence of America in ways they oppose. And Democratic liberals consider resistance to their broad migrant hospitality to be a form of racism. This divide contributes significantly to the civil strains roiling America, and it’s difficult to see how Biden can bridge this gap and fashion a moderate consensus that can capture the center and neutralize the high-voltage passions emanating from the extreme wings of both parties.

Most likely he won’t try but will instead employ his executive authority to foster and encourage greater immigration flows, thus perpetuating the tensions and anxieties generated by the issue.

Similar questions surround other major domestic matters. Can he craft a trade policy that keeps overseas markets open to U.S. goods while protecting the interests of working-class Americans devastated by past unfair practices by American trading partners, particularly China? Can he piece together a health-care system that expands coverage without introducing widespread inconvenience (such as rationing) for those seeking medical attention? And can he reconcile economic-growth imperatives with the importance of fiscal responsibility?

On foreign policy, Biden faces one issue that dwarfs all others, and that is China. The People’s Republic, a major global competitor in the realm of economic power, now seeks geopolitical dominance in East Asia (through naval power) and what the famous early-twentieth-century British geographer Halford Mackinder called the Eurasian Heartland (through infrastructure dominance and possibly, in the future, land power). America must decide if it will accept these surges of power—particularly in East Asia, as the realization of China’s ambitions there would mean that America eventually would be kicked out of the region. But Chinese dominance of the Eurasian Heartland carries other global hazards, since China then would be positioned to threaten Western Europe and Russia.

Some suggest that, given these developments, war between America and China is inevitable. Perhaps, but not necessarily. Through deft and imaginative diplomacy, and the building of alliance coalitions to bolster U.S. influence in the region, the country could signal its seriousness and perhaps foster a peaceful, though uneasy, accommodation with China.

This also suggests that the United States must clear the decks of its own geopolitical thinking so as to not get distracted from the primary challenge through counterproductive diplomatic and military actions elsewhere around the world. The country thus should extricate itself from “forever wars” in the Middle East and from unnecessary tensions with Russia and India, two nations that have been traditional Chinese adversaries.

But the challenge here is fearsome and the requirements of diplomacy daunting. Is Biden up to it? Judging from some of his past statements on China, this would seem to be an open question. “They’re not bad folks, folks,” he said early in the campaign. “But guess what? They’re ... not competition for us.”

That’s a remarkable statement from the former chairman of the Senate Foreign Relations Committee. American foreign policy today should begin with an understanding that they are competition for us and see themselves as such. Then we can get to the question of how we should deal with that fundamental reality.

Robert W. Merry, former President of Congressional Quarterly and Editor of The National Interest, is the author most recently of President McKinley: Architect of the American Century (Simon & Schuster).