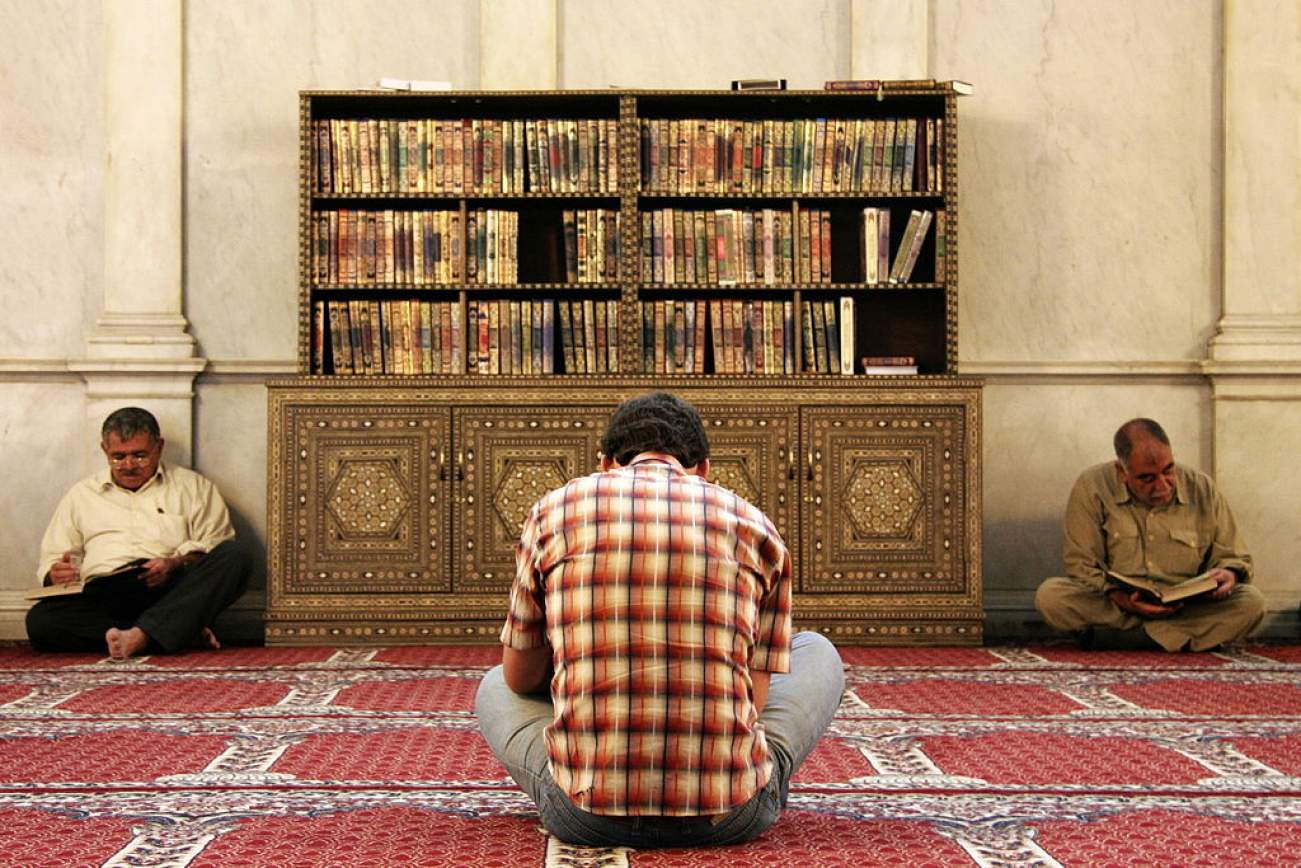 “I NO sooner perceived myself in the world,” wrote English philosopher John Locke, “than I found myself in a storm.” Locke was referring to the maelstrom of religious fanaticism and intolerance that was tearing apart the social fabric of post-Reformation Europe. Born in 1632, Locke’s life encompassed one of the most turbulent periods of European history. The problem was not only the enmity and power struggles between Protestants and Catholics. Despite an official end to the wars of religion with the Treaty of Westphalia in 1648, militant Christianity could still destabilize governments, provoke mob violence, persecute religious dissenters and create a refugee crisis in the heart of Europe.

We can hardly ignore the parallels between Locke’s world and our own: the Syrian Civil War, the rise of the Islamic State, the horrific assaults on religious minorities, the massive flow of refugees from the Middle East, and the widening conflict between Sunni and Shia Muslims. The repression and violence in the wake of the Arab Spring has exposed the fundamental crisis in modern Islam: a culture of intolerance reminiscent of Europe’s legacy as a persecuting society.

When President Obama addressed Muslims worldwide in his celebrated 2009 speech in Cairo, he praised Islamic history for demonstrating “the possibilities of religious tolerance.” Speaking before the United Nations five years later, his mood was considerably darker. Though denying that America was at war with Islam, Obama warned of “the cancer of violent extremism that has ravaged so many parts of the Muslim world.” Even President Abdel Fattah el-Sisi of Egypt speaking at Al Azhar University in January 2015, made an impassioned plea for “a religious revolution” to stymie extremist Islam that has “antagonized the entire world.”

THE CAREER of Locke is central to the story of how the West accomplished a similar revolution to defeat two of the most intractable problems of European society: militant religion and political absolutism. The problems were inextricably linked—as they are today—and Locke produced seminal and radical responses to both.

Against the deepest prejudices of European culture, Locke defended liberty of conscience for people of all faiths—including pagans, Jews and Muslims. Locke’s A Letter Concerning Toleration (1689), with its singular persuasive power, ranks as the most important defense of religious freedom ever written. Against the assumptions enshrined in centuries of political rule, Locke insisted that governments that trample the natural rights of their citizens forfeit political legitimacy. His Two Treatises on Government, published in 1690, became a catalyst for revolutionary movements dedicated to human equality, freedom and government by consent. Taken together, they form the pillars of the liberal-democratic tradition.

Locke’s ambitions as a political and religious reformer are often misunderstood. He lived during a period when Christian norms and observances were still infused with Europe’s political and civic life. He watched with dismay as attempts to enforce religious orthodoxy inflamed sectarian hatreds and criminalized entire categories of religious believers. Locke composed his Two Treatises against political despotism when anti-Catholic hatreds threatened to plunge England into another civil war. His Letter Concerning Toleration was a direct response to Catholic absolutism in France, where the revocation of the Edict of Nantes sparked a violent crackdown on Protestant Huguenots, forcing hundreds of thousands to flee for sanctuary.

No progress toward a more liberal and tolerant society was possible, Locke reasoned, without a revolution in the theological outlook of political and religious authorities. Thus he began with a radical reinterpretation of the life and teachings of Jesus—“the Captain of our salvation”—to argue for a new kind of political commonwealth. “The sum of all we drive at,” he wrote, “is that every man may enjoy the same rights that are granted to others.” Like no thinker before him, Locke forged an alliance between liberal political theory and a gospel of divine mercy.

LOCKE IS largely ignored, however, as Western thinkers confront the contemporary problem of religious extremism—dismissed by conservatives for his alleged Enlightenment skepticism and by liberals for being insufficiently progressive in his politics. Jonathan Israel, professor emeritus of modern European history at Princeton University, argues that Locke’s defense of toleration was hobbled by narrow theological premises. In the end, Israel says, Locke produced “an ungenerous, defective, and potentially menacing theory.”

Meanwhile, a growing number of liberal-minded Muslims see Locke as an intellectual ally: a deeply religious believer and reformer whose political theology could help them confront the crisis of modern Islam. In Islam, Secularism, and Liberal Democracy, Nader Hashemi praises Locke for retaining the moral authority of scripture as he advanced his agenda for political reform. Hashemi, director of the Center for Middle East Studies at the University of Denver, argues that Locke’s entire effort “was rooted not in a rejection of Christianity but rather in a reinterpretation of it.” The Lockean campaign for religious reform, he concludes, was a “critical precondition” for a more progressive political order.

Turkish columnist Mustafa Akyol, author of Islam Without Extremes, argues that an “Islamic liberalism” that rejects secularism provides the strongest basis for individual freedom. In a column for the New York Times, Akyol—in a nod to Locke—offered “A Letter Concerning Muslim Toleration.” He believes that a Lockean tradition has long existed in Islam, and points to an early school of Muslim thinkers who viewed faith as “a marifa, an inner knowledge of the heart”—beyond the coercive reach of mosque or state. “If Islamic thought is to liberalize today,” he predicts, “It must take a Lockean leap.”

What might such a leap of faith involve? It might begin, paradoxically, with an appeal to reason. Ever since the Enlightenment, educated people have been taught to regard religious belief as an enemy of rationality; there is no intellectual bridge between Athens and Jerusalem. Locke, one of the fathers of modern philosophy, rejected this view as a misunderstanding of the nature of biblical religion.

The entire first part of the Two Treatises is a Bible-based assault on Robert Filmer’s apologia for absolute monarchy. Mixing careful scriptural exegesis with relentless logic, Locke denies the claim that most men are destined to live in subjugation to others: “Scripture or reason I am sure do not anywhere say so, notwithstanding the noise of divine right, as if divine authority hath subjected us to the unlimited will of another.” Only after demolishing the rationale for unchecked power in the First Treatise does Locke make his famous natural-rights argument for liberty and equality in the Second Treatise.

In his Letter, Locke takes authorities to task for imagining that authentic faith could be produced by threats and coercion, rather than through reason and persuasion. Despite a strict Calvinist upbringing, Locke rejects a determinist view of faith; human agency retained a crucial role in the act of believing. “But true and saving religion consists in the inward persuasion of the mind, without which nothing can be acceptable to God,” he writes. “And such is the nature of the understanding, that it cannot be compelled to the belief of any thing by outward force.”

Locke understood his audience. With the advent of the scientific revolution, Protestant leaders had embraced the concepts of “right reason” and a “reasonable Christianity,” which emphasized the rational basis for faith. Locke pushes these ideas toward their logical conclusion, namely, that the responsible use of reason in apprehending religious truth is within the reach of every person. I call this Locke’s “democratic conscience,” the private realm of belief, informed by reason, experience and the moral sense.

Indeed, throughout the Two Treatises and the Letter, Locke assumes the universal quality of reason. Nowhere is there any distinction made between individuals in their basic competence to discern moral and spiritual truths; the king has no decisive advantage over the cobbler. “Those things that every man ought sincerely to inquire into himself and by meditation, study, search, and his own endeavours, attain the knowledge of, cannot be looked upon as the peculiar profession of any one sort of men.”

Next to the Bible, human reason was for Locke the most important source for discovering truth, including the ideas of equality and man’s natural rights. The faculty of reason, as assuredly as the Bible, “teaches all mankind who will but consult it, that being all equal and independent, no one ought to harm another in his life, health, liberty, or possessions.” Likewise, both sources of knowledge—reason and revelation—exposed the fallacy of religious intolerance to any honest seeker.

Toleration of those that differ from others in matters of religion is so agreeable to the Gospel of Jesus Christ, and to the genuine reason of mankind, that it seems monstrous for men to be so blind as not to perceive the necessity and advantage of it in so clear a light.

The boldness of Locke’s challenge to the social structures of seventeenth-century European society is breathtaking. To occupy a lower social order implied a diminished or impaired ability to grasp religious knowledge. At the same time, European church establishments claimed for themselves monopoly rights to interpret all significant matters of faith and conscience. Locke’s appeal to the individual conscience—informed by the Bible and endowed with the “light of reason”—defied their cultural authority and political prerogatives. In the intensely hierarchical society of Locke’s day, here is a thoroughly, radically egalitarian view of human capacities.