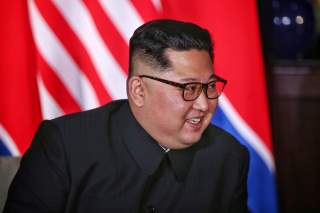 North Korean leader Kim Jong-un has done a good job of playing statesman on the world stage. Kim secured a historic summit with American president Donald Trump and appears to be systematically engaging in more diplomatic visits. Kim has built on the previous momentum from meeting with Trump in Singapore and is enjoying the global spotlight. Through all of his travel, Kim seeks to reshape North Korea's global image and further weaken sanctions against his country. But will it work?  It helps to understand just how broad and comprehensive Pyongyang's outreach had been. Kim's charm offensive began with joining South Korea in the 2018 Winter Olympics in February. Pyongyang acted friendly and had sent a delegation to Seoul that included officials who were barred from traveling. This was done by Kim both to test sanctions and to make his sudden peacefulness seem credible. Afterward, Kim met with Chinese president Xi Jinping and proceeded to meet with him two other times since then. On April 27, Kim also held a summit with South Korean president Moon Jae-in, making history by crossing over briefly into South Korean territory. Kim also later met with Moon a second time on May 26.

On May 16, Kim welcomed a high-level ministerial visit from India—the first such visit in twenty years. The infamous Trump-Kim summit happened on June 12 and on July 10 Kim directed his foreign ministry to focus on improving relations with America, Russia, and China.

Kim returned the remains of some Americans killed in the Korean War on July 27, the armistice anniversary. Furthermore, Kim made a point of taking down anti-American posters and did not mandate country-wide U.S.-denunciation meetings as during previous armistice anniversaries.

Most recently, on August 1 North Korea returned one South Korean national who had been detained for allegedly trespassing (however there are six other South Koreans who are still held). Additionally, officials from both Koreas have engaged in several joint inspections of the environment and railroads in the North, raising the possibility of cooperation on forest preservation and linking transportation networks. On August 7, Trump offered another visit by U.S. Secretary of State Mike Pompeo to Pyongyang to work on denuclearization. If Pompeo did visit, it would be his fourth so far.

Finally, there is an inter-Korean workers football match scheduled for August 11, which would be the fourth such game since the last one in 2015. In attendance will be a sixty-four member delegation from North Korea. As if all of this weren’t impressive enough for a small nuclear pariah, Kim has a standing invitation from Russian president Vladimir Putin to visit in September, and it appears that Japanese prime minister Shinzo Abe is interested in a summit as well.

Given that North Korea’s economy is estimated to have contracted by 3.5 percent in 2017, it is not surprising that—as in times past—Pyongyang is looking for a way to break or reduce sanctions. As one North Korea official secretly told DailyNK in an interview, “It is true life in North Korea is hard and that there are almost no rations from the government. There are some places that only give two-weeks worth of rations and people make up for the lack of food by going into business and cooking corn porridge, and some people even die due to the lack of food.”

Added to the disaster of North Korea’s command economy is an ongoing heat wave that has devastated crops, persistent electricity shortages, and sanctions that are—more often than not—enforced by Russia and China. Kim has implemented a limited number of reforms, such as switching from communal farms to family ones. North Korea has also allowed some limited competition, private property, and at times ignores black markets out a grudging nod to the reality of supply and demand. But in the face of sanctions and the inefficiencies of communism, these meager changes are not enough.

So far, all of Kim’s diplomatic outreach has yielded mixed results. China has—to no surprise—loosened its enforcement of sanctions now that the pressure seems to be reduced after the Singapore summit. China has announced that it will be funding a bridge to North Korea to the tune of $88.4 million and claims it is allowed since Pyongyang has committed to complete denuclearization. However, Beijing has also not resumed normal levels of trade or smuggling. For instance, sanctioned North Korean ships are waiting off of the Chinese coast, possibly hoping for restrictions to be eased or for a chance to illegally take on oil.

Russia still exports some fuel to North Korea, as do Turkey and South Africa, in spite of sanctions. Finally, South Korean companies appear eager to invest in North Korea. They see the thaw in inter-Korean relations as a chance to tap into North Korea’s cheap labor force, vast untapped resources, and the general potential for growth in a communist country that Kim may yet try to reform. Many of these companies, such as Samsung C&T Corporation, as well as Seoul officials, are lobbying Washington and the United Nations for sanctions exceptions. They claim that without the ability to trade, it will be harder to realize peace and nudge Kim towards denuclearization. The United States, however, wants to see results on denuclearization before it considers any sanctions relief—a position that acknowledges North Korea's history of broken promises but that fails to recognize denuclearization will take time.

Whether Kim denuclearizes or not, he knows that North Korea needs sanctions relief and that good relationships with other leaders and a positive image are the way to get it. Therefore, we should expect to see him continuing his charm offensive through new trips and dramatic gestures of diplomacy. It doesn’t matter to Kim if other countries violate sanctions or if America decides to reduce them—he’ll just smile for the camera and shake hands until it happens.

John Dale Grover is an assistant managing editor at The National Interest. He is also a fellow at Defense Priorities and a writer for Young Voices. His articles have appeared in The American Conservative, Fox News, and Real Clear Defense. Follow him on Twitter @JohnDaleGrover.