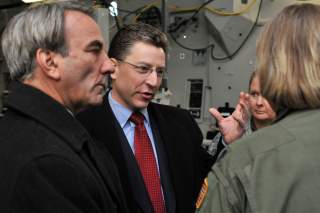 As Donald Trump spoke with Russian president Vladimir Putin in Hamburg late last week, his State Department announced the appointment of a tough-minded former NATO ambassador to serve as Washington’s new point man on Ukraine. His mandate is to help implement the Minsk agreements. Kurt Volker is widely respected as an accomplished diplomat, but in Ukraine he confronts his greatest challenge yet.

Volker was last seen in government in the early days of the Obama administration, a holdover at NATO installed by President George W. Bush. Volker had taken office a month before Russia invaded Georgia in August 2008. Whether such timing shaped Volker’s views on the Kremlin, or merely cemented them, is unclear. But it is largely undisputed, in both Washington and Moscow, that in choosing Volker, Rex Tillerson has opted to appoint a Russia hawk who also believes in diplomacy. This mixture may allow him to tackle successfully a dividing point between East and West that has thwarted previous efforts to resolve it. According to Paul Saunders, the executive director of the Center for the National Interest and a former George W. Bush administration official, “Kurt Volker is an experienced and tough-minded diplomat who knows how to combine principles and pragmatism into policy. He is widely respected across the political spectrum.”

“Although he may be seen as hawkish by the Russian side, he will certainly be taken seriously,” says Matthew Rojansky, director of the Kennan Institute at the Woodrow Wilson Center, of the new special representative for Ukraine negotiations, whose vaunted resume also includes stints at the National Security Council, CIA and Foreign Service. “Volker’s appointment will be welcomed by our European allies and by the Ukrainian government.” Tillerson, who travelled to the G-20 with Trump last week, called Volker “uniquely qualified” to move the Ukrainian conflict “in the direction of peace,” in a statement announcing the appointment.

During his Hamburg meeting with Sergey Lavrov, the longtime Russian foreign minister, the only time the subject of Ukraine was broached was to discuss Volker, Tillerson said.

Volker’s specially created position does not need Senate confirmation, so he has gotten straight to work. Both the secretary and his new envoy were in Ukraine on Sunday, before Tillerson departed for Kuwait. In Kiev, the United States vowed continued sanctions on Moscow until it “reverses the actions” that prompted their introduction in the first place—Russian sponsorship of Ukrainian separatists and the 2014 annexation of Crimea.

“Russia has sought to overturn the post-Cold-War settlement of Europe by redrawing borders using military force. Russian forces occupy parts of Ukraine, Georgia and Moldova, and in a brazen show of force, Russia simply annexed the Crimean peninsula,” Volker, then part of the McCain Institute at Arizona State University, told the Senate Foreign Relations Committee in April.

Volker’s published writings during his time out of government also may give clues to how he plans to approach this role. In 2015, he called for harsher, far more targeted sanctions than what the Obama administration had signed off on.

“The United States should also continue to raise the sanctions stakes on Russia. Travel and financial sanctions on Putin and his family would be appropriate at this point,” Volker wrote in Foreign Policy. “Only through steadfast resolve . . . can we convince Putin that the costs to him personally, and to Russia, are unbearable.”

Placing sanctions on Putin personally would be similar to how the United States treats North Korean leader Kim Jong-un. In 2015, Volker called on the European Union to participate in travel restrictions as well, setting up the prospect of the leader of Russia essentially locked out of the democratic West. Such a policy wasn’t put in place even in the Cold War.

Putin himself seemed satisfied with his first sit-down with President Trump on Saturday. “Trump’s T.V. persona differs sharply from the real man,” Putin told reporters. “He is a very straightforward person, grasps precisely what his interlocutor says, quickly analyzes and responds to questions or new elements of the discussion.”

Meanwhile, Trump over the weekend appeared to again express his doubts that the Russian state interfered in the 2016 election. Putin “vehemently denied it,” Trump tweeted. “I’ve already given my opinion.”

In his April Senate testimony, however, Volker indicated he believes that Russia engages in a larger campaign to undermine Western democracies. His language could not have been starker. Russia “has engaged massively in advancing propaganda throughout Europe” and “used ‘fake news’ and hacking and trolling to influence and distort European public perceptions about issues,” he told the committee.

Now Volker will have to use a blend of toughness and diplomatic skills to help resolve the Ukraine problem. According to Rojansky, Volker’s main “challenge will be to act in clear concert with the rest of the Trump administration, including the White House, so that his interlocutors on all sides view him as the president’s representative.”