Can Lasers Save America's Military Dominance? 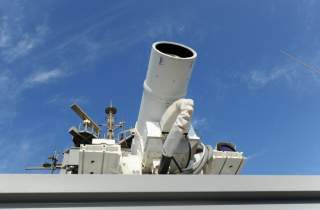 Technology is an indispensable component of war. Since the first human picked up a rock in anger, warfighters have leveraged technology to increase their advantage on the battlefield. In modern times, technology has allowed combatants to fight at vast distances, launching missiles across the globe, and has expanded warfare into the air, undersea and into space.

Modern militaries invest heavily in new technologies to modernize their forces, but determining which technologies hold the greatest promise is more art than science. It requires militaries to think on multiple levels simultaneously.

They must assess the potential utility of a new technology—how much operational or strategic value it will convey. They must weigh the maturity of the technology and the likelihood that their investments will pay off. And they must assess their investments relative to both alternative investments and potential adversary countermeasures that might negate or erode their hard-fought advantages. All of these decisions must be made under conditions of extreme uncertainty and possibly enemy deception.

Furthermore, some new technologies—whether novel or proven—applied in combination with new concepts of operation, organization, training, and doctrine, can lead to significantly disruptive changes in warfare that alter the very character of how militaries fight and the metrics for what makes weapons useful. Investing in improved stirrups for horse cavalry in the 1920s, for example, would have been a poor use of resources when adversaries were developing tanks that would revolutionize land warfare.

The U.S. military is the most technologically advanced on the planet, and yet it frequently gets these assessments wrong. The list of failed “next-gen” acquisition programs is long and inglorious, and in many cases even sizable investments have proved insufficient to overcome technology limitations or developmental failures.

In the current fiscal environment, the Department of Defense (DOD) must husband its resources closely. DOD cannot afford to place bets everywhere, on every technology area that might show promise. At the same time, the U.S. military’s strategic advantage is waning as many of the key technologies that have underwritten U.S. supremacy—precision strike, satellites, stealth and advanced communications, among others—proliferate to others. The U.S. military will have to invest, and invest wisely, in those areas most likely to sustain its competitive advantages in the years ahead.

In the face of these challenges, DOD leaders have declared the search for a “third offset strategy,” to follow the two 20th-century “offset strategies:” nuclear weapons and precision strike. No single technology or even group of technologies will be a silver bullet for the challenges the U.S. military faces, however.

The United States faces too diverse an array of challenges, from terrorists to cyberthreats to nuclear-armed rogue states to near-peer competitors, which require qualitatively different responses and forces. Many of the actions DOD must take to prepare for today’s threats center on increasing strategic agility—the ability to adapt rapidly to a changing security environment.

Nevertheless, DOD must also make smart choices about where to invest more than $60 billion annually in research and development. To help identify the most critical technologies, DOD has launched a Long-Range Research and Development Program Plan as part of the new Defense Innovation Initiative. Making the right investments today could help ensure that DOD has both improved capabilities and a greater set of options for out-years acquisition. A failure to invest could forgo those potential advantages or, at worst, cede the advantage in a critical area to others.

Few weapons have held as much promise—and have consistently failed to live up to that promise—as directed-energy weapons. Since the 1960s, DOD has sought directed-energy weapons such as high-energy lasers or high-power microwaves. Directed energy has the potential to yield cost-effective weapons that can deliver precise, scalable effects—and at long ranges—with a large magazine capacity.

Actual directed-energy programs, however, have frequently fallen short of expectations. In the 1990s and early 2000s, for example, DOD spent billions in aggregate on high-energy laser programs such as the Airborne Laser and Space-Based Laser, both of which ultimately failed to reach maturity.

At the turn of the millennium, defense commentators crowed that another “revolution in military affairs,” empowered in part by directed-energy weapons, was just around the corner. DOD itself argued that directed-energy weapons were “ready for some of today’s most challenging weapons applications, both offensive and defensive.” After several decades of investment, billions of dollars and several canceled programs, DOD has yet to successfully field an operational directed-energy weapon system.

Over the past few years, however, even as DOD scaled back its expectations and funding from the highs of decades past, directed-energy technologies have steadily and quietly matured. While more modest in power than the aspirational Airborne and Space-Based Laser programs, today’s directed-energy weapons have reached a point of operational maturity. Current-generation tactical lasers have been demonstrated in realistic operational settings against realistic threats.

Such technologies have matured to the point where an operationally relevant payload can be carried on a cruise missile or drone, potentially providing commanders a unique non-kinetic capability to disable or destroy enemy electronic systems.

After a nearly half-century quest, the U.S. military today is on the cusp of finally fielding operationally relevant directed-energy weapons. While megawatt-class lasers to shoot down ballistic missiles remain, for now, a distant prospect, today’s tactical lasers are potentially useful, cost-effective approaches for countering threats such as low-cost drones and small boats. High-power microwaves open up new avenues for non-kinetic effects, a significant advantage for controlling escalation or limiting collateral damage.

Perhaps the most significant benefit to fielding these nascent directed-energy capabilities, however, is that they will start the crucial process of integrating a new technology into operations, with the attendant innovations required in organization, training, concepts of operation, and doctrine. Beginning the crucial process of experimentation and concept development to learn how best to employ directed-energy weapons will be critical to ensuring that, as directed-energy technologies continue to mature, DOD is best postured to benefit.

The Center for a New American Security (CNAS) recently released a new report on directed energy weapons by Dr. Jason Ellis, a visiting senior fellow at CNAS on leave from Lawrence Livermore National Laboratory. This report provides a much-needed guide to this important capability area and offers a candid and objective assessment of the maturity of directed-energy weapons today and what developments may be possible with continued DOD investment.

Ellis’ report concludes with recommendations for how DOD should proceed in this area, mindful of past failed promises but driven by the inherent warfighting potential that directed-energy weapons hold. As DOD senior leaders look to better understand the opportunities and feasibility of various candidate technologies for investment, this report provides a valuable resource to help inform their decisions.

Paul Scharre is Director of the 20YY Warfare Initiative at the Center for a New American Security. This article is adapted from the preface to CNAS’ recent report, Directed Energy Weapons: Promise and Prospects, by CNAS Visiting Fellow Jason Ellis.