Can Macron and Trump Bring Stability to the Indo-Pacific Region? 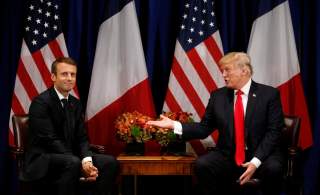 For the last seven decades, the alliance between the North America and Europe has undergirded peace, freedom and prosperity across the Atlantic.

President Emmanuel Macron’s state visit to Washington presents a perfect opportunity to build upon that achievement and extend the benefits of this remarkably successful partnership to the Indo-Pacific region.

The region certainly could use a dose of stability. The geopolitical situation in the Indo-Pacific region is more precarious than it has been in many years—thanks largely to the rise of China and its overt revisionist ambitions. Beijing’s active, extralegal pursuit of territorial claims in the East and South China Seas, its ongoing border disputes with India, and its increasingly aggressive posture toward Taiwan are symptomatic of a much bigger challenge—one that can be addressed effectively only through collective action.

The U.S. commitment to the Indo-Pacific region is firm. The Trump administration has issued numerous official diplomatic statements to that effect. And standing behind those statements is the U.S. military. Hundreds of ships, more than a thousand aircraft, and tens of thousands of troops remain forward deployed in the region.

France, too, is deeply committed to the region. It maintains air and naval assets and thousands of troops in defense of its territories and other interests in the Indo-Pacific region. It also routinely bolsters it presence in the region with temporary deployments of additional ships, thereby underscoring its commitment to freedom of the seas.

All of this, however, is not enough to assure stability in the region—not even with the contributions the UK, Japan, Australia, India and other allies and partners active there.

It is not just about the number of assets.

Trump and Macron can get the ball rolling toward better strategic coordination by focusing on three critical priorities.

First, the two nations need to establish a clear, consistent message about their China policy. Europeans widely recognize America’s firm commitment to Asia. But on a day-to-day basis, it is sometimes difficult to discern whether Washington regards Beijing as principally a challenge to regional order or a like-minded partner.

There are inconsistencies on the European side as well. In Paris in particular, concern with China’s Belt and Road Initiative (BRI) has reached a critical stage. Europe, however, remains deeply divided on the issue, with many of its capitals seeing mostly opportunity—and little downside—in their relationships with China. Even President Macron sent mixed messages on his trip to the People’s Republic of China, which is when he clearly warned that the BRI cannot be “one way.” For France, as for the United States, it seems that even if China is becoming more of a problem, it still occupies center stage in their interest for the region at the prejudice of other partners like Japan.

Second, the West needs to do a better job distinguishing friend from foe. The Europeans, concerned with actions by the Trump administration, sometimes muddle the very real differences between the United States and authoritarian regimes like China. American values and institutions are strong. And if European allies take a close, dispassionate look at the Trump administration’s official policies and actions in Asia, then they will see many of the values they are so concerned are missing.

As for the United States, it must be more sensitive to the global impact of its trade policies. If China is the problem, it should build consensus with its allies on an approach to those abuses, not take unilateral action that also targets friends and allies. Recent U.S. trade actions have also weakened institutions—like the World Trade Organization—that we built together. This ham-fisted approach only enables China to play its usual dividing game.

Third, France, the United States and other like-minded European allies should commit to regular, higher-level coordination on their Indo-Pacific strategy. While meaningful coordination already exists, it seldom rises to political-level interaction except in dire circumstances—such as the situation on the Korean Peninsula.

A good start might be an endorsement of the free and open Indo-Pacific concept in a Trump-Macron joint statement. This would be a natural build-on to President Macron’s remarks in India a few weeks ago, when he mentioned the role France might play in maritime cooperation from the Indian Ocean side, and a perfect link in the Trump administration’s continuing roll out of its strategy.

The United States and Europe share many interests. Equally importantly, they share values. Both parties—as well as the Indo-Asian region—would benefit greatly if they fully harnessed these connections strategically. Presidents Trump and Macron, known for their pragmatism and capacity to think “out of the box,” could put U.S.-Europe relations on a track to do just that.

Walter Lohman directs the Asian Studies Center of the Washington, DC-based Heritage Foundation. Valerie Niquet is the head of the Asia department of the Paris-based Foundation for Strategic Research.