Can Pakistan Remain Neutral in the Saudi-Iran Rivalry? 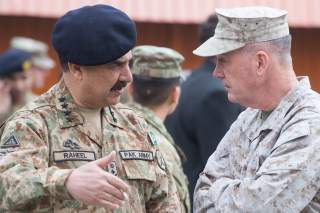 Islamabad has given clearance to recently retired chief of army staff Gen. Raheel Sharif to command what is being described as a “Muslim NATO” based in Saudi Arabia. Sharif’s new position is expected to be announced later this month in Riyadh. Though the mission and activities of the coalition (known as the Islamic Military Alliance to Fight Terrorism or IMAFT) are unclear, Sharif’s involvement in the Saudi-led initiative could disrupt Pakistan’s delicate balancing act vis-à-vis- Iran and Saudi Arabia, the two major powerhouses in the Muslim world locked in an ugly cold war. Still, while there are risks associated with the move, they are outweighed by its potential benefits.

Sharif’s acceptance of the Saudi offer was first reported in early January, but he was only given clearance, also known as a “No Objection Certificate,” in late March, after Pakistani civilian and military officials informed their Iranian counterparts of the move. The former army chief reportedly told Saudi leaders that he would accept the position on the condition that the coalition would not be anti-Iran and even requested to play a diplomatic role in easing tensions between Riyadh and Tehran. Nonetheless, this week the Iranian ambassador to Pakistan indicated that his government was not in favor of the move.

In all likelihood, the Saudi-led IMAFT will exclude Iran, but will not be anti-Iran, focusing instead on counterterrorism. Those close to Sharif have said on Pakistani television that the coalition will promote intelligence sharing between Muslim-majority countries, which is critical as foreign fighters from the so-called Islamic State return to their home countries. Neither Sharif nor the coalition itself is likely to engage Iran in proxy wars, such as the disastrous Yemen war.

Mainstream and Shia political parties in Pakistan, including the Pakistan Tehreek-e-Insaf, led by ex-cricketer Imran Khan, have criticized the government for allowing Sharif to head the Saudi-led group. They argue that Sharif’s leadership amounts to Pakistan taking a side in the Iran-Saudi regional war. In 2014, Pakistan’s parliament passed a resolution calling for their government to adopt neutrality in the Yemen war, after Riyadh has presumptuously announced that Islamabad was part of its coalition to restore the Hadi government.

Pakistan’s non-participation in Yemen combat operations was the right decision. The Yemen war is a strategic and humanitarian disaster, causing over ten thousand deaths and putting the poor country on the “brink of famine”—all while failing to dislodge the Houthis and restore Hadi to power. Pakistan was able to focus on its war within. Civilian fatalities due to terrorism declined by 80 percent from 2013 into the end of 2016, sectarian violence deaths also dropped by around 75 percent over this period.

Still, Islamabad paid a price for not participating in combat operations in Yemen. Ties with Riyadh reportedly cooled and the United Arab Emirates tightened its embrace of New Delhi, Islamabad’s arch-rival. Relations with Qatar and other Gulf Cooperation Council (GCC) countries have since rebounded—but Sharif’s leadership of the coalition will serve as a much-needed corrective, enabling Pakistani military diplomacy to rebuild and bolster ties with Arab Gulf states and slow the pace of deepening strategic ties between India and the GCC.

Furthermore, Pakistan has done its part by conveying its red lines to Iran. If it backtracks, it will signal that Iran has a veto power over Pakistan’s national-security policymaking.

Pakistan has already made concessions to Iran with respect to the regional sectarian war. On top of rebuffing pressure from Abu Dhabi and Riyadh to join the Yemen war, Islamabad also backtracked from its initial diplomatic support for the Syrian rebels.

Also, Islamabad has never publicly commented on Iran’s recruitment of Pakistani Shias to fight in Syria. That Iran may now be sending Afghan Shia fighters from Syria to Yemen should be of concern to Pakistan, as it means that Pakistani Shias could soon follow. Iran’s use of Afghan and Pakistani Shia militants has grown from the initial pretext of “shrine protection” in Syria to support for the Bashar al-Assad government. Now, it has expanded beyond the Iraq-Syria theater to buttressing the Houthis. Iranian support for Pakistani Shia militants provides fodder for the Pakistani Taliban and the so-called Islamic State, which are bent on “cleansing” Pakistan of its Shia population. And it also presents a possible future threat to Pakistan, if and when these fighters return home, especially given Iran’s historic assistance to Shia militants inside Pakistan, including in the restive Kurram Agency.

Pakistani officials also allege that Iran has allowed its territory to be used by Indian intelligence for operations in Pakistan, and that Iran has even cultivated its own assets inside Pakistan’s criminal underworld and separatist groups. The Iranians too, in the not-so-distant past, have had their own concerns vis-à-vis Pakistan over groups like Jundullah and its successor organizations that operate in Iran but were based in Pakistan. These concerns appear to have subsided, and both countries have enhanced cooperation over border security.

The “relaunch” of IMAFT with Sharif at its helm would not negate the many areas of cooperation between Iran and Pakistan that have emerged in recent years. Iran and Pakistan now describe their respective emerging ports of Chabahar and Gwadar as “sister ports,” whereas they were once portrayed as rivals. The two countries will renew talks on a natural gas pipeline this spring. And Iran appears to have joined a Sino-Russo-Pak bloc supporting a political resolution to the war in Afghanistan.

Pakistani officials do not see the involvement of their current or retired military personnel in IMAFT as mutually exclusive with strong ties with Iran. They speak of an “alliance” with Iran as well as Turkey, anchored by China and Russia, on the future of Afghanistan and Central Asia. There is a convergence in how Pakistan and Iran view the pathway to peace and stability in Afghanistan—a clear contrast to the 1990s, when the two countries supported opposing sides in the Afghan civil war. And even Pakistani military officials are keen on integrating Iran into an economic corridor connecting to China. Pakistan is keen on serving as a gateway for Iranian trade with China, and it views Iran as a future physical corridor to trade with Turkey and Europe.

Sharif’s leadership of IMAFT would be a slight departure from Pakistan’s neutral position on the Iran-Saudi regional war. It would reflect a stronger embrace by Islamabad of a policy of dual engagement with Riyadh and Tehran. Iran will have to reconcile itself with this change rather than reflexively oppose it. If China is able to support the Iranian ballistic missile program and jointly manufacture armed drones with Saudi Arabia, and if India can fancy itself as a potential security guarantor for the GCC while continuing to have close military cooperation with Iran, then Iran has little reason to protest when Pakistan opts for having its cake and eating it too.

Arif Rafiq is president of Vizier Consulting, LLC, which provides strategic guidance on Middle East and South Asian political and security issues. He is also a fellow at the Center for Global Policy and a non-resident fellow at the Middle East Institute. He tweets at @arifcrafiq.