Can Petro Poroshenko Save Ukraine? 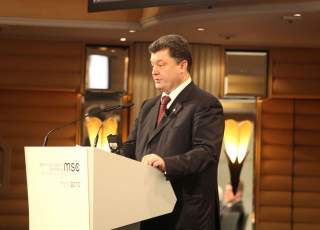 With most of the ballots counted, it seems that the “chocolate king” Petro Poroshenko has won the election to become Ukraine’s next President.  Moreover he has done so in a single round of voting, with a considerable margin of victory.  Unfortunately, he now faces the seemingly impossible task of actually governing the country.

Simply put, Ukraine is caught between a rock and a hard place.  The rock is the continuing pressure from Moscow, pro-Russian separatists in the Donbass, and the oligarchs who control the lion’s share of Ukraine’s national wealth, all seeking to preserve their prerogatives and privileges in the new order.  The hard place is the diametrically opposite demand of hardcore Maidan activists, self-appointed people’s militias, and the ordinary Ukrainians who have supported them, that the system must be torn down altogether and rebuilt on new foundations of national unity around Ukrainian identity, good governance, and European integration.

That the presidential election took place at all is of course better than the alternative.  More than three months after the violent overthrow of former president Viktor Yanukovych, Ukraine is badly in need of a new and legitimate government, and having conducted a basically free and fair election with a clear outcome serves that purpose to a degree.

Still, the constellation of the country’s sitting parliament and acting ministers is purely an outcome of last winter’s Euromaidan and ensuing violence.  Thus, without new parliamentary elections and the formation of a new government with a clear popular mandate, the legitimacy of the acting authorities will remain tenuous.

Ukrainians and the international community also expect that the current leadership will agree on some process for constitutional reform, which will address both the balance of powers between the central government and local authorities, and clarify relations between the Presidential Administration and the Cabinet of Ministers.

On paper, that seems like recipe for returning to normalcy.  But the reality is anything but normal.

Poroshenko’s victory is unlikely to bring change mainly because Ukraine has already changed on its own, denying the traditional political class—including Poroshenko and each of his main rivals—a stable footing on which to ply their trade.  In fact, the factions that divide Ukraine today don’t give a hoot for the promises of political candidates, or the outcome of the elections.

The situation of the so-called “people’s republics” led by pro-Russian separatists in parts of the southeastern Donbass is already well known, as is that of Russian-occupied Crimea.  Yet there is another, nominally pro-Ukrainian part of the population, which harbors almost equal contempt for the acting authorities in Kyiv.  Some are now serving in loosely constituted “national guard” and other paramilitary units that have gone to Donbass to fight the separatists.

The deepest division may not even be between those fighting on opposite sides in Donbass, but rather within Kyiv itself, between those who see themselves as guardians of an ongoing revolution, and those who are basically prepared to go back to business as usual.

This split is evident on the Maidan, where dirt-streaked activists continue to occupy their makeshift barricades and encampments round the clock, while self-appointed defense forces carry weapons, inspect passing traffic, and conduct drills.  Amid the semi-ordered chaos, among the makeshift memorials to fallen protestors and along the tent-lined streets, well-heeled locals and visitors go about their business as if nothing has changed, buying ice cream, snapping photos, and popping in and out of fashionable shops.  For the moment, the two sides seem almost to ignore one another.

This surreal coexistence of the Maidan’s harsh reality with normal life can hardly continue in Kyiv, just as the de facto state of civil war in the country’s southeast will hardly permit Ukraine’s new leaders, including Mr. Poroshenko, to return to politics as usual.

Maidan occupiers from every ideological stream and from every region of Ukraine present a unified front on one basic question: they have no intention of leaving their posts until they see what they call “concrete changes,” including a wholesale revision of the political system.  Among those proposing some semblance of a program, the details vary but the main principles are national unity, anti-corruption reform, transparency at all levels of government, and rejection of centralized power in favor of more direct democracy.

In speeches and platforms, Poroshenko and other mainstream politicians promise these very same things.  Some have even displayed admirable dexterity in balancing commitments to reconciliation with the Russian-speaking southeast and strengthening of a unified Ukrainian national identity.  Yet neither the Maidan activists nor the self-defense forces who will eventually return to Kyiv from the Donbass battlefields believe such promises.

The dominant figures—Poroshenko, Tymoshenko, and Yatseniuk—are seen as holdovers from the old regime, and are well known to have enjoyed personal wealth and privilege whether they were in or out of power.  The more marginal actors—especially nationalists like Oleh Tyahnibok, Dmytro Yarosh, and Oleh Lyashko—could be either coopted or bulldozed by Ukraine’s super-rich oligarchs, or take such a hardline position that they will alienate Americans, Europeans, and most Ukrainians as well.

It is hard to see how a future government in Kyiv composed of such figures can either win the trust and confidence of Maidan veterans, or come to terms with southeastern separatists, sympathizers and Russian interventionists who reject the legitimacy of the Ukrainian state per se—let alone do both.

So, welcome back to the corridors of power, Mr. Poroshenko, and good luck.  If you feel like the walls are closing in around you, it’s because they are.  And if there is a light at the end of this tunnel, it is only dim and far away.

Matthew Rojansky is the director of the Kennan Institute at the Wilson Center. Follow him on Twitter: @MatthewRojansky.