Can Putin and Erdogan Reconcile Their ‘Diametrically Opposed’ Interests at Their Upcoming Summit? 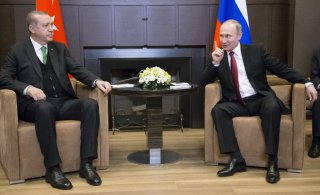 Turkish president Recep Tayyip Erdogan is due to meet with his Russian counterpart Vladimir Putin in the Black Sea resort city of Sochi on September 29. The two leaders are expected to discuss the recent uptick in military tensions across northwestern Syria. Russian forces have reportedly intensified their airstrikes against the rebel outpost of Idlib in September, stoking fears in Ankara of further destabilization on Turkey’s southern borders. "The regime in Syria poses a threat in the south of Turkey. So, as a friend to Russia, I expect from [Vladimir Putin] Putin and Russia a different approach as a requirement of solidarity," said Erdogan on Friday.

The Sochi summit will come on the heels of what Erdogan described as disappointing bilateral talks with U.S. president Joe Biden. “In the discussions with Mr. Biden that I’d been anticipating, there wasn’t the desired outcome... as two NATO countries, we need to be at a different point,” he said. Erdogan went on to criticize ongoing U.S. support for Kurdish militant groups in Syria, adding that he seeks to take Turkish-Russian relations “much further” at his upcoming meeting with Putin. The Turkish leader doubled down on Ankara’s controversial decision to purchase Russia’s S-400 “Triumf” missile defense system, confirming earlier reports that he intends to import a second S-400 regiment by the end of 2021.

The two sides are not expected to reach any sort of lasting, long-term settlement on the fate of Idlib. Russian and Turkish interests in the region are “diametrically opposed,” noted Russian political scientist Fyodor Lukyanov. “All the agreements that have been reached—about the withdrawal of militants [from northwestern Syria], that Turkey will relocate them somewhere else, because it has a large contingent there—they do not work,” he added. Despite the ongoing Russian-Turkish impasse over larger questions of Syrian statehood, the summit could still be a boon for ongoing deconfliction efforts aimed at mitigating the risk of military escalation between Turkish-backed militants and Russian-sponsored Syrian government forces.

But, for some in Moscow, the summit’s decidedly Middle-Eastern agenda has been colored by developments closer to home. Earlier this week, Turkey’s Foreign Ministry issued a statement partially refusing to recognize the outcome of Russia’s September Duma election: “Turkey maintains its support for Ukraine's territorial integrity and does not recognize the unlawful annexation of Crimea,” said Foreign Ministry spokesman Tanju Bilgic, noting that the State Duma elections in Crimea have “no legal validity for Turkey.” Erdogan personally underwrote his government’s position later that week, noting in his UN address that Turkey does not recognize Russia’s 2014 annexation of Crimea and reaffirming Ankara’s commitment to the “defense of Ukraine’s territorial integrity and sovereignty.”

Erdogan’s comments elicited swift and vigorous, if not predictable, rebuke from the Kremlin. “Turkey knows very well that Crimea is a sovereign part of the Russian Federation, and it knows very well that we never ignore such statements,” said foreign Russia’s Foreign Ministry spokeswoman Maria Zakharova. "We don’t accept such statements [about non-recognition of the elections in Crimea] and we openly say this to our Turkish colleagues," added Kremlin spokesman Dmitry Peskov. "The issue of Crimea is an issue on which our positions are dramatically different. We express regrets in connection with this stance, but we hope that political will will be shown over time and Turkey will change this position, simply acknowledging the truth and the real state of things," Peskov said.

The Kremlin and the ruling United Russia party have devoted much of their pre- and post-election messaging to highlighting the alleged dangers of foreign meddling in Russia’s electoral process. Russian pundits, commentators, and politicians harangued the EU over an earlier European Parliament report suggesting that Europe should refuse to acknowledge the outcome of the Duma elections if they are “recognized as fraudulent.” The EU settled for a milder course, formally refusing to recognize only those parts of the Duma elections that were held on occupied Ukrainian territory. Nevertheless, the consistently tough rhetoric of Kremlin officials has not been matched by concrete punitive measures against the West. In particular, there is no indication that the Kremlin is seriously considering leaving the Parliamentary Assembly of the Council of Europe (PACE)—a measure long advocated for by populist commentators and politicians in Russia.

A similar situation appears to be playing out with Turkey. Zakharova insisted that Moscow will draw the “appropriate conclusions” from Ankara’s comments, which “obviously do not benefit the bilateral relationship,” but it is not clear what this means in concrete terms. Erdogan’s statements did not prompt the Kremlin to go as far as canceling the September 29 summit, nor is there any indication that Putin so much as intends to bring up the issue of Crimea during the Sochi talks.  Russian political commentator Yevgeny Satanovsky noted that this scandal is unlikely to have any meaningful effect on the booming Russian-Turkish trade relationship, nor is it likely to jeopardize Ankara’s pending S-400 contract. Svetlana Zhurova, a member of the State Duma Committee on International Affairs, told Russian media that Turkey and Russia remain “strategic partners” despite their stark disagreement over the status of Crimea. “We have many points of contact. And there are places where we are not just strategic partners, but actively helping one another,” she said.

The fallout from Erdogan’s partial refusal to recognize Russia’s Duma election casts a renewed spotlight on the complex, at times oscillating, relationship between Moscow and Ankara. Kremlin officials are quick to deploy a well-rehearsed repertoire of outrage in response to perceived slights, but there is no real appetite in Moscow to potentially torpedo the fragile working relationship between the two countries over Turkey’s longstanding position on Crimea.