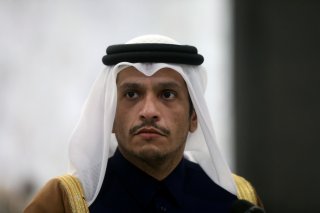 On a recent trip to Qatar, Lebanese president Michel Aoun met with Qatari emir Tamim bin Hamad Al Thani to discuss ways to assist Lebanon’s unprecedented economic crisis. Tamim publicly expressed solidarity as a reason to support Lebanon. It was an encouraging sign, but there may be another unspoken geopolitical justification. Given that Doha and Riyadh have been at loggerheads over influence in the Arab world, their convergence on Lebanon may be an extension of Gulf rivalries, regardless of previous reconciliation efforts between the two leaders at al-Ula, in Saudi Arabia.

The meeting between Aoun and Tamim was cordial. Aoun highlighted that Qatar offered assurances of support for Lebanon in many domains. The two leaders touched on areas such as infrastructure investments for electricity and reconstruction efforts regarding Beirut’s port following the August 2020 blast that killed two hundred people.

For his part, Tamim told Aoun that his country has always supported the Lebanese people and will continue to stand by them. He mentioned the deep historical relationship between the two countries, explaining that he is willing to offer Lebanon a hand of friendship during its difficult financial period. He also praised Lebanese expatriates living and working in Qatar. About 60,000 Lebanese are believed to be in the country.

While it is easy to assume that brotherly relations and solidarity are the drivers of the interaction between the two nations, geopolitical interests probably play a role as well. Saudi Arabia has historically been Lebanon’s financial backer in times of economic hardship. However, Riyadh and Beirut have reached an impasse in their diplomatic relations, with the former withdrawing its ambassador from Lebanon on October 29. The move followed a leaked video of Lebanon’s Information Minister George Kordahi’s statement about Riyadh’s war in Yemen against Iranian-backed Houthis rebels. The minister said the Houthis were “defending themselves” and argued the conflict was “futile.”

Kordahi’s comments were made before he was appointed to his current post as information minister. This made little difference to the Saudis, however, who viewed his opinions as “insulting.” Riyadh interpreted his criticism as a sign that Hezbollah, a Shiite Lebanese political party that supports the Houthis, has taken over Lebanon. As a result, the Saudis no longer see a reason to cooperate with the Lebanese government. Kordahi resigned from his position as minister of information on Friday, December 3, with the hope that Riyadh would reverse its decision.

Still, this alienation has pushed the nearly-bankrupt Mediterranean nation into Doha’s arms, which earlier this year promised to invest in Lebanon provided it forms a new government. A new government was formed in September 2021, but Lebanese still live in poverty. Lebanese citizens have taken to the streets yet again in nationwide protests, burning tires and blocking roads while demanding answers to their economic plight. Unfortunately, regardless of what the politicians decide to do, any strategy to reverse this recession will likely be a long process.

Indeed, there are clearly no quick fixes to Lebanon’s economic depression, which the World Bank says is “deliberate.” Officially, Lebanon’s currency is valued at 1,515 lira to $1. But the real black market value is 25,000 lira. The international community has conditioned financial aid on Lebanese politicians stepping forward with a concrete plan to stop systemic corruption—the source of most, and arguably all, of Lebanon’s problems.

The Qataris want the same commitments from Beirut—that Beirut will ensure tangible economic and political reforms prior to receiving life-saving investment. However, this will not stop Doha from sending aid to Lebanese families that are in dire need of support through a possible International Monetary Fund (IMF) arrangement with Lebanon. Lebanon is in the middle of negotiations with the IMF to unlock a $10 billion aid package to help revive its impoverished economy. The IMF has required Lebanese leaders to enact a series of political reforms to tackle corruption in the electricity and banking sectors before it can receive more aid. But the Lebanese people cannot wait for governments and international institutions to agree on a deal. They need assistance now.

In a signal of his intentions, Qatar’s emir said he will dispatch Foreign Minister Mohammed bin Abdul Rahman Al Thani to Beirut at an unspecified date to discuss all developments to assist Lebanon. Qatar is showing the Lebanese that hope is not lost despite long odds against their country.

This appears to be a moment for optimism. It could hardly come at a better time. Lebanon’s economy is in shambles, with some people digging through trash simply to find food to eat. This can be the start of Lebanon’s turnaround, but that can only happen when its leaders create permanent solutions through the practice of good governance and respect for the rule of law—not from robbing its people and then asking for a handout.