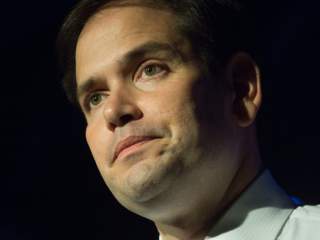 Donald Trump has beaten the Republican establishment in three straight state nominating contests. On Thursday night, the establishment struck back.

Ted Cruz and Marco Rubio formed an effective tag team against Trump, who did not have his best debate and seemed ill prepared for obvious lines of attack. Rubio drew the most blood, as he needed to as he has the most to lose on Super Tuesday.

Rubio not only exposed the degree to which Trump is out of his depth on public policy details, which is not necessarily surprising. He also tried to undermine the personal brand that has propelled Trump to the top of the polls.

The Florida senator blasted Trump as the recipient of inherited wealth rather than a self-made man, someone who would be “selling watches in Manhattan” if it weren’t for daddy’s money. He challenged the idea that Trump is a quality manager by bringing up the Trump University scandal. And potentially most damning, he went after Trump’s reputation as a protector of American workers against foreign competition by pointing to the billionaire’s alleged immigration violations.

All this combined with a list of Trump’s ideological deviations rattled the frontrunner more than we’ve seen him off kilter since an early exchange with Carly Fiorina, who has since departed the 2016 Republican presidential race.

Trump parried and got in some good counterpunches, calling Cruz a liar and Rubio a “choke artist.” But he never got into his groove belittling Rubio the way beating up on Jeb Bush helped him in down moments in previous debates.

Yet Rubio and Cruz waited until Trump had bonded emotionally with his supporters before really challenging his core appeal. Once established, those kinds of attachments are hard to break. It usually requires an explicit betrayal by the candidate himself rather than some good debate moments by opponents.

If few Trump voters are likely to be in play, the biggest question coming out of the debate is whether Rubio did enough to distance himself from Cruz as the main anti-Trump candidate. Rubio has been doing well with late-deciding voters. Can he consolidate Republicans who want to stop Trump?

An unspoken reason many Republicans prefer Rubio to Cruz in the anti-Trump sweepstakes is the belief that it will now take the combined strength of the conservative movement and the party establishment to defeat Trump at this point.

Cruz can’t get the establishment support necessary to pull off this coalition. John Kasich probably can’t win over enough conservatives and Ben Carson is no longer a major factor in the race, despite providing occasional comic relief in the debates. Only Rubio can unite the conservative and establishment wings of the party against the disaffected populists Trump has mobilized.

If Cruz remains well positioned in the Southern states voting Tuesday or did well enough against Trump to gain converts himself, then the debate did not change the basic contours of the race. Trump is now the favorite. The only question is whether Rubio or Cruz can beat Trump one-on-one or force a contested convention in Cleveland combined. If they can do neither of those things, Trump wins.

That said, several more debates like this could conceivably start to have some effect. Trump is going to need to figure out how to deal with Rubio. Talking about his sweating or the one time he imploded against Chris Christie won’t do the trick.

Trump took on the neocons in South Carolina and survived. In fact, he thrived. The front-runner was able to win a conservative, military friendly state as an opponent of the Iraq war. He could redouble his criticisms of Rubio on the Gang of Eight while pointing out that he is the most Bush-like of the remaining candidates on foreign policy. Cruz was able to point out the times Rubio and Hillary Clinton backed the same wars.

The danger for Trump is always that he will overreach. His history of opposing military interventions abroad is inconsistent, though better than most mainstream Republicans. If Trump had turned against Libya in 2012 and Iraq six months ago, that would be ahead of the curve for some GOP hawks.

Trump also tends to go beyond saying regime change in the Middle East is ill advised, destabilizing and likely to have unintended consequences that put America at greater risk of terrorist attacks to appearing to defend dictators themselves. In addition to being a bad way to make his foreign policy arguments, it also reinforces concerns that Trump has authoritarian tendencies himself.

But the neoconservative baton has passed from the Bush brothers to Rubio. Trump has moved the Overton window on foreign policy and immigration inside the Republican Party. He needs to shut that window on Rubio in the next debate, if the Super Tuesday results don’t do it for him.