Can Russia and America Work Together in Syria? 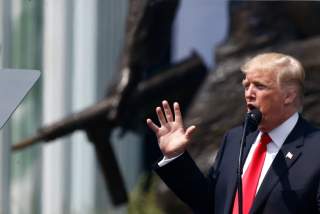 The United States is willing to work jointly with Russia to conduct stability operations in a post-ISIS Syria. Those stability measures could include jointly monitored no-fly zones and cease-fire observation missions. But exactly how such arrangements might be implemented are likely to be the subject of intense negotiations—and could be derailed by wayward proxies on the ground.

The United States and Russia have previously worked together during peacekeeping operations in the Balkans during the 1990s, but Moscow is not likely to be as willing to make the same kinds of concessions today that Boris Yeltsin’s government did when the Kremlin’s power was at a near historic low point. Today’s Russia under the leadership of Vladimir Putin is much more likely to demand an equal partnership in Syria than the severely weakened state that emerged in the aftermath of the Soviet Union’s collapse.

“The United States is prepared to explore the possibility of establishing with Russia joint mechanisms for ensuring stability, including no-fly zones, on the ground ceasefire observers, and coordinated delivery of humanitarian assistance,” Secretary of State Rex Tillerson said in a statement on July 5.

“If our two countries work together to establish stability on the ground, it will lay a foundation for progress on the settlement of Syria's political future.”

The Russians do not necessary oppose working with U.S. forces—or even having Russian troops under American command as they did in the Balkans—analysts said. However, Moscow is only likely to cooperate with Washington if the Kremlin’s interests are taken into account.

“I think that such operation under U.S. control is possible—but only if Russia finds the political arrangements acceptable,” Vasily Kashin, a senior fellow at the Center for Comprehensive European and International Studies at Moscow’s Higher School of Economics told The National Interest.

“If the Russian interests are served, it does not really matter who is formally in charge.”

Unlike during the 1990s when Russia was in shambles, the Kremlin is in a much stronger position these days.

“Of course, the current situation is different. In 1999 Russia made a lot of concessions—for example, during the negotiations on the Istanbul agreements,” Kashin said.

“Weakness on Kosovo at that time was just one reflection of wider weakness. So, of course, this time the interests of Russia and Russian allies will have to be secured and there will be genuine compromise.”

Maxim Suchkov, editor of Al-Monitor’s Russia coverage and foreign policy analyst at the Russia International Relations Council, told The National Interest that Tillerson’s proposal would probably be acceptable to the Kremlin—so long as Moscow is positioned to be seen as being on an equal footing with the United States.

“The set of the proposals Tillerson voiced contains both the potential necessary to help drive the Syria conflict to a final stage—which is a gradual settlement—and a message that is acceptable to the Russians,” Suchkov said.

“It is important for Moscow to have it on an equal basis, but also the Kremlin would be watchful to make sure the way the proposals are framed doesn’t put the U.S. in an upper position.”

While the Russians might be willing to work with the United States and vice-versa, the practical realities of implementing some sort of agreement to conduct joint operations could be very difficult.

“The Russians really, really, really want joint mechanisms in principle,” Olga Oliker, senior adviser and director of the Russia and Eurasia Program at the Center for Strategic and International Studies, told The National Interest.

“In practice, working out rules is a bear. It also doesn’t help that every time the U.S. does something that annoys Russia, the Russians shut down what Syria cooperation exists, because it’s the only thing they’ve got.”

Coordination between the United States and Russia will have to be a first step towards joint operations should an agreement eventually emerge.

“I think coordination is the necessary first step. If that can function effectively, and not get shut down every few weeks, for a while, you can start having conversations about joint action,” Oliker said.

“But I would imagine it would not be under anyone’s flag, but rather tightly coordinated efforts with each firmly in command of their own forces.”

Indeed, the Russian view of joint operations with the United States might mean that Moscow simply has its zone of control—similar to what the Kremlin had proposed at various stages during negotiations to set up peacekeeping forces in the Balkans.

“I think the Russians’ real vision is of zones of influence/control, and coordination between those,” Oliker said.

“That’s actually feasible, except for both sides’ limited control over their proxies.”

Matthew Rojansky, director of the Kennan Institute at the Woodrow Wilson Center, highlighted the same problem.

“I don’t think the Russians have a problem operating in coordination or even cooperation with U.S. forces, per se.  The devil is in the details in Syria, however, where Russia’s main operations are air support for the ground forces of the Assad regime and Iranian backed militias and special forces,” Rojansky told The National Interest.

“It is hard to imagine how the U.S.-led coalition could hold together, much less maintain partnership with its Syrian opposition allies, if it was perceived to be cooperating with the Assad regime. That suggests the only workable option may be a de facto separation between Assad/Iranian/Russian and US/coalition/opposition areas of operations, as is effectively the case already. The problem there is Assad’s apparent determination to press any advantage, to use chemical weapons and barrel bombs, and to take back ‘every inch’ of territory.  In other words, Assad may never respect such de facto lines of control, and Moscow may not be willing or able to constrain him.”

Ultimately, it will be the Assad regime and the various other proxy forces—both U.S. and Russian aligned—that will determine if the two great powers can work together.