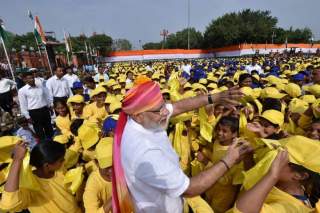 A few days ago, I read an article titled “Imagine a South Asia without borders” written by Annette Dixon, Vice President of the World Bank. I acknowledge that it is the job of international organizations like the World Bank to provide optimism to aid/loan recipient countries and regions, but the ones facing the realities of South Asia find it difficult to imagine a region without borders—something that had benefited their ancestors before 1947. Considering it my responsibility, I would like to highlight some recent events that fuel scepticism shadowing the South Asian Association for Regional Cooperation (SAARC—an international association composed of India, Pakistan, Afghanistan, Bangladesh, Bhutan, the Maldives, Nepal and Sri Lanka) and pessimism with reference to a meaningful regional cooperation in South Asia. Here, the focus is on the recent India-Pakistan tensions affecting SAARC.

Most recently, bilateral relations have hit a significant low point due to the resurgence of violence in Indian-administered Kashmir (IAK). It happened after the assassination of a freedom fighter, a twenty-two-year-old Burhan Wani, by the Indian army in IAK. According to a renowned Pakistani scholar, Pervez Hoodbhoy, “Wani was hunted down, and killed instead of captured”. More than two hundred thousand attended Wani’s funeral, and the Indian authorities mishandled the situation by the indiscriminate use of pellet guns against the civilian population. With this has emerged a wave of media paying attention to the movement in IAK. Now, the movement is both on the ground and in social media. The recent events have also reignited the blame game between Delhi and Islamabad with India blaming Pakistan for the situation in IAK and Pakistan blaming India for the troubles in Balochistan. There is a connection between Indian prime minister Narendra Modi’s remarks on Balochistan and the recent terrorist attacks for which the authorities in Pakistan had blamed Indian spy agency RAW.

Indian-Pakistani relations have been at a low since the start of the Modi government in India. It appears that the Indian PM is going by the script of his election speeches, where he had repeatedly stated that his government would be tougher on Pakistan. In the midst of the ongoing diplomatic crossfire, Modi decided to make his address on India’s seventieth independence day extra spicy through direct accusations against Pakistan for “atrocities” in Balochistan and Pakistan-administered Kashmir. As expected, Islamabad reacted strongly, and Advisor on Foreign Affairs Sartaj Aziz stated that, Modi only wanted to divert attention from tensions in IAK.

Usually at forums like SAARC, ‘face saving’ is an unwritten norm followed by all the participants. In accordance with this norm, member states try to not confront each other in public gatherings—a significant aspect of Asian culture. It also means dealing with contentious issues quietly, for example on the sidelines of formal meetings as has been a common practice at SAARC. However, this was not the case of the recent meeting of SAARC interior ministers in Islamabad. It could be because the meeting was held in the backdrop of heightened tensions between India and Pakistan. There are different versions of the story. For instance, Pakistani reports claim that Indian Home Minister Rajnath Singh left the meeting after “losing” arguments with his Pakistani counterpart Chaudhry Nisar Ali Khan. The issue was once again the Kashmir dispute. It is the typical case of one man’s terrorist is another man’s freedom fighter. At the meeting, Khan demanded a separation between legitimate freedom struggles and terrorism. In contrast, the Indian media reported Singh’s visit as ‘brief and tense” in which India’s strong stand against terrorism was presented in Islamabad. In his briefing to the Indian parliament, Singh, said “this neighbour [Pakistan] does not agree”. This shows New Delhi’s frustration with Pakistan, which unlike other SAARC members is challenging Indian hegemony.

Ministerial conferences are the backbone of multilateral forums—that is where the bulk of the work is done, especially towards a meeting of heads of state embodied in the SAARC Summit. So if ministerial meetings fail to produce the desired consent, one can expect very little from annual summits. The next summit is scheduled to be held in Islamabad in November 2016.

Following the recent drama at the SAARC meeting in Islamabad, Modi will be faced with two contrasting points of views in Delhi. First, is it worth attending the next SAARC summit in Islamabad where its minister claims that he was mistreated? Second, Modi should visit Islamabad for the scheduled summit (5–6 November) to ensure that the forum does not become hostage to India-Pakistan tensions. According to an Indian scholar, C Raja Mohan, “India should be patient with Pakistan, engage with other South Asian countries and not give up on the regional forum.” Nonetheless, Modi’s decision would require a careful consideration of the pros and cons of both decisions, but Pakistan would not be able to organize the summit in Modi’s absence. By refusing to send its finance minister Arun Jaitley for a ministerial meeting in Islamabad, India is already providing hints with regard to its participation in the scheduled SAARC summit in Islamabad. So, as has been the case in the past, the worst case scenario would of a postponement until relations between India and Pakistan normalize.

It is not the first time that animosity between India and Pakistan has come in the way of SAARC. At the 2014 SAARC summit held in Kathmandu, no agreement was reached on a regional rail network and a regional pact to trade electricity due to differences between India and Pakistan. Due to Pakistan’s opposition, New Delhi has opted for the option through subregional cooperation, which is permitted in the SAARC Charter. Nonetheless, the SAARC process has been constrained due to bilateral tensions between its members, mainly India and Pakistan. Due to this, the Association has been able to organize eighteen summit meetings in its existence of over thirty years—an event that is supposed to be an annual occurrence according to the SAARC Charter. For example, tension between India and Pakistan had escalated after a terrorist attack on the Indian parliament in December 2001; therefore, the eleventh SAARC summit was postponed and held after a gap of two years in April 2002.

While New Delhi has accepted Islamabad’s invitation on recommencement of a dialogue, both parties have contradictory positions on the scope of a dialogue. India and Pakistan are against stuck in technicalities, for instance, India wants a dialogue on cross-border terrorism because of its position declaring insurgency in Kashmir as terrorism supported by Pakistan. Pakistan wishes for an exclusive dialogue on the Kashmir dispute. On the positive side, both sides are interested in a dialogue but with different conditions. Contradictory positions on the initiation of the dialogue and differing conditionalities have often led to a dead end—a scenario all too familiar in the Indo-Pak context.

It is clear that the Kashmir dispute is central to tension between India and Pakistan. It is also because national narratives on both sides are built and promoted to demonstrate emotional attachment to Kashmir. In the case of the popular narrative in Pakistan, Kashmir is called the jugular vein “Shehrag” and in India Kashmir is declared integral part “atoot ang”. Often textbooks are used to promote ugly enemy image as part of the national perception building, which is responsible for the rise of nationalism on both sides. A recent case is that of an Indian actress possibly facing ‘sedition charges’ for saying that Pakistan is ‘not hell’—contradictory to the country’s defence minister, Manohar Parrikar, saying that “going to Pakistan is same as going to hell”.

It is time that India and Pakistan show responsibility as the leaders of South Asia by engaging in dialogue on all matters, including the Kashmir dispute. This dialogue would also send a positive signal globally that both countries acknowledge the rights of the people of Kashmir. It is clear that in the absence of a bilateral dialogue between India and Pakistan, the SAARC process has been victimized to settle scores against each other. A massive challenge to SAARC is in the form of nondiplomatic language contradicting its functionalist approach to regionalism.

So as a person who has been studying SAARC for well over a decade, I also agree with the aforementioned World Bank report on the projected and potential benefits of a border free South Asia—similar to the EU—but the bitter realities of India-Pakistan rivalry compels me to have a less optimistic mindset. Considering the regional dynamics, a realistic option for South Asian countries is to believe in the value of functionalism, which would mean avoiding controversial issues at this stage, for enhancing cooperation through SAARC.

Zahid Shahab Ahmed of Pakistan is a Postdoctoral Fellow at Deakin University, Australia. He is the author of Regionalism and Regional Security in South Asia: The Case of SAARC (Ashgate Publishing Limited, 2013).