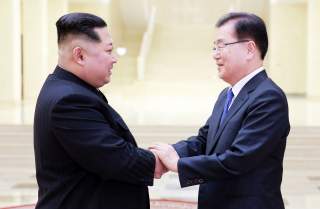 South Korea’s high-powered envoys sent to Pyongyang to prepare for a possible summit have apparently extracted from Kim Jong Un’s regime an idea that many on the outside assume is impossible: that North Korea might be willing to give up nuclear weapons altogether. Even if that is the case, the path to denuclearization with will be long and tortuous. The more immediate question is how to pursue both North-South and North Korean-U.S. diplomatic tracks after the Paralympics in Pyeongchang.

Olympic Games hosted by South Korea in 1988 and 2018 bookend the period when North Korea went from owning a plutonium research reactor and short-range missile program to potentially joining the handful of actors capable of fielding nuclear-armed intercontinental ballistic missiles (ICBMs). Kim Jong Un is feeling emboldened, declaring his determination to mass produce strategic weapons to threaten the United States, even as he sent his younger sister to the Winter Games to highlight his newfound desire for peace with South Korea. Reports out of Pyongyang suggesting Kim might be willing to relinquish nuclear weapons in exchange for new security guarantees, opens up new hope for negotiation.

Diplomacy remains in business, but it is it a fool’s errand?

Diplomacy is either too anemic an instrument of statecraft to solve the North Korean problem or the missing ingredient for capping a burgeoning nuclear danger and ending a longstanding cold war on the peninsula. If the American president believes the former and the South Korean president the latter, there is a risk that the beneficiary of diplomacy could be North Korea’s Kim, who wants to drive a stake deep into the heart of the U.S.-South Korean alliance.

On New Year’s Day, Kim surprised the world by announcing his desire for a détente with South Korea, a lifelong aspiration of his counterpart, President Moon Jae-in. The diplomatic pivot cost the 34-year-old Kim zilch and gained him several tactical benefits: shared ownership of a world-class Olympics, a makeover of the regime’s ruthless image, and a potential fissure between the United States and South Korea. In addition to trying to disrupt further sanctions enforcement, Kim bought time to demonstrate his ability to field a credible nuclear-armed arsenal. But experts diverge as to what he intends to do next: leverage his threat for gaining economic benefit, deploy a Pakistan-like nuclear force to coerce others to yield to Pyongyang’s demands, or something else?

When Seoul displays irrational exuberance about diplomacy’s merits, Washington fixates on its drawbacks. Moon is urging President Donald Trump to show flexibility in talking with North Korea, while Trump—who still has no ambassador in South Korea and whose special envoy for North Korea just abruptly stepped aside—is pressing his ally to remain steadfast behind a policy of maximum pressure. North Korea’s acceptance of denuclearization is the U.S. price of formal negotiations. According to Secretary of State Rex Tillerson, not “carrots” but “large sticks” will alter Kim’s behavior.

The world awaits the verdict as to whether the Olympic spirit will give way to a sustained truce or, much more likely, a resumption of military maneuvers and rocket launches. How much is Moon willing to risk for a mere meeting, albeit a milestone as only the third North-South summit in history? Would he unilaterally cancel joint military exercises without receiving anything in return? How much is Trump willing to jeopardize America’s standing in Asia by shunning negotiations while returning the region to a trajectory that could end in nuclear conflagration? This question is even more trenchant in the aftermath of Kim’s apparent flexibility as reported by the South Korean negotiating team returning from Pyongyang.

Even during the most parlous days of the cold war, diplomacy made its mark. Western diplomacy buttressed containment, and U.S.-Soviet summitry created breaks on nuclear arms and accidental war. And as the Trump administration’s national security and defense strategies make clear, America’s new priority is dealing with the reemergence of great power competition.

The Utility of Diplomacy

Diplomacy is all about persuasion short of war. So, laboring under constraints, in pursuit of higher ambitions, the United States should view the diplomatic instrument of power as a natural friend, not a foe, of strategic statecraft. Even the autocratic Kim appreciated the utility of a diplomatic overture, as Pyongyang has sought to play a weak hand against much stronger, more prosperous, elected governments.

Diplomacy, like the use of force, is neither inherently wise nor foolish. It is a tool. Its value depends on how it is used and toward what end. Much-maligned diplomacy must remain an indispensable part of a comprehensive strategy for at least muddling through, preserving the long post-1953 Armistice, and preventing a relapse of the Korean war, even if diplomacy cannot fully deliver the peace.

Diplomacy has many dimensions and can improve on any policy, even power politics. China’s support for sanctions and pressure has exceeded the expectations of most analysts, and this is in no small measure due to effective diplomacy. Trump has insisted on putting North Korea at the apex of America’s agenda with China, and Xi Jinping has responded. Beijing will no doubt avoid steps that destabilize a critical buffer state, but diplomacy has mobilized international support to constrict the flow of hard currency into North Korea.

The utility of diplomacy also can be found in its flexibility. Among diplomacy’s forgotten virtues is that it can help gain intelligence, especially when dealing with an opaque system whose leader never leaves the country. No senior member of the Trump administration has ever met Kim. Direct links between the two inner circles amount to two photo opportunities at Pyeongchang. Diplomacy that enables senior-level military talks could also reap information vital to preventing unintended escalation.

Given South Korea’s yearn to explore inter-Korean dialogue, agile U.S. diplomacy could help to prevent a rupture in a strong alliance. In inter-Korean talks, Moon would be prudent to eschew unilateral concessions that will only look like a sign of weakness to the Kim regime. A general interest in denuclearization sounds attractive, but it is easier to espouse than to realize. Likewise, Trump would be savvy to find a bit more diplomatic dexterity than shown thus far, by keeping the door open for talks while not letting up on a policy of pressure and full sanction enforcement. Symbolism can be met with symbolism, and substance with substance.

A Freeze for What?

Proponents of diplomacy contend a first step might be to offer North Korea something in exchange for a moratorium on weapons tests. But critics fear such lassitude would allow Pyongyang to unravel sanctions while assembling warheads.

For those who argue that Kim would risk his survival if he were to disavow nuclear weapons, there is a diplomatic remedy. Strategic ambiguity would suggest a drawn-out, action-for-action process. Faced with growing pressure, and yet equipped with a demonstrated nuclear capability, Kim could reaffirm a general desire to fulfill past promises while pursuing new goals such as a peace regime to replace the Armistice. This type of formula could convert Olympic contacts to into post-Olympic negotiations.

Thus, another virtue of diplomacy is that it can seek the sweet spot of overlapping interests in an otherwise adversarial relationship. For instance, while coercive diplomacy fails most of the time, it has a better chance of succeeding when chasing minimalist demands and offering incentives, not just penalties. Compellence for preserving the status quo is less problematic than pressure to evict a country from, say, occupying a neighbor’s territory it has already invaded or removing ICBMs once deployed.

Washington is right to reject the Chinese call for a dual suspension by which the U.S.-South Korean alliance would suspend legal, self-defense exercises in exchange for a North Korean pause of unlawful nuclear and missile tests. However, this does not mean the allies should avoid providing incentives to more meaningful talks, even if not classifying such prenegotiations as a formal diplomatic process. Reports that Kim may be willing to reaffirm eventual denuclearization could accelerate the creation of more formal negotiations with the United States. But even if there is backtracking out of Pyongyang, the space has been created to advance further diplomacy.

For instance, if North Korea offers only a vague and unverifiable pledge of a freeze, then the United States could ante up a similar symbolic step—such as holding back on strategic bomber flights, an issue that Pyongyang finds particularly provocative. Should North Korea resume its testing, bombers could swiftly deploy from Guam.

Finally, diplomacy can project a narrative, from lofty ideals such as unification and future regional order to practical roadmaps. It’s time the United States empowered its diplomats to pursue the national interest, working side by side with those in uniform and across the interagency, even if that means preserving deterrence and containment while walking back foreign threats.

While diplomacy may not be able to solve the North Korea problem anytime soon, it can bring us tangible gains. We need to lower our sites but not jettison one of our most useful tools.