Can the A-10 Warthog Defeat Its Toughest Enemy? 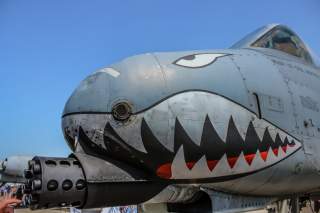 The United States Air Force is fighting insurgencies in Afghanistan, Iraq, Libya and Syria—but in recent years, the Air Force has had to contend with two uprisings much closer to home in Washington, DC. One was the storm of criticism it received over the controversial and expensive F-35 Lightning stealth fighter—but the trillion-dollar project falls under the definition of “too big to fail,” at least contractually speaking.

The other revolt concerned the fate of the A-10 Thunderbolt II ground attack plane, nicknamed the Warthog for its svelte good looks. In this case, Congressional activism succeeded in thwarting the A-10’s retirement, at least for now. Despite some gnashing of teeth by the top brass—accusations of “treason” were leveled at Warthog proponents at one point—a fleet of fewer than three hundred A-10s will remain in service at least until 2022—some possibly up until 2028. It is currently being deployed operationally in the campaign against ISIS.

The debate around the Thunderbolt is instructive because it reveals divergent philosophies and priorities within the U.S. military. While some of the political tactics in the A-10 debate may be controversial, both sides have rationales for their positions, which are worth judging on their own merits.

The Warthog can be described in four words, but I’ll add in a few hundred more because I’m generous that way.

Slow, because it flies well below the speed of sound—typically 350 miles per hour, and not much over 400—in order to give the pilot time to spot targets on the ground and line up attack runs.

Tough, because the A-10 has 1,200 pounds of titanium armor—unlike the Air Force’s fighter planes—and is designed to withstand hits from light antiaircraft cannons. An A-10 once returned to base in this condition after being hit by a missile.

Heavily armed, because in addition to carrying sixteen thousand pounds of bombs, rockets and missiles on eleven hardpoints, the A-10 is the only aircraft armed with the massive GAU-8 Avenger thirty-millimeter Gatling-style autocannon, with over a thousand shells each “the size of a milk bottle.” (That is, if your milk bottles are as slender as soda bottles.)

When it was first deployed in 1977, the A-10 was basically intended to be used as a flying sledgehammer against Soviet tank divisions. It wasn’t expected to survive very long performing this mission: even flying low to avoid long-range radar-guided SAMs, Air Force planners anticipated that, in the event of a Soviet invasion, they would lose their entire fleet of A-10s in just a few weeks of intense combat. Fortunately, such a scenario never materialized. Instead, the A-10 first won its fame destroying thousands of vehicles in the Gulf War.

Rarely has an aircraft so ugly been so passionately beloved, both by troops on the ground and in popular culture. So why does the Air Force leadership want to retire its Hogs? And why do its supporters so strenuously object?

I’ll try to roll out some of the arguments made by both sides. Please keep in mind that the counterarguments are not intended to be intrinsically more correct than the arguments.

Argument: The A-10 isn’t survivable in a high-threat environment.

This is basically issue number one: the slow, unstealthy A-10 is vulnerable to a full range of air defense systems developed by Russia and China that have only become more sophisticated with each passing year. Even against a lesser but heavily armed foe—think Iran or North Korea—the Warthog could suffer heavy losses unless air defenses were first suppressed. An A-10’s armor may provide protection against low-caliber flak and give it a fighting chance at surviving a hit from a smaller missile, but it will not offer much protection from the full array of tactical and theater Surface to Air Missile (SAM) systems.

Exhibit A in this argument is the A-10 in the Gulf War: four Warthogs were lost to SAMs (an SA-9, two SA-13s and a shoulder-fired SA-16), and three returned to base too damaged to fly again. These losses were inflicted by Cold War–era SAM systems operated by poorly trained crews.

A fast, high-flying fighter can fly above the effective range of antiaircraft guns, Man Portable Air Defense Systems (MANPADS), or short range systems such as the SA-9. Stealth aircraft, like the F-22 and F-35, may also be able to operate in the vicinity of longer-range air defense systems without being targetable.

So, the argument goes, in the most vital scenario of national defense—a high-intensity conflict against an opponent with modern air-defense systems—the A-10 has little chance of surviving.

Counterargument: Almost all of the wars the United States has fought recently were in low-threat environments.

Iraq, Bosnia, Kosovo, Afghanistan, Iraq again, Libya, Syria. The list of wars the A-10 has been employed in is basically all of the wars that the United States has fought since 1991. And continued engagement against lower-tier foes seems more likely than a devastating clash against peer military powers.

The conflicts over Iraq and the former Yugoslavia were also hardly zero-threat environments. For example, three F-16s and two F-15s were also shot down by SAMs in the Gulf War. Meanwhile, despite suffering losses, the A-10 accounted for nine hundred tanks, out of the 1,700 claimed by aircraft of all types in the campaign.

Only a single A-10 was lost in combat over a decade later, in the invasion of Iraq in 2003, and none since. For over a dozen years, Hogs have so far survived their occasional encounters with missiles and antiaircraft guns. Army attack helicopters, also providing close support to ground forces in the same threat environment, have suffered heavier losses.

From this perspective, the fixation on preparing to fight high-tech opponents is a case of the Air Force preferring to plan for hypothetical wars in the future rather than for the ones in which it is engaged in the present.

Argument: The A-10 is a more effective close air-support platform than its proposed replacements.

The U.S. military found in Vietnam that jet fighters had difficulty identifying ground targets and lining up attacks runs because they were simply too fast, and performed poorly at low speeds. One of the more efficient close air support platforms in that war was the tubby A-1 Skyraider, a propeller plane that looked like it came out of World War II. It is no coincidence that today the air forces of Iraq and Nigeria, amongst others, are interested in the A-29 Tucano, a slow-flying propeller planes capable of carrying modern weapons for use in a counterinsurgency role.

The A-10, like the Skyraider, can fly slower and closer to the ground so as to effectively observe the situation and more precisely target its attacks. This added situational awareness can make a big difference for troops on the ground: an A-10 pilot may be able spot enemies that friendlies below don’t see, and better verify that he isn’t hitting friendly troops by accident. Furthermore, the A-10 can loiter overhead for hours while supporting friendly troops, longer than most fighters can under typical conditions.

The Thunderbolt’s thirty-millimeter cannon has no equivalent on other U.S. airplanes. It is ideal for chewing up armored vehicles (including tanks hit on the top or rear armor, but especially infantry fighting vehicles and other light armor) and allows the A-10 to attack targets much closer to enemy troops than is possible with a guided bomb. Not only is it far more lethal than the twenty-millimeter cannons on American fighters, but it carries six times more rounds than the F-35, and over twice as many as the F-16 and F-22. The F-35 stealth fighters are also limited to only four ammunition hardpoints if they are deployed using their stealth capabilities—that is, without externally stowed weapons.

Additionally, Warthogs are “short takeoff and landing” aircraft that can operate from rough landing strips closer to the front line, with engines designed to withstand loose debris from unprepared runways.

Of course, flying low and slow exposes the A-10 to fire from weapons such as heavy machine guns and ZSU-23 antiaircraft guns. But the A-10’s armor and design gives it a better chance of surviving hits by antiaircraft weapons compared to other U.S. warplanes.

Precision-guided missile and bomb strikes are used in the majority of air support missions today. Targets can be identified and painted by a Forward Air Controller on the ground, so that the pilot can safely fly high and fast to avoid enemy antiaircraft fire.

Even in the Gulf War, A-10s probably destroyed far more tanks using Maverick missiles than with cannons. But all kind of planes can be equipped to fire Mavericks and other precision-guided munitions: not just fast F-35s and F-16s, but also AC-130W gunships and B-52 bombers. The Air Force (controversially) records 80 percent of Close Air Support missions since 2006 as having been performed by aircraft other than the A-10.

The A-10’s cannon, while impressive, does not justify maintaining the plane by itself. The AC-130 gunship can operate with long loiter times in low-threat environments if necessary.