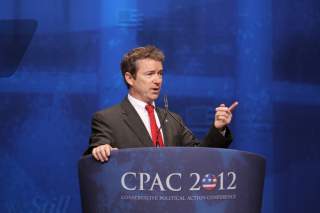 For the past several years, Rand Paul has been an uncommonly interesting political figure, injecting some fizz into the Republican Party. The notion of a debate—any debate—over foreign policy in a political party that has stubbornly adhered to the dogmas of the George W. Bush administration offers the prospect of something new and exciting, especially for a media corps that battens on controversy, and often seeks to make some up where none exists. To his credit, Senator Paul has in fact taken political stands that, more or less, have contravened the regnant orthodoxies of the GOP when it comes to federal surveillance or the battle against terrorism.

Though it was Paul’s stand against surveillance that captured most attention, turning him into something of a celebrity on the libertarian right and left, he also gave a speech at the Heritage Foundation in February 2013 that continues to merit attention. It bore the rather grand title “Restoring the Founders’ Vision of Foreign Policy.” But Paul made some substantial points in that speech, pointing to the wisdom of George F. Kennan as his lodestar. At the same time, Paul sought to make the case that he is not a crude, old-fashioned isolationist—someone who believes in a Fortress America. He contended, “I see the world as it is. I am a realist, not a neoconservative, nor an isolationist. When candidate John McCain argued in 2007 that we should remain in Iraq for 100 years, I blanched and wondered what the unintended consequences of prolonged occupation would be. But McCain’s call for a hundred year occupation does capture some truth: that the West is in for a long, irregular confrontation not with terrorism, which is simply a tactic, but with Radical Islam.”

When Paul made these remarks, the GOP appeared to be in some ferment on the issue of intervention abroad. The Iraq War had gone south. Afghanistan was an unpopular war. Obama was in retrenchment mode. Since then, however, the Republican Party has begun to revert to the Bush credo of a triumphalist foreign policy. The rise of ISIS, coupled with Russian irredentism, has put a good deal of wind into the sails of those who argue that it is time for America to go on the offense again.

As the New York Times’ Jonathan Martin observes today, this turn of events seems to have discombobulated the nascent Paul efforts to earn the 2016 Republican presidential nomination. Paul was always a long-shot to win in a party that, more often than not, has deferred to the perceived establishment candidate—this year’s is Jeb Bush, a contender who, as Sam Tanenhaus points out in the new issue of TNI, comes from a family dynasty that has, over the decades, precisely honed its ability to steer the Republican ship—but he appears to be making some tactical moves that do not augur well.

The most perplexing such move was Paul’s apparent outreach to the neocon outlet, the Washington Free Beacon, which has repeatedly embarrassed him with reported stories about his staffing choices. The Times reports:

Mr. Paul and his backers have been conflicted about how to respond to the shift, and to the senator’s hawkish critics. They have courted them at times; Mr. Paul has aggressively sought out Republican Jewish Coalition donors and dropped by one of their events at a Washington steakhouse this year that Mr. Adelson attended. His team has even sought to flatter the neoconservative Washington Free Beacon, offering the site exclusives about Mr. Paul’s bill to eliminate American aid to the Palestinians (which the Free Beacon noted promptly came hours before he was to meet with Jewish donors).

If correct, this sounds opportunistic and ill-conceived on Paul’s part. It suggests opportunism rather than conviction. Nor is this all. There’s also the problem that the neocon opposition to Paul is not rooted in a lack of outreach on his part. It can’t be altered with tidbits about bills he’s proposing. It’s based on a sincere and fervent opposition to his foreign policy stands. Finally, cozying up to his detractors is no way to attract the kind of serious foreign policy thinkers that Paul would need to mount a serious campaign even as Jeb Bush seems intent on nailing down anyone of consequence.

As the primary season heats up, Paul’s rivals will increasingly seek to use him as a foil to buttress their own positions. If he continues on his current course, Paul could torpedo his chances of promoting a debate about foreign affairs in the primary season before the contest has truly begun.

Jacob Heilbrunn is the Editor of The National Interest. You can find him on Twitter: @JacobHeilbrunn.