Can the Philippines' Duterte Stay Friendly with America? 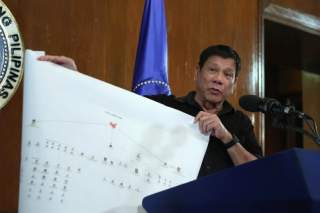 “I’m really a rude person. I’m enjoying my last time as a rude person,” the Philippines’ newly-minted president Rodrigo Duterte promised shortly after winning a bitterly contested elections. “When I become president, when I take my oath of office . . . there will be a metamorphosis.” His Kafkaesque promise, which raised hopes of a transformed rhetoric from the foul-mouthed leader, would soon be put to test.

Duterte relished a global diplomatic debut like none of his predecessors. It was his moment to shine. Barely three months into office, he was slated to attend the Association of Southeast Asian Nations (ASEAN) summit in Vientiane, Laos to formally accept the regional grouping’s chairmanship, which rotates on an alphabetical basis. (Rather comically, some of Duterte’s staunch supporters falsely claimed that their leader was “elected” to the position because of his sheer popularity and will to power.)

On the sidelines of the summit, which was also attended by global leaders from America, China, Japan, Russia, India and the United Nations, the Duterte administration scheduled nine bilateral meetings. Without a question, the most anticipated one was with no less than U.S. president Barack Obama, who was on his ninth and final trip to Asia.

Just weeks earlier, Duterte ruffled some feathers in Washington when he uttered unflattering remarks about the outgoing U.S. ambassador, Philip Goldberg. And amid Duterte’s “shock and awe” campaign against drugs, liberal hawks within the Washington also began to agitate for more explicit criticism of his human-rights record. Tensions were beginning to build in bilateral relations, but the Obama administration constantly emphasized the alliance’s durable amicability.

To be fair, the latest dust-up between Duterte and Obama is unlikely to undermine the sound fundamentals of bilateral relations. The Philippine leader has made it clear that he won’t scuttle existing bilateral agreement with America, particularly the Enhanced Defense Cooperation Agreement (EDCA), which is yet to be ratified by the Philippine Senate. Nonetheless, there are growing signs that the century-old alliance is heading into a “new normal,” wherein bilateral ties are strong but no longer as special and sacrosanct as before. Meanwhile, Duterte is planning his much-anticipated state visit to Beijing, a remarkable departure from his predecessors, most of whom, almost by tradition, chose Washington as their first diplomatic destination.

When Obama was asked about his upcoming meeting with Duterte, he made it crystal clear that human-rights issues would be front and center. This may have ticked off his Filipino counterpart, who couldn’t help himself from uttering expletives when he was, shortly before attending the summit, asked about his scheduled meeting with the American leader. For the fiercely independent-minded Duterte, America was interfering in his country’s domestic affairs. Shortly after, the bilateral meeting was called off, when Obama questioned whether there could be any “productive” exchange with the controversial leader. Soon, presidential candidates Hillary Clinton and Donald Trump chimed in, turning a diplomatic incident into a domestic political issue.

The American president was just recovering from another embarrassing incident in China, where he was denied a red-carpet stairway upon his arrival, while watching American reporters manhandled by Chinese security officials on the tarmac. In fairness, the Philippine government, worried about a potential diplomatic meltdown, immediately released a statement of clarification, expressing the Philippine president’s sincere “regret” about his remarks. Duterte also clarified that he wasn’t directly insulting the American leader. The Obama administration, in turn, clarified that bilateral relations are still “rock solid” and there is no point for concern.

Obama himself reassured everyone that he didn’t take the insults personally, and is well aware of Duterte’s unorthodox habits and manner of speaking. So everyone began to heave a sigh of relief. But just when everyone thought that the dust was settled, the Philippine president (once again) went off-script and embarked on an anticolonial tirade before global leaders attending the East Asia Summit, with Obama in the audience. Duterte reminded everyone about America’s historical crimes against Filipino people, dating back to colonial days. He even showed a picture to prove his point. This was unprecedented, triggering an awkward silence among the audience. Duterte also skipped the ASEAN-U.S. summit, and reportedly there was no shaking of hands with Obama upon the conclusion of the global gathering.

Upon his subsequent visit to Jakarta, Indonesia, Duterte continued to push the envelope, criticizing America and its lack of commitment to the Philippines, while praising Chinese assistance to the Philippines. Some began to wonder whether there would be irreversible consequences for the two countries’ bilateral relations, among the oldest and most intimate in history. Though immensely popular at home, the Duterte administration couldn’t shield itself from domestic criticism too. With Obama stepping down from office in coming months, and given the sheer breadth of complementarity in their strategic interests, the two allies are in a great position to restore good will and avoid any downward spiral in diplomatic ties.

Interestingly, Duterte’s meeting with fellow Asian leaders went extremely well. Japanese Prime Minister Shinzo Abe, eager on maintaining a recently blossoming relationship with Manila, went so far as to tell Duterte, “Mr. President is quite a famous figure also in Japan, and I’m very excited to see you in person.” Aside from Abe’s fan-mode reception, Duterte cordially hobnobbed with fellow ASEAN leaders, including the charismatic Indonesian president Joko Widodo, who accompanied him throughout.

While many ASEAN leaders were scandalized by Duterte’s diplomatic tiff with Obama, and the strange hiccup in Philippine-American relations, they nonetheless welcomed his surprisingly dovish position on the South China Sea. Duterte made it clear that unlike his predecessor, Benigno Aquino, he is not going to push ASEAN towards a collision course with China. If anything, he won’t even raise the Hague arbitration case, which was expected to be a huge blow to China. Since much of Asia is filled with autocratic regimes and faux democracies, hardly anyone raised concerns over human rights and civil liberties under Duterte. In short, hardly anything divided them.

Duterte, who will next year oversee ASEAN as its chairman, was much closer to the regional strategic consensus than his predecessor. The contrast in Duterte’s diplomatic chemistry with fellow Asian countries, on one hand, and America and the United Nations, on the other, was too palpable to ignore. The message was clear: the new government in the Philippines isn’t in any mood for criticisms from the West, particularly on the human-rights front, and is ready to engage its neighbors on practical solutions to practical security and economic problems.

Thus, Duterte signaled his independence as an Asian leader. And as the Philippines’ new caudillo, he is indisputably in charge of the country’s policy apparatus. This was perhaps also designed to reassure China that his policy in the South China Sea is not influenced by any external power, thus simplifying the matrix of strategic calculations in bilateral negotiations. Nevertheless, reports suggesting China’s plans of constructing dual-purpose facilities on the bitterly contested Scarborough Shoal put into question whether the two neighbors can ever find a mutually satisfactory modus vivendi in the South China Sea.

Many Filipinos are impatiently and suspiciously watching China’s moves in the area. If negotiations fail to bear dividends within a year or so, it is highly likely that Duterte will double down on relations with America under a new leadership, preferably under Hillary Clinton. For now, however, it is clear that Duterte wants to break off from what some perceive as decades of strategic subservience vis-à-vis America, which is now struggling to build a regional coalition to rein in Chinese assertiveness. It’s hard to escape the impression that Beijing is once again in the regional driving seat.