Can the U.S. and Russia Avoid an Arctic Arms Race? 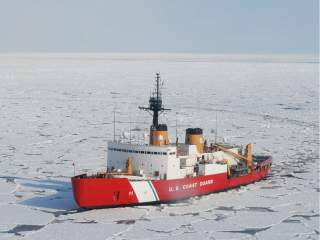 The Arctic is currently experiencing major systemic changes as a result of climate change, which could produce greater international cooperation—or competition, and possibly conflict—among the states concerned. Both the United States and Russia have strong interests in keeping the Arctic an area of peaceful cooperation and the institutions and mechanisms exist to support that outcome. The key question is whether current geopolitical tensions will permit that to happen.

The end of the Cold War led to a period of Arctic scientific and environmental cooperation largely conducted under the Arctic Council, a consensus-based body made up of eight Arctic states that include the United States and Russia, as well as permanent participants (representing indigenous peoples) and observer states. The region has been conflict-free, with states committed to diplomacy to resolve differences and abiding by the provisions of the United Nations Convention on Law of the Sea (UNCLOS).

Today, some argue that period has passed, as national interests begin to clash over boundaries, rich Arctic oil and gas resources, and fisheries. The most serious complication, however, comes from outside the region, with the tense geopolitical environment that has followed Russia’s annexation of Crimea and support of separatism in eastern Ukraine. The West has responded with economic sanctions including steps that directly affect the Arctic, namely prohibitions on assisting Russian oil and gas development.

There has also been an increase in military activity in the Arctic, as both Russia and the United States have held large-scale maneuvers. President Obama’s call last fall for the construction of a new U.S. icebreaker to supplement its two Polar-class icebreakers, and to build additional Arctic-capable commercial vessels, was a signal that the United States sees new urgency to act in defense of its interests in the Arctic.

The size and scale of Russia’s military activities in the Arctic are producing negative perceptions and growing suspicion in the West. Western authorities are monitoring Russia’s deployment of new weapons and air-defense systems, restoration of Soviet-era installations, development of new bases, and stationing of new ground forces to determine if there are offensive intentions.

The Russian side argues that this buildup is defensive in nature, and that the numbers of armed forces added are small. They posit these activities are prudent, given the importance of the North to Russia’s future economic development plans, the increasing permeability of Russia’s vast northern borders and the anticipated increase in commercial shipping along Russia’s north as Arctic sea ice melts. China, a new observer state in the Arctic Council, has made clear its strong interest in Arctic resources and shipping routes. Russian and Chinese foreign policies overlap on several issues, but Russia must be concerned by the prospect of increased Chinese shipping along Russian borders and presence in the Arctic.

Still, the situation in the Arctic itself is not threatening, and the United States and Russia are working together in the Arctic Council. The latter is evolving into more of a policymaking body, as binding agreements have been reached under its auspices on search and rescue at sea and dealing with oil spills; a third, on scientific cooperation, is under negotiation.

There are no serious landgrabs going on, as Russia and the other Arctic Ocean coastal states are playing by the rules of the game in submitting claims for extended territorial shelf beyond the two-hundred-mile exclusive economic zones (EEZ) afforded them by UNCLOS. Indeed, the United States has failed to ratify that treaty, which prevents it from submitting a formal claim. The Arctic is rich in oil and gas, with some 10 percent of the world’s undiscovered resources of oil and 30 percent of its gas. Almost all the known reserves, however, are located onshore or within a coastal state’s EEZ, so there is no dispute over ownership. The steep decline in world oil prices and the current glut of natural gas have also slowed energy projects in the Arctic, as companies seek cheaper and more hospitable climes.

Despite the melting ice, Arctic sea routes will not soon replace the Panama Canal. Most of the Arctic Ocean is still uncharted, and the seas will remain precarious due to floating ice and poor weather conditions even in summer. Container shipping, which depends on very strict schedules, will be deterred by these conditions.

These factors suggest a less alarmist view of the Arctic, but it will take political will and agile diplomacy to keep it that way. Russia and the United States can ill afford the resource drain of a military arms race in the Arctic—nor is it in either country’s interest to see military activities undermine the capacity for essential joint action in the Arctic.

What is needed now is for Russia to increase its transparency about its military activities in the North and allay the suspicions that threaten cooperation. U.S. economic sanctions on Russia will remain in place until Russia fulfills the Minsk II peace accords for Ukraine. But, high-level U.S.-Russian military contacts about the Arctic should be resumed. The two countries’ coast guards are already cooperating on search and rescue in the Arctic. Restoring military contacts over the Arctic would not connote acceptance of Russia’s aggression in Ukraine, nor is it a sign of weakness to discuss cooperation in charting the Arctic Ocean, researching ice conditions and protecting more permeable borders. The United States also needs to ratify UNCLOS.

Arctic issues and climate change are beyond the scientific understanding and management capacity of any single country. The United States, as the Arctic Council Chair for one more year, welcomes constructive Russian activity. Though only time will tell, the Arctic remains a pathway for cooperation despite the major downturn in relations.

Kenneth Yalowitz is Director of the Conflict Resolution Program at Georgetown University and a Global Fellow at the Woodrow Wilson Center, and was U.S. Ambassador to Belarus and Georgia. Vincent Gallucci is Professor, University of Washington, Jackson School of International Studies and School of Aquatic and Fisheries Sciences.