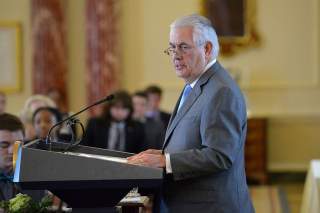 Secretary of State Rex Tillerson’s visit to Northeast Asia this week comes as tensions are running high in the region. North Korea recently conducted a simultaneous test of four ballistic missiles that could be used to attack South Korea and Japan, as well as U.S. forces stationed in those countries with nuclear weapons. The impending American deployment of an anti-ballistic missile system in South Korea to defend against a missile attack has provoked China’s strong opposition. South Korean president Park Geun-hye has just been removed from office for corruption, and a presidential election that could bring the opposition party to power will be held in May. While all this is happening, the Trump administration is doing some serious soul-searching about how to deal with North Korea. In short, Secretary Tillerson will face a diplomatic landscape that is littered with landmines on his first big troubleshooting mission overseas.

North Korea is at the center of this tangled web. Its relentless development of weapons of mass destruction despite international condemnation poses a growing security threat to the United States, South Korea and Japan. This development also threatens to widen the rift between America and its allies and China, the North’s protector. And the challenge of figuring out how to deal with Pyongyang could spark tensions between the Trump administration, if it wants to intensify pressure, and a new South Korean government, which is likely to favor a policy of engaging North Korea.

Devising a realistic strategy to defuse tensions requires understanding, however difficult, the motivations behind Pyongyang’s recent behavior. For the first nine months of 2016, North Korea topped its previous all time highs for WMD tests in one year—two nuclear and twenty-five missile tests. That was followed by a four-month hiatus foreshadowed in private meetings between North Korean government officials and former U.S. government officials last fall. Recognizing that a transition in Washington was about to take place, the North Koreans signaled they would take a “wait and see” attitude towards a new administration. The surprising election of Donald Trump probably reinforced that approach. His perplexing, often contradictory campaign statements—one moment expressing a willingness to hold a “hamburger summit” with Kim Jong-un and the next advocating that China rub him out—probably caused some head-scratching in Pyongyang.

Exactly why North Korea decided to take a short break from its provocative WMD testing remains unclear. Skeptics argue that it was not planning any tests anyway. Or the North’s posture may reflect a view in Pyongyang that, given the change in U.S. administrations, it was worth testing the waters to see if dialogue would be possible. North Korea’s motivation for talking to the United States may be to gain acceptance as a nuclear-weapons state. But its reasons may be more complicated, including a concern that an unending program to build nuclear weapons would eventually seriously hamper fulfilling Pyongyang’s second most important dream: modernizing its economy. And the North’s reading of the tea leaves in Seoul, with the growing prospect of a new South Korean government likely to change emphasis from pressure to engagement, may have reinforced a conclusion that Pyongyang should avoid tests or other provocations that could strengthen the conservatives’ election hand.

However, this period of watchful waiting may soon be coming to an end. While Pyongyang has been closely monitoring the United States in the intervening months and probably detects few if any signs that Washington is going to switch policy gears, the key may be the conduct of large-scale U.S.–South Korean joint exercises currently underway. Long regarded as reflecting a U.S. commitment to invading North Korea and toppling the Kim regime, the North Koreans’ main concerns, hinted at last fall, are drills to decapitate their regime—kill its leaders before the nuclear button can be pressed—and threatening flights of nuclear-capable bombers over the peninsula. Pyongyang has publicly demanded the exercises be canceled, but North Korean leaders are realistic and understand that is not in the cards. They have hinted that an alternative that might help avoid a serious escalation of tensions would be to avoid publicity about decapitation drills and to not schedule overflights.

The jury is still out on whether Pyongyang has reached its tipping point. Besides some press leaks, there has been little publicity about decapitation, and it is unclear whether the overflights will take place. The recent North Korean missile tests may have been just an immediate one-off reaction to the ongoing joint U.S.–South Korean military exercises. And Pyongyang may still want to exercise caution, with the South Korean election now scheduled soon. Or the tests could reflect a decision that a “wait and see” posture is unlikely to produce results, ushering in a period of bigger and better nuclear weapons and missile tests, possibly including an intercontinental ballistic missile able to reach the United States. If that’s the case, the crisis on the peninsula is only likely to intensify.

The diplomatic hat trick the Trump administration needs to pull off is finding a solution that can stop the growth of the North Korean threat, rebuild cooperation with Beijing and gain support from U.S. allies, particularly a new South Korean government. That’s a very tall order, especially since the overwhelming temptation in Washington will be to double down on sanctions, including measures against Chinese banks and businesses that have ties with North Korea, and to ratchet up rhetoric about military options for eliminating Pyongyang’s WMD threat. If that’s all Secretary Tillerson brings to Asia, his mission will fail. He will only create more running room for Pyongyang to move forward with its nuclear and missile programs by making cooperation between Washington and Beijing even more difficult to achieve.

The smart move would be to defuse tensions while laying the groundwork for a strategy that combines threats with leaving the door open a crack for renewed dialogue with North Korea. The first two stops on his trip—Tokyo and Seoul—will provide him with an opportunity to pledge Washington’s firm commitment to their security. But the real centerpiece of Secretary Tillerson’s trip will be Beijing. China’s public proposal last week that the United States suspend its joint military exercises—a key demand by North Korea—in return for Pyongyang suspending its nuclear and missile tests—a move that would serve Washington’s interests—signals that it is willing to play an active, even positive role in avoiding a “head-on collision,” in the words of Chinese foreign minister Wang Yi. While the Trump administration quickly rejected the proposal, rather than just leaving the matter there, Secretary Tillerson should pick up the diplomatic gauntlet.

Caution, always the watchword when dealing with North Korea, should be reflected in the secretary’s counterproposal. Rather than dive headlong into new negotiations, step one should be “talks about talks”: unconditional preliminary discussions to see if North Korea is willing to put its nuclear weapons program on the table. “Unconditional” is the key word. While the United States has insisted in the past that North Korea agree ahead of time to focus on giving up its nuclear weapons, Pyongyang’s view is that talks should be held without preconditions. There seems to be little if no downside in adopting that approach, since the North Koreans understand that their program will be Washington’s number one topic for discussion. Step two in this process will be a decision by President Trump and Kim Jong-un, based on the results of these preliminary talks, whether formal negotiations should resume. If North Korea proves willing to address Washington’s WMD concerns, formal negotiations can start. If North Korea is not serious, the United States should then move on to putting greater diplomatic pressure on China, enacting new sanctions, and taking further measures to protect Seoul and Tokyo.

Whether the Trump administration adopts this approach or just presses the policy default button—more sanctions and military measures—is the $64,000 question. Consequential secretaries of state solve the thorniest and most important national security problems through patient, skillful diplomacy and negotiations. Fair or not, Secretary Tillerson has been pilloried by the press and pundits as missing in action. This sensitive diplomatic mission offers him an opportunity to show his mettle. The last thing Washington needs, at a time when America’s global leadership and position in Asia is under challenge, is for Secretary Tillerson to leave the region empty-handed, or in worse shape than he found it.

Joel S. Wit is a Senior Fellow at the US-Korea Institute, Johns Hopkins School of Advanced International Studies and founder of the 38North website. Richard Sokolsky recently retired after 37 years in the Department of State.  From 2005-2015 he was a member of the Secretary of State’s Office of Policy Planning.  He is currently a non-resident senior fellow at the Carnegie Endowment for International Peace.