Can Trump Find an Israel-Palestine Solution? 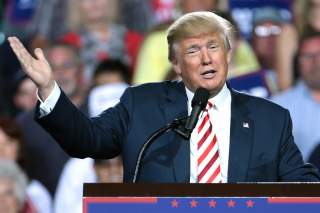 When two right-wing Israeli prime ministers assumed power in Jerusalem just a few months after left-of-center American politicians entered the White House, it meant that the presidential stars had failed to align for them.

Talk about bad timing. Menachem Begin, the founder of the Likud Party and a proponent of a vision of “Greater Israel,” was elected to head the first right-wing government in Israeli history on June 1977, six months after Americans elected Democrat Jimmy Carter, a president who rejected the realpolitik policies of his Republican predecessors. Carter was also committed to a liberal internationalist agenda, to improving relations with the Soviet Union and to friendship with third-world nations.

Begin had hoped that Washington would welcome treating Israel as an ally as part of its Cold War strategy. Instead, he was forced to contend with a U.S. president who rejected the notion that Israel had an historical right to maintain control over the West Bank (or Judea and Samaria) and Gaza, and believed that Israel should not be allowed to continue building Jewish settlements there, a view that was also shared by previous U.S. administrations.

Carter pressed ahead with an activist American policy aimed at working with Moscow on reaching an Arab-Israeli peace agreement, which would involve Israeli withdrawal from the occupied Arab territories in exchange for peace. And like his United Nations ambassador, Andrew Young, he seemed to perceive the Palestinians as oppressed third-world people who should have the right to self-determination.

Yet the never-ending tensions between Carter and Begin didn’t trigger a major diplomatic crisis in the Israeli-American relationship. In response to the Soviet invasion of Afghanistan and the Islamist revolution in Iran in 1979, President Carter, as part of an effort to preserve U.S. interests in the Middle East, focused on negotiating a peace agreement between Israel and Egypt, which forced him to come to terms with Begin. The Soviets weren’t invited to participate in the talks and the Palestinian issue was relegated to the bottom of the agenda.

Fast-forward another thirty years, and once again trouble was in the air for Benjamin Netanyahu, another Likud leader who was elected to head a nationalist Israeli government in March 2009. Netanyahu became prime minister two months after Barack Obama, a young Democrat, was elected as president. Obama called for de-prioritizing the global war on terrorism, for accommodating the Arab and Muslim worlds, and for gradually disengaging from the Middle East.

Netanyahu had hoped that John McCain would be welcoming him at the White House. McCain was backed by an entourage of Republican politicians and conservative pundits who befriended “Bibi” when he had served as a diplomat in Washington during the height of the Reagan era. Netanyahu clearly wasn’t ready for the young African American and former community organizer whose liberal and globalist worldview conflicted on so many levels with his. Netanyahu was an older and conservative Israeli politician, an unabashed Zionist, a skeptic when it came to the credibility of the international community and a former captain in an elite commando unit.

Netanyahu was eager to market Israel as a leading strategic partner of the United States in the fight against radical Islamic terrorism. Israel could participate in a campaign to deny the ayatollahs in Iran a nuclear bomb and perhaps quietly move the Israeli-Palestinian peace process to the bottom of the Washington agenda.

But he and Obama, who refused to even use the term “radical Islam,” seemed to have different priorities when it came to restarting the peace process, placing a freeze on building new Jewish settlements in the West Bank, welcoming the election of a Muslim Brotherhood government in Egypt and taking the diplomatic route to end Iran’s nuclear program.

Hence, Netanyahu aggressively campaigned against Obama’s nuclear deal with Iran when he addressed a joint session of Congress in 2015. He also made it clear that he had wanted Republican Mitt Romney to win the 2012 presidential election. It seemed as though Bibi had transformed into a Republican politician, one who represented Israel on Capitol Hill.

But while Netanyahu had to deal for eight years with his nemesis in the White House in 1980, Begin and Likud supporters in Israel and in the United States breathed a sigh of relief when Carter, whom many of them branded as an enemy of Israel, lost the presidential election to Republican Ronald Reagan.

In fact, Begin saw the election of the ultraconservative Republican and former California governor, with his many Jewish pals in the film industry of Hollywood and political ties to pro-Israeli Evangelical Christian forces, remove as a fulfillment of right-wing Israeli dreams. Meanwhile, Reagan himself was celebrated as though he was a honorary member of the Likud Party.

Indeed, there was no doubt that Reagan and his top foreign policy advisors, who viewed the international system through the dark Cold War lenses, perceived the Palestine Liberation Organization as a radical left-wing terrorist group and Soviet pawn. Israel, on the other hand, was regarded as a “strategic asset” of the United States in the Middle East—a notion that would become an integral part of the neoconservative national-security guidebook.

That meant the Palestinian problem could be swept into the bottom drawer while the military relationship could gradually become a strategic alliance à la NATO. It was unsurprising that champagne corks were popping open at AIPAC offices in Washington, while so-called Arabists in the State Department looked as though they were preparing for a funeral.

But there was one small problem. An American strategy aimed at containing Soviet expansionism in the Middle East and reigning in the ayatollahs in Tehran required extending diplomatic and military ties with leading Arab and Muslim states, such as Pakistan and the pro-American Arab states, which at one point included Saddam Hussein’s Iraq.

As part of that strategy, the Reagan administration announced a few months after entering office the sale of five Airborne Warning and Control System Surveillance planes to Saudi Arabia, its chief Arab ally in the region. That was to date the largest foreign arms sale in U.S. history.

In response, Israel and its supporters on Capitol Hill launched a massive lobbying campaign against the deal, which resulted in major tensions between Washington and Jerusalem. Some Reagan administration officials began insisting that U.S. lawmakers choose whether they were loyal to their president or to a foreign leader. Are you with Reagan or with Begin?

The tensions between the two countries didn’t stop there. In 1981, Reagan supported a UN Security Council Resolution that condemned Israel after the country bombed an Iraqi nuclear reactor. He also suspended delivery of the F-16 fighter jets that Israel had purchased.

Also, after Israel annexed the Golan Heights in 1981, Reagan announced that he was suspending strategic cooperation agreement between the United States and Israel, which prompted Begin to accuse Reagan of treating Israel like a “Banana Republic.”

And ironically, the Israeli invasion of Lebanon in 1982, a step taken by the Begin government after receiving a “yellow light” from Washington to attack bases of the pro-Soviet PLO in that country, was responsible for what happened next: the Americans pulled out the bottom drawer, took out the Palestinian problem and started a reassessment of the relationship with Israel. The United States forced out pro-Israeli secretary of state Alexander Haig, enhanced the power of pro-Saudi secretary of defense Casper Weinberger and eventually opened secret talks with the PLO during the last days of the Reagan administration.

No one would contend that Reagan turned to be an anti-Israeli president. It’s just that interests ended up overriding personal sentiments (assuming that Reagan, who had never visited Israel, was a great friend of the Jewish state) and made it impossible to pursue a Middle Eastern strategy that placed Israel—the U.S. deputy in the region—at the center.

From that perspective, there is a sense of déjà vu when one senses the level of excitement among members of the Likud-led government and their supporters in Washington these days.

Those supporters seem to expect that the departure of Obama, along with his dreams of rapprochement with the Muslim world and the creation of a Palestinian state, and the election of New York real-estate magnate Donald Trump, who has three Jewish grandkids, is a sign that the new administration will pursue policies that would be aligned to the interests of Israel. After all, Trump ran for the White House pledging to bar Muslims from entering the United States and to use the term “radical Islam.”

Indeed, even if one disregards the way his family ties would or wouldn’t affect his relationship with Israel, Trump could be described as the anti-Obama when it comes to Bibi. The two men share a conservative and nationalist worldview and a dismissive attitude towards liberal political elites and the international community.

Moreover, much has changed in the international system and in the Middle East since the Reagan days. The fall in energy prices has helped reduce Saudi influence in Washington. Also, the Saudis now seem to share a common cause with the Israelis in dealing with Iran.

At the same time, continued chaos in the Arab world has helped marginalize the Palestinian issue and has placed less pressure on Washington to do something to revive the Israeli-Palestinian peace process.

The conventional wisdom is that Trump and some of his aides, who perceive the Palestinians as part of the radical Islamist terrorist bloc, would treat the building of new Jewish settlements with benign neglect and place more emphasis on strengthening strategic ties with Israel. After all, Trump has reiterated his commitment to relocate the U.S. embassy in Israel from Tel Aviv to Jerusalem and has nominated a pro-settlement Jewish activist as his ambassador to Israel.

But again, personal sentiments and fiery rhetoric don’t necessarily make for a coherent policy. To fight ISIS and contain Iran, Washington would still need to rely on the support and cooperation of leading Arab and Muslim states. Israel’s ability to play a major role in U.S. strategy in the Middle East will depend to a large extent on progress on the Israeli-Palestinian front, while an explosion of new Israeli-Palestinian violence will play into the hands of Iran and radical Sunni Arab groups and place constraints on pursuing U.S. interests in the region.

Trump’s defense secretary, retired U.S. Marine Gen. James Mattis, who was in charge of U.S. forces in the Middle East when he was chief of U.S. Central Command, made that argument during a 2013 speech at the Aspen Security Forum in Colorado. He said America needed to work “with a sense of urgency” to achieve a two-state solution to the Israeli-Palestinian conflict, because resentment of U.S. support for Israel had hurt America militarily throughout the region.

“I paid a military-security price every day as the commander of CENTCOM because the Americans were seen as biased in support of Israel,” Mattis insisted, warning that the “current situation” was unsustainable. He called on Washington to act “with a sense of urgency” toward finding a two-state solution because the chances were “starting to ebb because of the settlements and where they’re at.”

It’s likely that the new Pentagon chief’s advice to his boss in the White House will reflect those concerns. He will probably call for maintaining the current U.S. policy of supporting a two-state solution along the 1967 cease-fire lines and oppose changes in the status quo in the West Bank in the form of new Jewish settlements. New Israeli-Palestinian violence may force Trump to take that advice seriously.

Or not. President Trump may choose to follow the example of another president, Harry Truman, who decided to support the creation of a Jewish state in 1947 and to recognize Israel in 1948, despite strong opposition from his secretary of state and the legendary Gen. George Marshall, whom Trump has compared to Mattis.