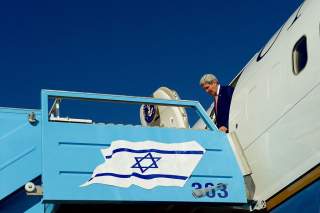 At a moment when Russia, Turkey and Iran are carving up Syria, when the U.S.-orchestrated battle for Mosul seems stuck in neutral, and when America's two leading Arab allies, Egypt and Saudi Arabia, are fighting their own debilitating cold war, how should one interpret the Obama administration's decision to spend its closing days in office focused on carving a legacy of critiquing Israel under the umbrella of proclaiming to safeguard a two-state solution to the conflict with the Palestinians? A few observations:

— President Obama has been remarkably consistent in his view that Israeli settlement expansion is the principal obstacle to progress toward Israeli-Palestinian peace. This view animated the president's decision to disregard his predecessor's constructively nuanced understanding with Israel on the issue as well as his ill-conceived demand for a total freeze on Israeli construction over the 1967 lines, including in Jerusalem. Both played a major role in producing impasse in peace diplomacy. Indeed, for all his protestations, President Obama is the first chief executive since President Johnson to register neither achievement nor even progress toward Arab-Israeli peace on his watch. That the Obama administration ends where it began, with a near-obsessive focus on Israeli settlement construction as the key to unlock the Middle East peace process, suggests that it learned virtually nothing from its experience of the last eight years.

— Putting the settlements clash in a broader perspective, the Obama administration's record toward Israel underscores a counterintuitive reality: it is possible for the two countries to have close military and intelligence ties as well as tense, raw and fractured strategic and political relations at the same time. From the opening days of the Obama White House, gone was the Washington-Jerusalem intimacy that characterized both the Bill Clinton and George W. Bush administrations – four-eyes meetings between leaders that were true meetings-of-the-mind, the sharing of speeches before delivery, the informal and discreet exchange of ideas, etc. While Israel's leadership certainly reciprocated – think of Prime Minister Netanyahu's controversial speech to Congress – it was the Obama team that came to power intent on changing the human dynamics of US-Israel ties, making it a more “normal,” less “special” relationship. Beyond the stillborn call for a settlement freeze, this “normalization” extended to such truly strategic decisions as Washington's refusal to share with Israel information about the secret Iran nuclear negotiations. The administration correctly points to the new ten-year memorandum of understanding on military aid as the clearest sign of its commitment to Israel's security and well-being, but it is important to note that an agreement for security assistance that Congress was likely to fund anyway came at a cost to Israel — an unprecedented demand from the White House that Israel refuse and return any additional monies a new Congress might choose to allocate for Israel's defense needs as well as the phase-out of Israel's long-held privilege of offshore procurement. Having a progressive president endorse a decade of security assistance may have its political advantages for Israel but add it up and the generous package of U.S. military aid, substantial as it is, is less generous than it appears.

— Though not obviously apparent, one cannot divorce the Obama administration's closing critique of Israel from aspects of its broader regional strategy: a disengagement from the "swamp" of Middle East problems, a rebalancing between Iran and its longtime Sunni foes (and in this case, Iran's Jewish foe), and a de facto welcoming of Russia as a major player in the regional Great Game. While there are strong ideological reasons for the Obama administration to trim the political sails of the Netanyahu government, the distancing from Israel also has the effect of weakening the U.S.-led “team” of pro-Western states, thereby advancing the three-pronged strategic narrative outlined above. What has gone largely unremarked is that this strategy has resulted in the fact that the United States and its allies are today in the weakest regional position since at least the 1979 Iranian revolution and perhaps since the 1956 Suez crisis, which makes it either a spectacular failure or spectacular success, depending on one's goal, but spectacular nonetheless.

Thankfully, with spine, wisdom and leadership, none of this is irreparable. U.S.-Israel relations can be righted by a new administration determined to restore intimacy and common purpose to the partnership. Washington can even advance Israeli-Palestinian peace if the White House is willing to think beyond the failed, top-down principles enunciated with great passion, if not great brevity, by Secretary of State Kerry. Instead, there is real potential for progress if the new administration pursues creative ideas of bottom-up diplomacy, persistent state-building efforts, Palestinian institutional reform and realistic understandings with Israel on settlement construction that differentiate between areas almost universally understood to remain inside Israel under any future agreement and agreed limitations on building elsewhere.

But none of this can truly succeed unless the Trump administration decides to make a broader re-commitment of U.S. leadership to the Middle East, shoring up allies beleaguered by America's disappearing act; reconciling antagonisms between and among our friends (e.g. Egypt v. Saudi Arabia) that festered without our steady hand on the rudder and had the effect of weakening our collective security; countering the windfall security and political gains enjoyed by Iran and its local proxies that Washington seemed to provide as a gratuity for the nuclear agreement; and helping to shape the post-Aleppo/(hopefully) post-Mosul strategic map of the northern Middle East.

While the Trump administration may come to office eager to reverse the negative spiral of U.S.-Israel relations, the real damage to that relationship emanates from something deeper than a woeful Security Council resolution, an ill-conceived obsession with settlements or a personal grudge against this or that Israeli politician. Rather, the real damage to Israel’s security comes from something deeper — the reluctance of Israel’s superpower patron to act like one. And unless the new president is willing to invest in a wholly new strategy of American leadership, no amount of feel-good, cigar-chomping, back-slapping intimacy between president and prime minister can repair the damage to vital security interests Israel has suffered in recent years as a result of the diminished role and influence of the Jewish state's great power ally.

Robert Satloff is executive director of The Washington Institute for Near East Policy.