Can Trump Shake Up the South Caucasus? 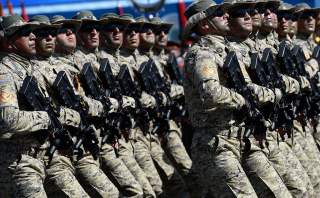 The South Caucasus states followed the U.S. presidential election carefully, due to their expectations of the next leader occupying the White House. Since the collapse of Soviet Union in 1991, the existence of powerful Armenian lobby groups, Georgia’s endeavors to become a Western ally and Azerbaijan’s energy resources, as well as the role of trade and energy transit between East and West, have all attracted U.S. attention to the region. The South Caucasus is one of the world’s most tumultuous regions, because of three spots of conflict (Nagorno-Karabakh, Abkhazia and South Ossetia). In the light of geopolitical transformations in the region, U.S. involvement there is of high importance for local states with expectations that the United States will support their independence and sovereignty.

In 2016, all three South Caucasus states marked their twenty-fifth anniversary as independent actors in the international community. In the ensuing twenty-five years, various issues have had direct or indirect effect on the United States’ South Caucasus policy. The foreign-policy priorities of U.S. administrations, the region’s geostrategic importance for U.S. interests, the United States’ relations with neighboring Iran and Russia, the enlargement of NATO, the Nagorno-Karabakh conflict between Armenia and Azerbaijan, and the closed border between Turkey and Armenia (closed in 1993 due to the Nagorno-Karabakh conflict) all have enormous impact on the United States’ bilateral relations with regional states and its foreign policy towards the South Caucasus.

According to U.S. officials, three major issues affect U.S. policy toward South Caucasus states: democracy and human rights, energy, and security. However, the prioritization of these issues changed according the priorities of various administrations over the last twenty-five years. Under the Bill Clinton administration, energy was at the top of the United States’ South Caucasus policy, because transporting the Caspian basin’s energy resources to Western markets was a priority. Under George W. Bush’s presidency, security was on the top of the United States’ foreign-policy agenda, because of the September 11 terror attacks and wars in Afghanistan and Iraq. Under Barack Obama’s presidency, the United States followed a rather liberal-interventionist foreign policy in the region. However, the place of these three issues was different in the respective cases of Azerbaijan, Armenia and Georgia. The United States’ engagement in the region during the Clinton and Bush administrations was more active than in Barack Obama’s presidency.

During his first term, Bill Clinton followed a policy of containing Iran and putting “Russia First” in the region. The architect of this policy was Strobe Talbott, who believed that Russia would change first, followed by the post-Soviet states. That policy was successful until 1996, but after then, the United States changed its policy. Bill Clinton’s administration actively endorsed regional energy projects in order to integrate regional states into the Western community and to strengthen their independence and sovereignty. Since 1994, all the states have been part of NATO’s “Partnership for Peace” program, and actively supporting NATO’s military operations in Afghanistan.

Under George W. Bush, the U.S.-Russian rivalry in the region increased due to “color revolutions” in Ukraine and Georgia, which were the most eager states to become members of the EU and NATO. Russia, by contrast, has strongly opposed the enlargement of NATO toward the post-Soviet region, because of security reasons. Georgia has opted for Euro-Atlantic integration and becoming a member of NATO and the EU. During the NATO summit in Bucharest in 2008, the United States and Poland called for granting a Membership Action Plan (MAP) to Georgia; however, the proposal met opposition from several countries, led by Germany and France. These countries opposed Georgia’s membership in NATO because of the situation facing the country’s breakaway territories. As a result, today Georgia has been left without the MAP. Meanwhile, newly elected Donald Trump is also against NATO enlargement.

During the George W. Bush era, confrontation between the United States and Iran had negative effects across the region. The Bush administration tried to deploy military bases in the South Caucasus against Iran, but regional states—even Georgia—refused to host them. Under Obama’s presidency, Iran signed the nuclear deal with the P5+1 states, and Western countries removed certain sanctions against Iran. The new situation had a positive impact for regional security and for bilateral relations between Iran and the South Caucasus states. Meanwhile, Donald Trump has referred to deal as a “disaster” and vowed to “dismantle” the deal. This would probably have a negative effect on regional relations and may lead to new crises in the region.

Under the Obama administration, the U.S. “reset” had a tremendous impact on the United States’ South Caucasus policy, as it was interpreted as “leaving the South Caucasus.” But during Obama’s second term, the reset policy changed, and the Ukrainian and Syrian crises negatively affected U.S.-Russian relations. As a result, the geopolitical transformation of the South Caucasus started with Armenia refusing to sign an Association Agreement with EU in 2013, instead becoming a member of the Russian-led Eurasian Economic Union as of 2015. Azerbaijan became a member of the Non-Alignment Movement in 2011, which meant the country opted against joining any military bloc, maintaining its balanced and independent foreign policy amidst the region’s geopolitical rivalries.

U.S. restraint in the region had a negative impact on the Nagorno-Karabakh conflict as well. The United States is also one of the three cochairs of the Minsk Group, which is dealing with the Nagorno-Karabakh conflict between Armenia and Azerbaijan. The parties of to conflict expect the United States to be more active in the process of conflict resolution. The United States had an active role there during the Clinton and Bush administration, but inactive policy toward the region under the Obama presidency led to worsening circumstances—as seen by the occurrence of the so-called “April War” in the region.

Azerbaijan expects Minsk Group cochairs to be more active in this process. The government was not happy with Obama-appointed cochair James Warlick’s statements on the Nagorno-Karabakh conflict. Therefore, official Baku’s expectations under the Trump presidency are for more active and fair engagement by the United States in the conflict.

Under Bush’s second term and Obama’s presidency, Azerbaijan faced more liberal internationalist foreign policy from the United States, hurting bilateral relations. In contrast, Trump is supposedly against liberal interventionism; respecting Azerbaijan’s sovereignty will have a positive impact on bilateral relations. Another expectation of Azerbaijan’s from the Trump presidency is increasing U.S. support for the Southern Gas Corridor, which is important for EU energy security as well.

Generally, Armenian governments have two main expectations from U.S. presidents: recognition of the Armenian genocide and facilitating opening the border between Turkey and Armenia. But still, any U.S. president could meet these expectations. Despite the two different protocols signed between Turkey and Armenia in 2009 in Zurich to establish diplomatic relations and open the border, the process failed. Meanwhile, the Obama administration made a miscalculation about Azerbaijan’s reaction to Turkish-Armenian rapprochement.

Unlike Barack Obama, during the electoral campaign Donald Trump did not comment on the Armenian genocide, which caused concern for American Armenians. The Armenian government and members of the Armenian diaspora expected support from Trump administration for recognition of the Armenian genocide and the opening of the Turkish-Armenian border. American Armenians also worried about Trump’s business relations with Turkey and Azerbaijan. Trump, it should be noted, has not commented on energy issues or the Nagorno-Karabakh conflict either.

Trump’s intended policies toward the South Caucasus, Middle East, eastern Europe and Central Asia remain uncertain. The fear, though, is that Trump’s team might further decrease U.S. involvement in the region, leading to a regional imbalance.

Dr. Cavid Veliyev is a researcher at the Center for Strategic Studies, Baku.