Can Trump's Pick for Secretary of State Pass the "Togo Test"? 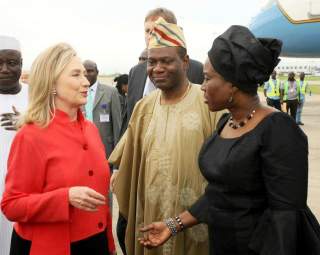 After a wide-ranging selection process, President-elect Donald Trump will reportedly name his secretary of state in the next week or so. As soon as America’s top diplomat is revealed, pundits will undoubtedly pillage through his past, looking for clues that may augur the country’s foreign policy future. There is, however, an even simpler way to determine how the likely sixty-ninth secretary of state will set his agenda: Does he plan to visit Togo or not?

It is an odd question, but one which the sixty-seventh secretary of state answered easily. In January 2012, Secretary Hillary Clinton did visit Togo, the nation of seven million wedged between Ghana and Benin in West Africa. In the capital, Lomé, she toured the modernist, multimillion-dollar, Chinese-built presidential palace with President Faure Gnassingbé. As Clinton pointed out later, “No secretary of state had ever been to Togo before.” In fact, no secretary of state has ever been to as many countries as Clinton, before or since. Her successor, John Kerry, is at the moment a full twenty-one stops short of her total 112.

To reach that record, Clinton had to visit a number of places usually skipped by U.S. secretaries of state. Between 2009 and 2013, her travels took her to the Cook Islands and Timor Leste, to Angola and Cote d'Ivoire, to Uzbekistan and Mongolia, and to Papua New Guinea and Uruguay. She visited Cape Verde a couple of times. Of course, the relevance of these countries to America’s immediate national interest is somewhere between nearly and entirely nonexistent. Nonetheless, there was intention behind this wild itinerary.

Clinton’s jetting to every corner of the world complemented her open-ended foreign policy strategy. In this strategy, marquee headings such as “Pivot to Asia” and “Reset with Russia” became catch-alls for an assortment of small-bore achievements and slow-rolling plans across many countries. Everything from stationing a few dozen U.S. troops in Australia’s remote north to negotiating trade concessions from Japanese rice farmers could be labeled as part of the pivot. Essentially, these agendas were always developing, always ongoing, never completed, and in that indeterminate state much more difficult to pin down as successes or failures. With Clinton at State, America was permanently pivoting and resetting, and every action great and small was fitted into that narrative.

Now, compare Clinton with Kerry, who has taken a very different approach. Kerry’s more limited travel history seems stuck in a loop — Paris, London, Tel Aviv, Vienna, Rome, repeat. He has not been to Togo. Contra Clinton, the current secretary of state has focused on just a few issues, in a few places, and has largely seen them through to completion. The Iran nuclear deal, the restoration of diplomatic relations with Cuba and the Paris climate accord all come to mind. Even when diplomatic issues have stalled, as with the Syrian civil war and with talks between Israelis and Palestinians, he has remained dogged. Kerry has visited Israel fourteen times as secretary of state compared to Clinton’s five, and he has had more than 375 phone calls, totaling 130 hours, with Israel’s Prime Minister Benjamin Netanyahu. Importantly, he has also staked his reputation on the results. The sharpest critics of the Iran deal will agree with its supporters on this point: Kerry owns it. His legacy is inextricably tied to the nuclear agreement. For better or worse, it will be a line in his obituary. The same can be said of the new U.S. embassy in Havana. It’s difficult, however, to say the same of any single issue pursued by Clinton, who went to pains during the presidential campaign to distance herself from everything up to and including the Trans-Pacific Partnership.

Modernity has made the job of secretary of state especially grueling. It is rare for America’s top diplomat to last more than one presidential term. Time is scarce. The next secretary of state’s starting point, then, is to decided right away whether to focus on a few big issues in a few places, à la Kerry, or to pursue a hodgepodge of ongoing policies across the globe, à la Clinton. Clinton would argue — indeed, she did argue — that paying attention to small places yields surprising results. “Going there, making the personal investment, has a real strategic purpose," she said about visiting Togo and the Cook Islands. But Kerry, in comparing the final negotiations of the Paris climate agreement with the final negotiations of the Iran nuclear deal, cautioned against such itinerancy. It is much better, he explained, to finish what was started where it started. “If you’re not present, bad things can happen,” he said. “If you’re not there, there can be a sudden shift in the negotiations and you can lose everything if you’re not ready to head it off at the pass.”

Kerry’s style is instinctively appealing. It has more of the romance of a bygone era’s momentous diplomacy with its hard-fought, high-stakes negotiations and the clink of glasses upon completion. It’s also easier to judge from the outside; the Iran deal will either hold or not, for example. Yet it is Clinton’s style that looks to be the better way forward for Trump and his top diplomat.

First, there are not really any opportunities similar to the Iran nuclear deal or to the opening of Cuba teed up and ready for the next secretary of state to act on. Rapprochement with North Korea, for instance, is unthinkable. Venezuelans, Cubans or Iranians might one day replace their governments with ones more conciliatory to the United States, opening an opportunity for a grand diplomatic gesture by the Trump administration, but this looks unlikely anytime soon. If anything, Trump’s administration may spend the first few months undoing much of President Obama’s work regarding Havana and Tehran.

Second, Trump’s secretary of state, like Clinton, might instead want to pursue more incremental, varied policies under a single, flexible organizing rubric. The United States would no longer be pivoting or resetting, but rather prioritizing America, to rework one of Trump’s campaign slogans. Such a rubric could accommodate almost any policy from sending troops into Syria to taking them out of South Korea. It could, for instance, offer an organizing principle for a set of bilateral trade agreements, in lieu of a large regional pact, which is what the incoming commerce secretary has already said will be the goal. Prioritizing America might even be loose enough to accommodate some significant diplomatic overture toward Taiwan, if the administration so chooses, not as a defense of democracy abroad, but rather, as a means of pushing back against supposed anti-American aggression by Beijing. This flexibility in specifics, all without having to concede any departure from the overarching agenda, would save the administration from overcommitting on a single, big mistake in its first months.

Third, there are benefits to the busy, jetset schedule and the limits it imposes. If Trump is sincere in his plans to pressure NATO members, Japan and South Korea to shoulder a much greater share of defense costs, then Trump’s secretary of state may soon find frosty welcomes in Brussels, Tokyo and Seoul. There will be pushback. Yet prolonged negotiations in these capitals with the secretary onsite would only delay the inevitable, which is these countries spending more to preserve the alliances (as some have already begun to do.) The easiest way to limit the secretary’s time in these countries to only what is necessary, of course, is for him to be needed elsewhere — visiting Colombia, Vietnam, Saudi Arabia or even Togo. It’s an inelegant strategy, brash toward historic and stalwart U.S. partners, but one worth considering if allies’ defense spending is a paramount concern for the Trump administration.

Trump’s pick must decide — and decide soon — which example to follow, Clinton’s or Kerry’s, and in so doing decide whether or not a small African country and its ilk are worth top-level visits. Togo, or not Togo, that is the question.