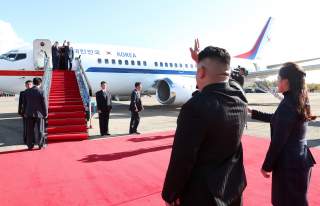 Yet even though the command flies the UN flag, “there currently exists to relationship with UN Headquarters other than submitting an annual report,” General Eyre said in his October speech. Instead, it is entirely run by the Pentagon, with a line of command running from General Brooks to the chairman of the Joint Chiefs of Staff. According to the Department of Defense, the chairman—a position currently held by General Joseph E. Dunford Jr.—is the principal military adviser to the president, the secretary of defense and the National Security Council.

At present, the primary function of the UNC is to oversee and enforce the armistice in the southern half of the Korean peninsula by monitoring the Military Demarcation Line that marks the aerial boundaries between the DPRK and the ROK over land and sea. As part of this responsibility, it also controls all movement across the border and through the DMZ (it's that authority that allowed the UNC to review the inter-Korean military agreement). The UNC is also responsible for dialogue with the the militaries of North Korea and China.

The command is reinforced by a UNC Security Battalion, which patrols the Joint Security Area in Panmumjom, and a UNC Liaison Group, which is composed of defense attaches from the sending states (“It’s a lively group,” said General Eyre, adding that it meets with the UNC on a weekly basis). But the command’s most important—and least understood—component is the UNC Rear, which is based in Japan. Under its mandate, which is made possible through the U.S.-Japan Status of Forces Agreement, the UNC Rear would have the responsibility of facilitating U.S. and UNC mobilization to Korea in case of a second Korean War.

Over the past year, UNC Rear has been instrumental in organizing air and sea surveillance operations that monitor North Korea’s alleged evasion of the sanctions imposed by the UN Security Council. Those operations, which include Japan’s Maritime Self-Defense Forces, have continued until the present. In September, even as the DPRK and the ROK were moving forward with their peace process, Australia and New Zealand joined the U.S. and Japan in maritime surveillance operations.

The UNC Rear, which is based at Yokota Air Base in Japan, includes seven American installations. They include the massive U.S. naval base at Yokosuka as well as Sasebo naval base in Kyushu and two of the most important U.S. bases in Okinawa, Kadena Air Base and Futenma Marine Corps Air Station, according to an official UNC Rear publication.

These bases, General Eyre said, that would “coordinate the sustainment of coalition warfare supporting the CFC and USFK” if hostilities were to break out in Korea. As tensions escalated last year over the DPRK’s nuclear and missile tests, the UNC and its sending states had “serious discussions” on potential actions that would have originated at these bases, he added. But the sudden change in atmosphere, triggered by Kim Jong-un’s declaration that he had completed his “nuclear force” in November 2017 and the peace talks that President Moon initiated during the Olympics, altered the UNC’s approach.

According to General Eyre, the U.S. commanders of the UNC began taking measure to “revitalize” the UN Command several years ago. One of their first steps, he said, was to increase the permanent staff of the command. It has also tried to increase the number of states contributing to the UNC, although Eyre did not say if any new nation has joined.

As part of that effort, in January the U.S. and Canada organized a conference of foreign ministers of foreign ministers from a dozen countries that fought in the Korean War in Vancouver to “demonstrate international solidarity” with the UNC’s efforts to curb the DPRK’s nuclear and missile program. In an unusual move, they also invited civil society groups, including Women Cross DMZ, which negotiated with the UNC to cross the border at Panmunjom in 2015, to address the meeting. Then, earlier this year, the UNC brought in General Eyre as deputy command, making him the first non-U.S. officer to hold a senior position at the command. “General Brooks told me to engage widely,” he said, because “this is a pivotal time in Northeast Asia.”

As the peace process moves forward, General Eyre concluded, the UNC will continue to evolve. The developments in Korea since last January’s thaw, he said, are “positive signs of potential epic breakthroughs” that underscore the “growing interest in the UNC.” And while admitting that the command carries “historical baggage” as a result of being a direct “party” to the Korean War, he predicted that its role could go beyond its current mission. “The UNC, and I’m just throwing it out there, could expand its functions to enable every greater dialogue for wider regional security issues,” Eyre said.

But he acknowledged that some UNC decisions have caused tensions with South Korea. Just weeks before his appearance in Washington, for example, the UN Command used its powers to control traffic through the DMZ to block South Korea from sending a train from Seoul to the northern city of Sinijiu on the Yalu River as part of a joint ROK-DPRK inspection of their railway infrastructure. But the dispute was quickly resolved, allowing the Koreas to resume their rail inspection project.

Eyre also seemed to distance himself from criticism of the inter-Korean military agreement, which some in Washington view as problematic for U.S. interests in Asia. Pointing to the no-fly zone that U.S. officials reportedly objected to, he said that “UN equities are not touched” with the exception of medical evacuations from the DMZ.

“The challenge is to respect [South Korea’s] sovereignty while fulfilling our legal responsibility as defined in the armistice agreement,” the Canadian general concluded. “That’s a very fine line. But at the end of the day, we should be a force for lasting peace.” In the wake of the sweeping military agreements by North and South to demilitarize their border, that approach is beginning to work. The events of October show that, with the right changes to the command and the continued involvement of both Koreas, the UNC offers some hope for resolving one of the most intractable conflicts of the last century.

Tim Shorrock is a Washington-based journalist who grew up in Japan and South Korea. He has been writing about the Koreas since the last 1970s, and is currently a correspondent for The Nation and Newstapa/Korea Center for Investigative Journalism.