Can the United States Overcome These 4 Nuclear Challenges? 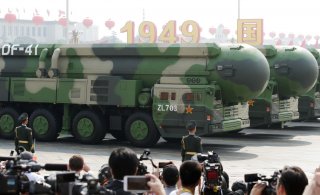 Four new geostrategic realities are challenging U.S. deterrent and arms control strategy. These are the rise of China’s nuclear forces; the near-completed Russian nuclear build-up; the modernization of the U.S. nuclear deterrent; and the need to defend against directed energy and hypersonic, maneuverable missiles.

Second, the initial operating capability for new U.S. nuclear platforms and much of the United States’ new conventional weaponry begins in 2028-2030, a window of opportunity during which China or Russia might act militarily against the Baltics or Taiwan.

Third, while the United States has built a very modest number (forty-four) of interceptors to defeat long-range ballistic missiles, opponents claim their deployment in 2003-2004 prevented the Russians from agreeing to ban multiple-warhead land-based missiles and encouraged the Chinese to begin to build multiple hundreds of such missiles, making future arms control deals impossible in the near term.

And fourth, all these factors have called into question what future deterrent policy and arms control strategy the United States should adopt. This includes how to deal with two nuclear-armed peer competitors, both of whom are undergoing significant conventional armed buildups. And both appear to be dedicated to an emerging strategy of “escalate to win” where the threatened but limited use of nuclear weapons in regional conflicts might get the United States and its allies to stand down, a marked change from the Cold War.

The Department of Defense has now confirmed China is building to at least 1,000 warheads by 2027-2030, although even this number implies most of the DF-41 missiles being deployed in upwards of 350 silos would hold at most one to two warheads compared to the ten the missile is capable of deploying.

As for intent, while serious analysts no longer claim the Chinese silos are just for windmills, disarmament advocates now blame the United States for the Chinese buildup, citing the U.S. nuclear modernization program and the 2003-4 missile defense deployment under the George W. Bush administration. In short as David Trachtenberg of NIPP explains, disarmament enthusiasts believe in old think: “China is only expanding its nuclear forces in part to maintain a deterrent that can survive a US first strike and retaliate in sufficient numbers to defeat US missile defenses,” concluding that in any case, China’s build is nothing with which to be seriously concerned.

Such views are reminiscent of the 1960s when Secretary of Defense Robert McNamara assumed “There is no indication that they (the Soviets) are catching up or planning to catch up. … It means that the Soviets have decided that they have lost the quantitative race, and they are not seeking to engage us in that context. It means there is no indication that the Soviets are seeking to develop a strategic nuclear force as large as ours…”

Of course, while the United States agreed to ban missile defenses under the 1972 Anti-Ballistic Missile Treaty with the assumption that the Soviets would, in fact, not match U.S. nuclear capability, the exact opposite occurred. Again, as Trachtenberg explains, “The Soviets saw the U.S. agreement to remain defenseless as an invitation to expand its own nuclear missile force and undermine a significant portion of the U.S. assured destruction capability, creating what later came to be knows [sic] as a ‘window of vulnerability’ for the United States.”

So too some five decades later, Chinese leader Xi Jinping’s recent statement that any country seeking to challenge China would have their “heads bashed bloody against a Great Wall of steel,” is hardly a restrained minimal deterrent strategy. Admiral Charles Richard of U.S. Strategic Command warns that China’s “strategic breakout…is building the capability to execute any plausible nuclear employment strategy — the last brick in the wall of a military capable of coercion.”

Chairman of the Joint Chiefs General Mark Milley put it starkly as well:  “[I]f we, the United States military, don’t do a fundamental change ourselves [sic] in the coming 10-15-20 years, then we’re going to be on the wrong side of a conflict” with China.

The U.S. minimal missile defense deployment does not require China to develop an arsenal of thousands of warheads to be overcome, any more than the absence of any missile defenses from 1972-2002 stopped the Soviets from building a nuclear arsenal to in excess of 10,0000 deployed warheads. This is especially true given that, following the 2003-4 deployment by the United States of a limited missile defense to deter rogue states, the Russians subsequently agreed to reduce their nuclear-deployed forces from the START I level of 6,000 warheads to 2,200 under the Moscow Treaty of 2002-3 and to 1,550 under the 2010 New START Treaty.

In fact, former Russian president Boris Yeltsin argued in front of the United Nations in 1993 that the United States and the Russians together should deploy worldwide, global missile defenses and simultaneously reduce nuclear weapons, a position the Reagan administration had first put forward in 1981, and which some important leaders in the George H.W. Bush administration also supported.

Unfortunately, the new Clinton administration killed the strategic missile defense in 1993, while the Russian Duma fumbled the proposed 1993 START II treaty, turning down ratification by changing its terms in 1998 (by insisting that whatever missile defense the United States pursued, Washington had to keep everything in the laboratory, which of course would have frozen missile defense at the research only level forever).

The key provision in the New START Treaty which was dumped was not reductions—those were eventually secured through the SORT and New START Treaties of 2002 and 2010. What was lost was the ban on multiple independent reentry vehicle (MIRV) warhead land-based missiles, first proposed by the Reagan administration in numerous National Security Defense Directives.

The United States sought to change such an imbalance through a combination of deterrence modernization and arms control. START I and II would bring Soviet and then Russian warheads down some 70 percent and U.S. strategic modernizing would add accuracy to the U.S. sea-based deterrent, improve the penetration capability of U.S. bombers, and add mobility if necessary to U.S. land-based missiles. These together would close the window of vulnerability to where the Russians could not pre-emptively destroy the U.S. land-based missile force without using a very high percentage of their nuclear forces, leaving them with a remaining imbalance of forces against the United States.

Unfortunately, the Russians under Vladimir Putin rejected the ban on MIRVed land-based missiles and now—even if abiding by the SORT and New START agreements—have a huge breakout capability. Why? Many of their land-based systems are MIRV-capable, with a breakout level of deployed warheads surpassing 4,500 under reasonable assumptions. On top of which, the Russians have five to six strategic systems now being deployed or under development that may not come under the New START restrictions.

Furthermore, none of the Chinese systems are under any limiting arms control regime. China’s new 350+ silos with the DF-41 missile could, in a two-to-four-year time frame, give the Chinese a strategic deployed nuclear force equal to the combined New START-limited U.S. and Russian forces, with alert levels some 266 percent of U.S. deployed strategic nuclear forces.

This puts the United States in a quandary. The Biden administration is undertaking its nuclear posture review, which the past five new administrations have all undertaken. Since 1991, each review has combined most of the elements of long-standing U.S. deterrent policy and, as a result, the United States has maintained a consensus on nuclear deterrent policy and force structure. But these reviews assumed a Russian nuclear force constrained by the same strategic arms agreements as the United States, a factor that is now seriously complicated by the growing likelihood of soon-to-be-peer Chinese nuclear force, an absence of any nuclear treaty limits on anything China deploys, and a new Chinese nuclear strategy.

The United States could deploy a portion of its land-based missile force in a mobile mode, as it examined for the Peacekeeper and the small intercontinental ballistic missile (ICBM) force proposed by the 1983 Scowcroft Commission report.

Or the United States could deploy a much expanded and robust space-based missile defense, including directed energy, which could blunt any possible pre-emptive or disarming first strike.