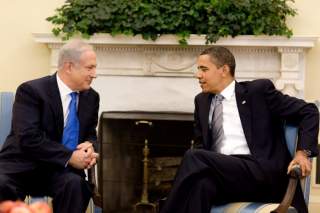 A senior German official told me in 2010, quite proudly, that under the leadership of Angela Merkel, Germany’s Iran policy had become a function of its relations with Israel. Whether Germany would sanction Iran or engage in diplomacy very much depended on Israel’s reaction. In its simplest form, the German official was explaining to me the process of “Israelizing” Iran—that is, turning one’s policy towards Iran broadly into a function one’s relationship with Israel.

No U.S. official has ever described U.S. policy on Iran in those terms to me. And if they did, most likely, it would not be accurate. But in the course of the last two years, particularly this past summer, we have also seen that Israel has played a far greater role in America’s Iran policy than many previously would have admitted. And for many on Capitol Hill, the reality is that Iran is primarily viewed through an Israeli lens.

This will be a major problem for President Obama, and for subsequent administrations seeking to sustain the nuclear deal with Iran. Not because Washington would not like to see significant changes in Iran’s posture towards Israel, or that it doesn’t believe that continued Iranian hostility towards Israel wouldn’t be a threat to the nuclear deal, but because the de-Israelization of Iran requires much more than just a change in Iran’s policy on Israel.

To understand why, we must first recognize why and how Iran came to be viewed from an Israeli lens by so many in Washington in the first place.

Iran was not an Israeli issue in Washington back in the 1980s, despite the hostile rhetoric of Iran’s then-ruler Ayatollah Ruhollah Khomeini. On the contrary, Israel spent significant diplomatic capital in Washington at the time trying to convince the Reagan administration to reach out to Tehran and come to terms with Iran’s theocratic regime. What later turned into the Iran-Contra scandal is just one of the many initiatives Israel took at the time to get Washington and Tehran back on talking terms. Back then, Israel was primarily concerned with the conventional military capabilities of hostile Arab states and viewed Iran as a potential ally and a balancer against the Arab powers.

Similarly, Washington’s pro-Israel organizations, led by AIPAC, were focused on countering the Palestinians and hostile Arab states. Iran wasn’t anywhere near their radar.

As the Oslo process transformed Palestinian leader Yasser Arafat from a terrorist enemy to a peace partner, Israel’s attitude towards Iran began to shift dramatically. To sell the deal domestically, then-Prime Minister Yitzhak Rabin felt that another threat needed to be looming in the horizon. Rabin asked rhetorically what the real threat to Israel was: the weak Palestinians or the rising Iranians?

Moreover, in the new geopolitical reality of the region after the fall of the Soviet Union and the defeat of Iraq in the Persian Gulf War, the common threats that had provided the basis for Israel’s alliance with Iran in the era of the Shah, and Israel’s support for U.S.-Iran dialogue in the 1980s, were now gone. A U.S.-Iran rapprochement under these circumstances would come at the expense of Israel’s interest rather than enhancing Israel’s regional position. “There was a feeling in Israel that because of the end of the Cold War, relations with the U.S. were cooling and we needed some new glue for the alliance. And the new glue… was radical Islam. And Iran was radical Islam,” Israeli analyst Efraim Inbar told me in October 2004.

A massive campaign was launched to depict Iran as “the greatest threat [to peace] and greatest problem in the Middle East.” Iran and its Shia ideology were the source of Islamic fundamentalism and an irredeemable threat, Israel argued.

This focus on Iran was a complete 180 by Israel, who only a few years earlier had pressed Washington to talk to Iran, to sell arms to Iran and to ignore Iran’s anti-Israel rhetoric.

At first, Israel’s new line on Iran was met with skepticism. That Iran suddenly was the new threat to the region was, “a controversial idea” with little credibility, according to The Washington Post. “Why the Israelis waited until fairly recently to sound a strong alarm about Iran is a perplexity,” argued the New York Times. (See Treacherous Alliance – The Secret Dealings of Israel, Iran and the US for details.)

This sentiment was shared by the Clinton administration, who felt that Israel was exaggerating the Iranian threat for political gain, mindful of the fact that the campaign came at a time when Tehran was lowering its profile on the Palestinian issue. “At that time, there were Iranian attempts to rhetorically soften the radical language of Khomeini,” Keith Weissman, the point person at AIPAC explained to me in an interview in 2004. “No doubt about it, there was a famous Rafsanjani interview… where he said that if it’s okay with the Palestinians, it’s okay with us.”

For AIPAC, however, the Israeli shift against Iran was heaven-sent. The loss of the Palestinians as an enemy had cost the powerful lobby dearly, and the peace process, if successful, could deprive AIPAC of its very raison d’être. AIPAC could now reinvent itself at a moment where merely countering Arab influence in Washington had become obsolete.

“AIPAC made Iran a major issue since they didn’t have any other issue to champion,” said Israeli academic Shai Feldman during a visit I made to his office in Tel Aviv in 2004. “The U.S. was in favor of the peace process, so what would they push for?” AIPAC needed a new issue, and Israel needed help in turning Washington against Iran. It was a win-win situation.

Iran was initially a gift that never stopped giving. Depicting Iran as a major threat was not particularly difficult mindful of Tehran’s anti-American and anti-Israeli rhetoric, even though in practice it was pursuing more moderate policies in the 1990’s compared to the previous decade. And once Ahmadinejad took power in Iran and began questioning the Holocaust, few people in Washington needed any convincing from Israel or AIPAC. “Ahmadinejad was literally writing AIPAC’s fundraising letters,” a former AIPAC insider told me. “All AIPAC needed to do was to quote Ahmadinejad’s latest statements and the money would be pouring in.”

Even the fight over the nuclear deal – that AIPAC lost – was good for business according to former AIPAC official Steven Rosen. “This fight has been good for AIPAC in that it brought in a lot of money,” he told Foreign Policy in September.

Letting go of Ahmadinejad after he left office was not easy for AIPAC. Letting go of the nuclear issue will be even more difficult. The losing battle it fought this past summer to kill the deal in Congress is telling. Much of the organization’s air of invincibility stems from its ability to pick battles it knew it would win and prevent conflicts it likely would lose from emerging in the first place. The showdown over the Iran deal was the opposite. AIPAC had failed to prevent negotiations, it had failed to push the Obama administration to adopt red lines that would have forced Iran to walk away from the table and, once a final deal was concluded, it felt it had no choice but to go up against the President of the United States, even though its chances of success were limited.

After all, Iran had topped AIPAC’s agenda since 1995. Sitting out a fight it had, in Rosen’s words, “spent 10 years preparing for,” could bring about the worst of all nightmares for AIPAC: irrelevance. At a moment when AIPAC was being challenged from the right from a new group of pro-Israel organizations (some funded by casino magnate Sheldon Adelson, who reportedly views AIPAC as too moderate), and from the left by J Street, neutrality was the worst of all options.

All was not lost for AIPAC over the nuclear deal, however. The mere fact that President Obama had to spend so much political capital defending the deal and securing support for it on Capitol Hill likely sent a strong signal to future presidents: Even if you ultimately can defeat AIPAC in a head to head confrontation, it will cost you so much political capital that you’ll likely have precious little left for your other priorities. Thus, even in defeat, AIPAC may have strengthened its deterrence.

Moreover, hard-fought defeats are good for fundraising. Clear-cut causes, even when losing, are preferable to lack of clarity. In other words, the Israelization of Iran will likely remain good for business, despite the passing of the nuclear deal. “This last battle,” Rosen said of AIPAC’s effort on the Iran deal, “may be remembered as the start of another growth spurt.”

Thus, even the reduction of a nuclear threat from Iran as well as a continuation of Iran disentangling itself from Israel (for instance, compare Ahmadinejad’s rhetoric on Israel to Rouhani’s silence on Israel, beyond his tweets wishing the Jewish people a happy Rosh Hashanah), is obviously helpful, but ultimately insufficient to de-Israelize Iran. Just like in 1993, when AIPAC abandoned Arafat and embraced Iran as its main threat, the abandonment of Iran today may only take place if a new threat emerges that takes its place. Perhaps the Boycott, Divestment and Sanctions movement will be that threat. But unless something emerges to replace Iran, there is little to suggest that Israel, AIPAC and Netanyahu are ready to let Iran be de-Israelized.