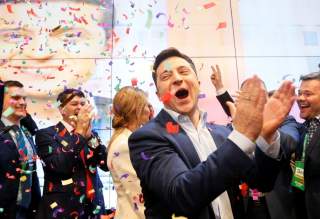 Outgoing Ukrainian president Petro Poroshenko is to be commended for presiding over an election that was generally free and fair and, more importantly, in accepting the outcome. Privately, however, he may be breathing a sigh of relief that he will not have to take responsibility for some of the major decisions Ukraine is facing—decisions which will prove to be difficult and unpopular.

His successor, comedian Volodomyr Zelensky, fits squarely in the mold of anti-establishment populist candidates who have been winning elections all throughout Europe—and his attractiveness as a presidential candidate for having played one on television carries echoes of how Donald Trump’s public persona in The Apprentice likewise helped to boost his presidential prospects. Zelensky ran, in essence, a kaleidoscope campaign—Ukrainian voters projected their dislike and anger at the failures of the Poroshenko administration to make good the promise of the Maidan uprising, how he has handled the situation with Russia, and the painful economic adjustments Ukraine has had to make to obtain financial assistance from the International Monetary Fund and to fulfill the criteria of the EU Association Agreement—onto a candidate with no clear platform of his own.

Yet, when one breaks down the voter bloc which coalesced to give Zelensky a commanding win in the second round, it is immediately clear that this is an unstable coalition—one that is likely to fracture quickly. Zelensky won voters by commanding margins in Ukraine’s south and east, many attracted by his promise to settle the conflict with Russia. Younger voters disillusioned by how quickly politics returned to pre-Maidan normality threw their support to an outsider and nonpolitician in the hopes that he could drain the Kyivan swamp. Zelensky’s few public statements included a commitment to pursue full membership in the European Union and NATO, which is indistinguishable from Poroshenko’s own aspirations, but helped to deprive Poroshenko of harvesting more nationalist votes in the west. Finally, a vague set of comments about reversing some of the economic pain that Ukraine has suffered over the past several years pulled in the older generations who otherwise might have reluctantly preferred to stick with the political status quo.

Not only will Zelensky have to demonstrate that he can recruit the expertise (which he himself admits he lacks) to develop policies to address all of these things, he will have to find a way to hold together a government that may quickly fracture over policy priorities. He also has a major problem, in that, like French president Emmanuel Macron, he comes to the presidency without any political base in the Rada. Indeed, many of his “clean out the swamp” inclinations will run full force into a brick wall of Ukrainian parliamentarians who will not be so quick to surrender parliamentary immunity. He will also be under challenge to define his relationship with oligarch Ihor Kolomoisky-with some of the Maidan activists keen to monitor whether Zelensky's anti-corruption measures are carried out without respect to persons or, as so often in the past in Ukraine, only selectively applied against political opponents.

There is no reason for the Rada to be dissolved prematurely, so Zelensky will need to see if he can recruit a majority to support him during those first six crucial months in office—and he will have to decide whether he can form some sort of political movement that will contest for Rada seats in the October elections. Otherwise, he could end up stalemated against the legislature.

Zelensky also must deal with the reality of “Ukraine fatigue” in Europe where every election or revolution is presented as a new “year one” reset. For Zelensky to meet any promises of economic relief for Ukrainians, he will need more aid and loans and a renegotiation of debts coming due. He must also see if European leaders will be more inclined to help him by pressuring Russia not to cease energy flows via the Ukrainian pipeline system. While Zelensky received congratulations after his election, it is unclear as to whether he will receive additional forthcoming assistance. Zelensky might succeed in getting Germany to finalize arrangements with Russia that, after Nordstream 2 comes on line, some remainder amount of Russian energy will continue to use the Ukrainian lines, but no matter what, Ukraine stands to lose income from energy transit during the Zelensky term in office.

Zelensky ran on the vague promise that he, more than Poroshenko, would be able to wrap up the the conflict with Russia. This was part of the attractiveness of his protest candidacy in parts of the Ukrainian East, where, despite the events of the last several years, economic linkages with Russia remain important. Nevertheless, prior to the vote, Moscow imposed new sanctions on trade with Ukraine. Vladimir Putin has shown no evidence of welcoming the electoral change in Ukraine or that he prefers Zelensky to Poroshenko as an interlocutor. Russia has no incentive to give Zelensky a boost by making any concessions at this point, especially if he proves unable to govern. Russia instead may prefer to sit back and to see whether the situation in Ukraine becomes more chaotic—and how Moscow might be able to strengthen its hand as a result. The Kremlin will be especially interested in mining any further deterioration in Ukraine's economic position as part of its domestic campaign to show that protests and elections do not lead to improved conditions—and why Russians should be grateful for the stability the Kremlin provides.

Zelensky is going to find he won’t have much of a honeymoon—either within Ukraine or with Ukraine’s main foreign partners and its key rival. How much leeway he will get remains to be seen—and it is way too premature to determine whether his election marks a turning point in Ukraine's crisis or another disappointment.