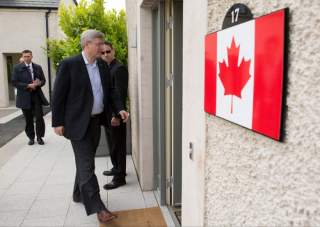 “Canada is not the party. It’s the apartment above the party.” If he was talking about the Canadian economy, comedian Craig Ferguson was wrong. During the ‘90s and early 2000s, the U.S. economy, fueled by a leverage bubble, saw home prices skyrocket, unemployment plummet, and substantial GDP growth. After the party was over, Canada woke up tired but without a U.S.-style hangover.

Canadian employment surpassed its precrisis peak in January 2011. The United States only recently recovered the jobs lost during the downturn, and the two nations’ GDP growth came back on similar trajectories. The “Arctic Wolf” economy made it through the Great Recession seemingly unscathed and its banking system required no bailouts. In the short term, the combination of a housing market that never meaningfully corrected and a slow and steady increase in household debt should give pause to those observing the Canadian economy.

The Case-Shiller 20-City Composite Housing Index indicates that from 2000 to their 2006 peak, U.S. home prices increased 107 percent, while the National Bank of Canada and Teranet 11-City Composite shows Canadian home prices had increased 97 percent at their 2008 peak. Today, Canadian home prices sit 21 percent above their prerecessionary peak. U.S. home prices continue to languish some 18 percent below precrisis levels. One way to interpret this data is to say that Canada is poised for a housing correction.

Moreover, while U.S. households spent the last five years deleveraging, Canadian households have increased their debt levels. At the beginning of 2014, the outstanding household debt in Canada was 164 percent of disposable income. The United States peaked at nearly 128 percent in 2008, but it has since declined to 112 percent.

While Canada likely faces a near-term correction, a combination of its regulatory environment and banking culture make it unlikely to have (or cause) a 2008-2009-style crisis. For starters, much of the housing boom is being driven by investment in real estate by foreign investors and immigrants in mostly Western cities. Canada has stopped issuing investor visas, and this may deflate some of the more expensive housing markets as wealthy Asian immigrants go elsewhere. Housing prices are already declining in some Canadian markets.

A soft landing, though not painless, is expected. The Canadian banking system has tighter regulations and fewer institutions than the U.S. banking system. As a recent Federal Reserve research note pointed out, the United States has suffered twelve financial crises since the mid-nineteenth century. Canada has suffered none. After deleveraging, the United States is sitting at historic lows in terms of the household disposable income needed to cover debt service payments, but the figure is still about 10 percent. Canadians, who are witnessing increases in their disposable incomes, require only 7 percent to service their debts.

In the long run, there are reasons Canada may be the developed economy to watch. In a world filled with countries fighting a demographic nightmare, Canada attracts 250,000 immigrants, or three-quarters of a percent of its total population, per year. Statistics Canada projects population growth would be negative between now and 2060 with no immigration, but will increase by more than 70 percent in a scenario with high levels of immigration.

Much of this immigration originates from Asia. Canada’s historical ties to Great Britain and Europe ensured that between 1955 and 1970 more than 50 percent of immigrants were European with a large percentage being British. Asian migration was almost an afterthought at this point. Today, though, Brits comprise only a few percentage points, and Europeans as a whole constitute only 13 or 14 percent, while Asian countries account for more than half of immigration to Canada.

Immigration is a principle driver of population growth, and a key differentiator of the Canadian economy from the rest of the developed world. Canada’s population has grown about 1 percent per year since 2000 with immigration driving about three-quarters of that growth.

Furthermore, immigrants to Canada tend to be between the ages of 25 and 44—prime working age, and could push down, or hold constant, Canada's age profile. At the end of 2013, the median age in Canada was just over 40 years old. With continued immigration and fertility, Statistics Canada sees the median age remaining flat. And this could be an economic advantage. On the other side of the Great Lakes, the median worker age will rise from about 37 to 42, according to the Bureau of Labor Statistics. The United States is starting from a better position, but Canada wins in the long term simply by standing still.

Canada also has a countercyclical federal budget. As the Great Recession hit, the Canadian government increased spending, producing a budget deficit. But it never got out of control. At the federal level, Canada gross debt to GDP is only about 48 percent compared to about 100 percent in the United States. Canada sees a return to budgetary surplus—not in the distant future—but in 2015-2016. In fact, the Canadian government projects the federal debt level will decline to its prerecession level by 2017-2018—an enviable position in the developed world.

This lack of diversification could be construed as a sort of positive in that much of the world is white space for Canada. For instance, only 11.3 percent of Canadian exports go to Asia. Less than 10 percent go to Europe. This leaves ample room to build a presence in both economies. The growth of U.S. oil production is probably the greatest risk the United States poses to the Canadian economy. A stronger U.S. economy can buy more Canadian goods, but the United States takes 98 percent of Canadian oil and all of its natural gas exports. As the United States ramps production domestically, the shale boom has been blamed for weak Canadian crude pricing, and will likely continue to pressure pricing.

The recently negotiated Comprehensive Economic and Trade Agreement grants Canada preferential access to the EU, and trade gains for Canada could be more than 20 percent. Canada has also joined the Trans-Pacific Partnership talks and a comprehensive agreement would further trade with Asia. Progress in breaking through Asian trade barriers would be beneficial to increasing trade down the road. The large inflows of Asian immigrants may also bode well for building stronger trade and economic ties with the region. Canada will need strong ties in both Europe and Asia to reduce dependence on a strong U.S. economy. In any event, it will be a slow process.

The short view suggests the Canadian economy, with its high housing valuation and its continued buildup in household leverage, is doomed. But the long view depicts a Canada well positioned for the twenty-first century. In an age where many do not believe the developed world stands much of a chance, Canada stands out. Forget the Asian Tigers, the Arctic Wolf might be the surprise of the developed world.

Samuel Rines is an economist with Chilton Capital Management in Houston, TX. Follow him on Twitter: @samuelrines.