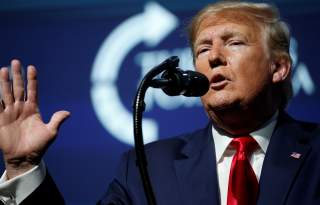 As the world wonders whether the prospects for a U.S.-Iran military clash have receded and ponders the next moves of the Trump administration in the Middle East, a key part of President Donald Trump’s statement has gone largely unremarked. When Trump condemned Iran’s record and announced new sanctions, did he also repudiate a foundational element of U.S. national security strategy?

Forty years ago, President Jimmy Carter made a commitment that the United States would guarantee the free flow of energy from the Persian Gulf region to the rest of the world. In his State of the Union address, he declared that instability in the region “demands collective efforts to meet this new threat to security in the Persian Gulf and in Southwest Asia. It demands the participation of all those who rely on oil from the Middle East and who are concerned with global peace and stability. And it demands consultation and close cooperation with countries in the area which might be threatened. Meeting this challenge will take national will, diplomatic and political wisdom, economic sacrifice, and, of course, military capability. We must call on the best that is in us to preserve the security of this crucial region. Let our position be absolutely clear: An attempt by any outside force to gain control of the Persian Gulf region will be regarded as an assault on the vital interests of the United States of America, and such an assault will be repelled by any means necessary, including military force.” His successor as president, Ronald Reagan, issued a “corollary” to the so-called Carter Doctrine in October 1981, whereby the internal stability of the governments of the region, as well as defending them from external attack, became a prime national interest of the United States.

The energy dependence of the United States and its key European and East Asian allies on Middle East energy provided the strategic rationale for American involvement in the region. Also, the elucidation of the Carter Doctrine was the strategic impetus for the creation, first of a rapid reaction force and then of an entire geographic combatant command, known as Central Command, or CENTCOM, devoted to the region.

Immediately after Donald Trump’s election in November 2016, Derek Reveron and I speculated as to whether the forty-fifth president might question the strategic logic of the U.S. commitment to the Middle East, given changes in energy production over the past decade. We noted that if shale oil enables the United States to achieve energy self-sufficiency, then a fundamental shift in U.S. foreign policy could occur. This shift would overturn the Carter Doctrine and the Reagan Corollary, which committed the United States to defend the countries of the Persian Gulf. While oil is a global commodity, a disproportionate share of U.S. military power is in the Middle East to ensure Gulf countries can export oil to China, India, and Japan.

Over the last three years, under my leadership, our economy is stronger than ever before and America has achieved energy independence. These historic accomplishments changed our strategic priorities. These are accomplishments that nobody thought were possible. And options in the Middle East became available. We are now the top producer of oil and natural gas anywhere in the world. We are independent and do not need Middle East oil.

To my ear, this sounds like a repudiation of the Carter Doctrine. It certainly doesn’t sound as if the president accepts Carter’s formulation that the Persian Gulf is the equivalent of the homeland in terms of importance to U.S. national security. He instead seems to suggest that its economic shift is leading to a reordering of U.S. strategic priorities, whereby the Middle East becomes less critical in the grand scheme of things. Moreover, as part of his continued insistence on burden-sharing, the president’s more cryptic remarks prior to this section, for “NATO” to become more involved in the Middle East, seems to suggest that Trump will insist that U.S. allies who continue to depend on Middle Eastern sources of supply should take up more of the burden and costs of developing and sustaining the Middle Eastern security architecture—or, as he has suggested in other formats, American allies should reorient their energy purchases to consume more that is produced from North America.

This was a statement from the podium of the White House, not a State of the Union address. And while comments, even those made by the commander in chief, indicate intent, the real test is when the language of speeches begins to be transferred into concepts and capabilities and applied via programs and budgetary requests. Moreover, the high degree of inertia within the U.S. national security system means that even if this is a sustained strategic shift in the minds of the president and his national security team, then it will take years for it to manifest itself in how the U.S. deployment around the world. After all, it took three years from Carter’s declaration on Capitol Hill to the moment CENTCOM was created.

Nevertheless, the gravity of the moment should not be understated. Trump appears to have nullified the Carter Doctrine. The U.S. national security community—and the nations of the region—will be paying attention to see whether this was a remark made in passing or whether the White House will begin to conceptualize what this might mean in terms of American national security priorities.