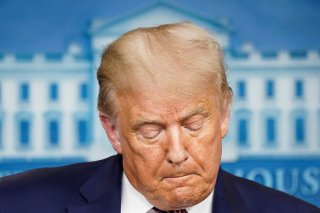 Editor’s Note: Please see a counter perspective, courtesy of Dimitri K. Simes, President and CEO of the Center for the National Interest and Publisher of The National Interest, as part of a two-part debate on the 2020 Election and Donald Trump. You can read the essay here.

FOR TOO long, many Donald Trump supporters have argued that however debased his character might be, his policies—notably his support for “values” (read: “Christian values”), his pushback against illegal immigrants, and his nomination of conservative judges—suffice to command support. On the other hand, many Republicans who, unlike Trump, actually have been lifelong party members and support both values and conservative judges, argue that whatever the merits of his policies, character matters—indeed, it outweighs other considerations. While there is little debate about the man’s character, it is arguable that far too many of his policies undermine both America’s cohesion and prosperity at home and its leadership abroad.

There is really little to add about Trump’s character that has not been repeated ad nauseam not only by his political opponents, but by both principled Republicans and the many officials who were part of the revolving door that is the Trump administration. Since he has not been subject to a formal mental evaluation, he cannot be called a narcissist. But he has consistently exhibited narcissistic tendencies. How else to describe someone who, at one time or another, publicly and repeatedly has described himself as the leading expert on any subject he has addressed, be it politics, taxes, trade, foreign policy, the military, and just about anything else?

ONE CANNOT call Trump a racist; after all, he insists that he “does not have a racist bone in his body.” Yet his own statements—whether to the media, or in his innumerable tweets, belie his self-proclaimed innocence. A central theme of his presidential campaign, and a primary objective once he took office, was to build a wall to keep out Mexican “rapists.”

Trump virtually opened his presidential term by banning residents of seven Muslim majority countries from entering the United States; he later added six more countries, five of which were similarly predominantly Muslim. He made it clear that he preferred immigrants from what he assumed was lily-white Norway, while terming Haiti and African states “shithole countries.” He did not condemn the Charlottesville marchers in the 2017 Unite the Right rally who assaulted a Black man and chanted anti-Black and anti-Semitic slogans such as “Jews will not replace us.” Instead, Trump asserted that there were “very fine people on both sides.” Gary Cohn, Trump’s most senior economic advisor, clearly was unhappy with Trump’s response; he nearly resigned and did in fact leave the administration eight months later.

Trump’s tweets and retweets have included slurs against minority groups. He has railed against efforts to remove Confederate symbols of all kinds. In one notorious case, he retweeted a video of a man shouting “white power.” He has tweeted that Black Lives Matter is a “symbol of hate.” His appeals to his base increasingly echo those of George Wallace. If Trump is not a racist, he certainly has given America’s bigots a triumphalist sense that they have not had since the Ku Klux Klan marched down Pennsylvania Avenue nearly a century ago.

Trump appears indifferent to the role of the military in a free society and has seriously damaged civil-military relations. He has employed the military, and the defense funds needed for other programs, to build his border wall on the highly questionable grounds that there is a national security threat emanating from Mexico. He misused the National Guard, having troops clear a path from the White House so that he could hold a photo-op with a Bible that he never opened before a church he never entered. He intervened in a court martial of a Navy SEAL. He made it clear that he opposed the Pentagon’s awarding a major contract to Amazon for developing a cloud-based enterprise system due to his personal animosity toward its owner. And he has threatened to veto the National Defense Authorization Act that is certain to include a bipartisan provision to begin a process of renaming bases currently carrying the names of Confederate generals.

One can debate whether Trump is corrupt in the precise legal sense of the term. But he certainly exhibits corrupt behavior. How else to describe someone who appoints his unqualified son-in-law and daughter as senior advisors? Whose daughter subsequently receives special trademark treatment from China if not because of her influence in the White House? Who maintains a constant watch over the fortunes of his business despite his having to divest himself from its activities? Who encourages visiting officials to hold meetings at his country club? Who reportedly had the American ambassador to London request the government to move the British Open to a Trump-owned golf course? And, most troubling, who publicly (not to say privately) coddles dictators such as Russia’s Vladimir Putin and Turkey’s Recep Tayyip Erdogan, who happen to have the final say on whether his companies can open resorts or hotels in their countries?

TRUMP’S CHARACTER bleeds into his policies, which supposedly constitute the basis for the more rational of his supporters. In the realm of national security, the combustible combination of character and policy is leading the nation down an abyss from which it could take years to recover.

One might begin where the aforementioned discussion of character left off: the president’s relationship with Putin and Erdogan. No one can fathom why the president of the United States has gone so far out on a limb to support the Russian autocrat. His statement that he believed Putin more than his own intelligence community regarding Russian interference in the 2016 presidential election was simply stunning. He has displayed studied indifference to Putin’s annexation of Crimea and incursion into Ukraine. Indeed, it was only with the greatest reluctance that he imposed Congressionally-mandated sanctions on Russia.

Trump has continued to lobby for Russia’s re-inclusion in the G7, though Russia fails to meet either the political or economic standards of that group of the world’s wealthiest nations. Finally, whether or not he was aware of the alleged Russian offers of bounties to Taliban militiamen to kill American troops—perhaps in revenge for their killing the “Little Green Men” of the Wagner Group in a Syrian firefight—Trump’s lack of concern, indeed, his assertion that the possibility of a Russian bounty is a “hoax,” speaks of his ardent desire not to aggravate what already is serious Congressional and, indeed, popular hostility toward Russia in general and Putin in particular.

Actually, Putin’s behavior is characteristic of most Russian leaders since Ivan the Terrible named himself tsar; sadly, Trump is playing into his hands. What George Kennan postulated in his Long Telegram about the Soviets applies equally well to Putin:

At bottom of Kremlin’s neurotic view of world affairs is traditional and instinctive Russian sense of insecurity ... Russian rulers have invariably sensed that their rule was ... unable to stand comparison or contact with political systems of western countries. … Efforts will be made ... to disrupt [Western] national self confidence, to hamstring measures of national defense, to increase social and industrial unrest, to stimulate all forms of disunity … poor will be set against rich, black against white, young against old, newcomers against established residents.

It is hardly to be expected that Trump is familiar with Russian history, with the Long Telegram, or for that matter, with Kennan. Some observers speculate that Trump is motivated by his business interests, as has been noted. Whatever his motives, there is no denying that Trump creates the impression that he is little more than Putin’s poodle whenever he encounters the Russian leader.

Trump’s close relationship with Erdogan is equally puzzling. The Turkish leader, like his Russian counterpart, has both brutally crushed dissent at home and relentlessly pursued the resuscitation of the country’s empire manqué. Trump has never expressed any concern about Erdogan’s human rights violations, even when Turkish government thugs beat peaceful protesters on the streets of Washington. Additionally, Trump has ignored the Turkish leader’s close ties to Hamas, which the president’s own administration labels a terrorist organization. Nor has Trump troubled himself about pulling the rug from under the Syrian Kurds, a major Erdogan objective, despite their fighting and dying alongside American and coalition forces fighting the Assad regime. But then again, the president has little use for allies of any sort.

Trump’s hostility toward immigrants has likewise merged with, and guided, his policy priorities. He has deployed troops to the Mexican border, diverting them from other critical missions elsewhere in the world. And he has ordered the reallocation of defense funds intended for important military construction and for deterring Russian adventurism in Eastern Europe instead to pay for his so-called “beautiful” wall.

Trump has railed against NATO ostensibly because members do not “pay their way,” and has announced his intention to draw down troops in Germany, whose mission is as much to preserve American interests in the Middle East as it is to deter Russian aggression. He has had nothing good to say about the European Union that, with its predecessor organizations, since the early 1950s has fostered peace in Europe through the expansion of trade and the partial disintegration of borders. Indeed, it was over a relationship with the democratic EU that the Ukrainian crisis exploded, and ultimately led to Russian intervention. Trump has so alienated his European allies that they have actively resisted Washington’s efforts to maintain crushing sanctions against Iran, thus demonstrating the waning of American influence in Europe after leading the West for over seven decades.