The Case for Fort Trump Couldn’t Be Stronger 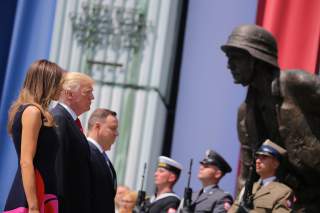 Poland's President Andrzej Duda met with President Donald Trump at the White House Tuesday to talk defense. Poland’s defense. But then, Poland’s defense is Europe’s defense, and European defense has been a core U.S. foreign-policy mission for more than a century.

Poland is crucial to European defense because it is the keystone of a NATO arch that runs from Norway in the Arctic to Turkey in the Caucasus. NATO’s northern flank is secure. NATO’s southern flank is in disarray as Turkey’s commitment to NATO comes under doubt. But it is in the center that any future conflict will be won or lost.

Germany used to be the bulwark of NATO’s central front, but today Germany’s defense spending is among the lowest in Europe and its operational readiness is abysmal. Just as important, the German public does not support NATO’s mission or America’s role in it. By a 42 percent to 37 percent margin, Germans want U.S. troops out of their country.

Even more alarming is the fact that only 40 percent of the German public supports the use of German troops to defend another European country from a Russian invasion. The corresponding figure for both the United States and Poland is 62 percent. That’s right: Americans are more willing to send troops to defend a European ally than Germans are.

Since the end of World War II, the bulk of American ground forces in Europe have been based in Germany. The U.S. Army bases its NATO combat brigade in Sembach, in the far west of Germany. Thirty years ago, Sembach was less than three hundred miles from the Warsaw Pact frontier. Today, it is more than eight hundred miles from the nearest Russian troops—and Europe’s transportation infrastructure is not up to the challenge of rapidly shifting American forces to the Polish frontier.

In short, Germany is the wrong place with the wrong politics to be America’s European defense hub. In an increasingly likely nightmare scenario, a future German government could even prevent the United States from using its bases on German soil to come to the aid of a NATO ally in need. A pacifist Germany may be a relief to its long-suffering neighbors, but it is not a reliable ally in time of war.

And then there’s Nord Stream. In 2011, Germany built a pipeline under the Baltic Sea to Russia, so that it could import natural gas directly from Russia's state-owned Gazprom without having to worry about political interference from transit countries like Poland and Ukraine. It is now building a second phase—Nord Stream 2—that will double the capacity of the original pipeline, supplying enough gas to meet all of Germany’s needs.

Any direct conflict between Russia and Germany would necessary mean cutting off Germany’s gas supply. But Germany will now have every incentive to sit out any future conflict between Russia and its other European neighbors. Nord Stream is just one more reason for the German public to renege on its NATO commitments, even as Germany’s leaders vilify Donald Trump for raising this obvious truth.

Poland’s President Andrzej Duda is offering to build Fort Trump as a new base for American forces in Europe. The Polish government may be very controversial at home, but this is one issue on which the Polish people are broadly united. Virtually the entire Polish political class—even those who bitterly oppose Donald Trump—support the presence of U.S. troops. And they are apparently willing to pay the price for logistical support. The case for Fort Trump couldn’t be stronger.

Salvatore Babones is an associate professor of sociology and social policy at the University of Sydney.