The Case for Scottish Independence Is Weaker Than Ever 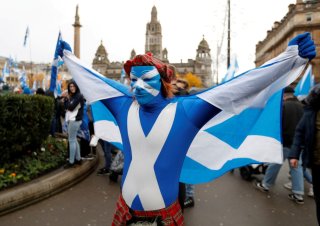 Nicola Sturgeon, the leader of the Scottish National Party (SNP) and first minister of the devolved government of Scotland, will be on tour in Washington, DC this week. Ostensibly, the purpose of the visit is to deliver a keynote speech on Scotland’s role in European energy security at a conference organized by the Brookings Initiative on Climate Research and Action. But the Scottish leader is a politician at heart and has her own political goals. Sturgeon will also be meeting a wide range of Washington politicians, and attending a number of other events on climate, energy security, and the war in Ukraine. This visit resembles nothing so much as a state visit by an incumbent head of government—entirely by design.

For readers who are not familiar with the SNP and Sturgeon, they exist to secede from the United Kingdom. They have few other fixed policies, and everything else is in service of that ambition.

The party fought and lost a referendum on secession in 2014 when the people of Scotland voted 55-45 percent against it. The issue was supposed to have been settled for a generation. But Brexit reopened the debate: the people of Scotland voted to remain in the European Union by almost two-to-one; but overall, the United Kingdom voted to leave the European Union. This huge gulf of opinion on the European project, and the constitutional and economic consequences of the UK leaving the bloc, have galvanized the independence movement, and now opinion in Scotland on the Union with England, Northern Ireland, and Wales is evenly split, and occasionally the public is even marginally in favor of independence. Sturgeon is, therefore, trying to conscript the moment for her cause and is in the process of trying to organize a second independence referendum.

Organizing a second referendum is far from a simple matter constitutionally, but the main obstacle is that any referendum requires consent from the UK government in London in order for it to have legal weight—and the government in London, whose popular appeal depends at least in part on an influential “global“ Britain, whole and entire, is obviously not going to want to cede Scotland.

Sturgeon knows this is a battle of perceptions: while technically London has every right to determine whether there should be a referendum, it can probably be shamed into granting one, if the “democratic injustice” of denying the vote becomes too difficult to bear—either for London’s international prestige or for the domestic electorate.

And so, Sturgeon will be in Washington, looking for all the world as an international stateswoman. And she is good at it. Personal public relations for the leader is something her party has perfected. This was seen during the COP26 conference in Glasgow last year, where she played host for the cameras despite having no formal role in organizing or running the event. Domestically in Britain, Sturgeon is a national figure, one of the most popular politicians—even outside of Scotland. No matter that her party has performed badly in government in Scotland over the past eight years.

Americans, and the American leaders that Sturgeon will meet during her trip to Washington, don’t necessarily know all this. But they should be aware. There are bigger things at stake than just the desires of Sturgeon’s party in Scotland.

But Americans must know the facts. In becoming independent, Scotland would paralyze the nuclear defensive stance of the UK for at least five to ten years, blowing a huge hole into NATO’s defensive posture at a time when the alliance is tested unlike any since the end of the Cold War. The entire nuclear submarine infrastructure that the UK relies on is based in Scotland, and the SNP has pledged to close it down upon independence. Relocating the infrastructure is going to be hugely expensive, and more importantly, it will take a long time.

Independence would also hamper Scotland’s ability to help mitigate the energy crisis, and would adversely affect Europe’s long-term energy security. Scotland is potentially home to one of the biggest potential net surpluses in energy, especially in renewables. But leaving the UK will leave the Scottish government with a 10-20 percent black hole in its budget, hampering Scotland’s ability to roll out the infrastructure necessary to support the fast development of those resources.

The current moment is a profound opportunity for the secessionists. But ironically, it is also the worst possible time for delivering Scottish independence. It is economically and politically inauspicious and would make Scots poorer and the entire Western Alliance less safe. Nicola Sturgeon knows what she wants. We must know that too—and be on guard lest we unconsciously aid her breaking up of the United Kingdom, and the weakening of treaty allies as we all face a newly dangerous and uncertain world.