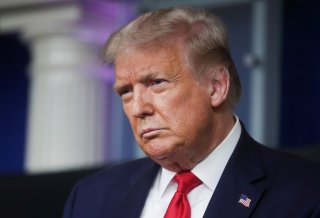 Within this environment, few in the mainstream media asked the obvious question: why would the Russians, with their unsentimental philosophy of giving preference to relations with existing governments, be prepared to take chances on supporting candidate Trump, whom by all indications they did not expect to win? A partial explanation could be Putin’s distaste for Hillary Clinton, who supported anti-government protests in Russia, and his dislike for the Obama administration, which tended, in Putin’s view, to patronize and lecture—going so far as Vice President Biden, during a 2011 visit to Moscow, advising Putin not to run again.

Unlike in the case of Trump, the Russians had a long history with the Clintons, going as far back as 1968. Shortly after the Soviet invasion of Czechoslovakia, when many were staying away from any association with Moscow, Rhodes Scholar Bill Clinton visited it for a Soviet-sponsored anti-war forum. Oligarchs close to Putin made major donations to the Clinton Foundation and paid sizable speaking fees to Clinton as a former president. Early during the 2016 campaign, according to informed sources in Moscow and Washington, former Democratic administration officials with good Russia connections told Moscow that it had little to fear from Hillary Clinton and should not pre-judge her conduct as president on the basis of her past behavior. They argued to Putin’s advisors that she was pragmatic and cynical, carried no special animosity toward Russia, and that Moscow would ultimately have an easier time with her than with the unpredictable and uninformed Donald Trump, who would likely be influenced by hardline Republicans vying for top positions in his administration.

There is indeed an abundance of evidence that both the Russian government and firms close to it became involved in the U.S. electoral process. As the Mueller Report and a growing consensus in the U.S. intelligence community made clear, however, the objective was not so much to help a particular candidate but rather to promote political polarization in the United States, and to do so in a less-than-secret fashion so that, as Moscow hoped, the U.S. government and the U.S. political elite more broadly would recognize that interference in Russian politics against the existing regime would come at a high cost. It was a combination of retaliation and deterrence, not difficult to predict knowing how much the United States had done in the name of democracy promotion, which—in the eyes of Russian rulers, particularly after the Maidan experience in Ukraine—was just another name for regime change.

THE DEMOCRATS and their supporters were determined to exploit the possibility of a Russia connection to their maximum advantage, regardless of the facts. I know this from personal experience: I endured a campaign launched by Democrats in the media, in Congress, in law enforcement, and in the former Obama administration to deny legitimacy to a newly elected president and to anyone even peripherally connected to him. In the process, collateral damage became perfectly acceptable.

A campaign against me started with a Democratic National Committee memo prepared shortly after Donald Trump spoke at an event at the Mayflower Hotel sponsored by The National Interest, which is published by the Center for the National Interest. The memo contains no evidence of any wrongdoing or inappropriate Russian connections on my part—or, for that matter, evidence of links to Donald Trump. The memo simply and somewhat plaintively concludes, “we don't have a ton on Simes.” All they had instead was an article from the neoconservative Washington Free Beacon—the publication that sponsored the Christopher Steele investigation of Donald Trump—and had a history of alleging other Washington think-tanks engaged in an untoward dialogue with Russia. However, according to the memo an opportunity to use the CFTNI to focus on Trump was well-nigh irresistible. It is clear that the Center would have not come under scrutiny if it had not hosted Trump's foreign policy speech at the Mayflower Hotel. The investigation was not just limited to me, but also included several other board members and senior staff with impeccable national security credentials, some of whom later joined the Trump administration. A look at similar Washington organizations with Russia programs—the Carnegie Endowment for International Peace, the Brookings Institution, and the Wilson Center—reveals that they were attacked in one way or another by critics of engagement with Russia. In each case Russian nationals, in contrast to CFTNI, were employed. Among them were people with acknowledged intelligence backgrounds. None of these organizations, however, even remotely experienced the extraordinary level of examination directed at CFTNI. Not coincidentally, they were headed by former Deputy Secretaries of State from Democratic administrations (Carnegie and Brookings) or a former prominent Democratic member of Congress (Wilson Center).

Both the Center for the National Interest and I were subjected to a protracted and costly process of allegations and investigations. This resulted in the Mueller Report devoting no less than ten pages to us, only to reach the conclusion that we had not only not done anything illegal, but had failed to do anything that could even be considered remotely questionable.

One would hope that the Democrats and leading journalists would have some sense of regret over the public campaign that ensued against the Center. Not a chance. The only person to apologize to me was Mueller’s deputy, Aaron Zelinsky, who said that he was sorry to have subjected the Center and me personally to this kind of hardship. To be clear, Zelinsky did not express regret about his or Mueller’s conduct—they were simply doing their job. And in the case of the Center for the National Interest, they did it in a tough-minded but professional manner. I have only grudging respect for them.

There was no such closure for President Trump, for the people in his administration, or for his personal circle. Quite the contrary. They were subjected to a daily barrage of the most preposterous accusations, focusing not just on the president’s policies or his personal character, but also on his family. I myself have continually wondered throughout this process how Trump could perform as president while being subjected to the moral equivalent of daily waterboarding. It required unusual courage, perseverance, and an ability to compartmentalize for him to be able to perform his duties. There is no question that, far too often under these circumstances, Trump has been unable to separate his personal political fortunes from the larger national interest, had difficulty working constructively with his torturers in Congress, been antagonistic toward the liberal media, and been mistrustful of too many people in his own administration, including senior White House officials. But it's also the case that Trump's opponents may well have been objectively helping Russia and actually manipulated by it. Their actions bring to mind an acute observation of Nicholas II’s personal security chief, General Alexander Spiridovich, who in emigration established himself as a serious historian of revolution:

Politicians were talking about their commitment to struggle against the Germans. But in fact, they were fighting against their own government, against the monarchy. That very same monarchy, which the Germans were hoping to prevail against, and not only the Germans. Those considering themselves patriots were in fact advancing the very same revolution that was the dream of the German generals, who understood that it was their best hope to succeed against Russia and to destroy it all together. Everyone was accusing the government of being Germanophile, but they were handling themselves as effective German agents and provocateurs. The Germans only had to provide fuel to the fire.

We do not know and cannot know how President Trump would perform under minimally normal circumstances. At a minimum, however, what was done to him both by his opponents and his outright enemies provides mitigating circumstances in how we should judge his record.

SO WHAT is at stake in the 2020 presidential election? If Trump is reelected, his impressive skills in economic management are likely to help restore the economy once a combination of new vaccines and new medicine allow for the removal of strangulating controls. Economic recovery is essential for the millions of Americans without jobs, for the overall prosperity of the country, and, as a matter of fact, for America’s ability to maintain global leadership.

Less certain is what can be expected from Trump in terms of foreign policy. He demonstrated initial good instincts and fresh thinking in understanding the nature of global geopolitical evolution and the fundamental flaws of the post-Cold War consensus—which took for granted a unipolar world with the United States acting both as the world’s judge, jury and executioner as well as the pope of the new global religion: democracy promotion. Trump has still not developed even a minimally coherent concept of world politics and economics, nor has he demonstrated any ability to think strategically. By now, though, he undoubtedly has more experience, more familiarity with key countries and their leaders, and a commendable combination both of ruthlessness on behalf of American interests as he sees them and of reluctance to take huge risks in pursuit of less-than-essential objectives. If he has smoother sailing during his second term—something that, as Richard Nixon’s experience demonstrates, cannot be taken for granted—he may have a fairly successful presidency, at least one without catastrophic domestic and foreign policy disasters.