The Case for Trump is Stronger Than Ever 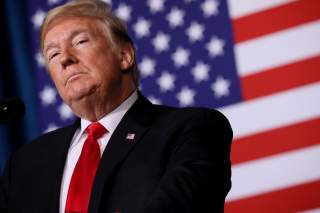 The same kind of motivated thinking that pushed Republicans to believe in “birtherism” just a few years ago now drives Democrats and liberals to think that Donald Trump has already been convicted of collusion with Russia. Trump is a goner—it’s all over but the crying, or so they think. Any news at all about Robert Mueller, Paul Manafort, Michael Flynn or Michael Cohen can only reinforce the pre-existing belief. Trump did not win legitimately in 2016 and will not last much longer. Right?

Not exactly. Trump has already outlasted all his critics’ predictions of swift doom. The latest round of court documents and revelations in the cases against Manafort, Flynn and Cohen are just the latest in a recurring series of minor developments that set the president’s enemies to pontificating confidently about what his long-form birth certificate really says—or rather, what Mueller has really found out about Russian collusion.

But look—what has really happened this past week is that Flynn, supposedly a key figure in the collusion conspiracy (after all, he talked to the Russians about sanctions during the presidential transition), has come through Mueller’s inquiry without being recommended for a jail sentence. He lied to investigators, which is a procedural crime. But Mueller apparently did not find anything more serious that would justify a prison term. Treason usually gets you at least that much.

Liberal pundits who have no way of knowing what’s going on inside Mueller’s investigation insist that Flynn’s virtual acquittal is actually really bad news for the president because it means Flynn is cooperating. Robert Mueller says so, and a federal prosecutor would never fib or hype his investigations in a politicized manner. What cooperation may mean, if anything, is anyone’s guess. But again, the president’s critics don’t need to guess: they know, with all the passion in their partisan hearts.

The recent Manafort news is a little more suggestive but hardly goes far enough to justify any excitement. Mueller wants to tear up the plea agreement he reached with Manafort because he says the former Trump campaign manager and all-around international wheeler-dealer has violated it. According to Mueller, Manafort had ongoing contacts with administration officials into this year and lied about his relations with Konstantin Kilimnik, a Russian-Ukrainian who worked for Manafort’s consulting company years ago and maintained ties to Manafort up to his time on the Trump campaign. Kilimnick is suspected of having connections to Russian intelligence and is known to be an associate of the oligarch Oleg Deripaska. Manafort had owed Deripaska money, and in 2016 he made an offer through Kilimnick to give the oligarch private briefings about the Trump campaign. Sleazy business, of the sort for which Manafort is infamous, but probably not criminal in itself. And from Manafort’s personal shadiness to campaign collusion and criminal behavior by Trump himself is a leap of faith: the evidence is so far lacking. Anti-Trump pundits do not feel a need to wait for evidence, however, not when speculation is so satisfying—and good for clicks.

The biggest news of the week concerned Michael Cohen, Trump’s former lawyer. Prosecutors with the U.S. attorney’s office for the Southern District of New York say he violated campaign-finance laws by arranging for payments to Trump’s mistresses, and he did so at Trump’s behest. Bang!—smoking gun, right? Trump is going to be impeached, or maybe just arrested, tried and convicted the ordinary way, for breaking the campaign finance laws. Just like Dinesh D’Souza, another reviled right-winger nailed by the same prosecutors’ office for campaign-finance crimes. Unlike Flynn, D’Souza got jail time—for funneling excessive contributions to a college friend’s no-hope campaign for the U.S. Senate seat held by Kirsten Gillibrand. And now Trump. Lock him up! If you can’t get him for treason, get him for jaywalking!

Liberals become remarkably credulous about prosecutors’ claims when credulity serves their political bloodlust. But suppose the prosecutors are entirely correct: Cohen made the payments, and the payments constitute a campaign contribution. This is not obvious, of course—normally, when a person thinks about a campaign contribution, it involves giving money to a campaign. Not to a woman who had sex with a public figure. But the prosecutors’ interpretation is that this is a roundabout campaign donation, a service rendered—which raises some other questions, such as whether sex itself wouldn’t be an in-kind contribution in the eyes of a sufficiently zealous prosecutor. More seriously, there is the question of whether Cohen, as Trump’s lawyer, was making specifically a campaign contribution with the payoffs or just doing the routine dirty work of a celebrity lawyer—it’s not likely that Trump waited until he was running for president to start paying women off, after all. All such doubts aside, let’s say the prosecutors have a real case. Then what?

The idea that a Republican Senate would convict and remove Donald Trump from office for violating campaign-finance law, as very loosely construed by prosecutors, is extremely farfetched. For years, the president’s critics have promised bombshell revelations of collusion and perhaps treason—the president is a Russian agent, they’ve insinuated (and more than insinuated). After all that buildup, to expect the Republican Senate or GOP voters to turn on the president because of a sex-related campaign finance peccadillo is the height of absurdity. Democrats themselves were not willing to impeach and remove Bill Clinton twenty years ago for lying about oral sex. They can hardly make a persuasive case for removing Trump over similarly trivial infractions now.

Will they try anyway? Not if they’re smart. The more politically savvy, and feasible, move would be to try to censure the president, which would score some political points with their base and possibly inflict some embarrassment on the Republicans. Impeachment would be a high hurdle to surmount even if Mueller were to find something that could tortuously be construed as collusion. Nothing less than findings that live up to the sky-high hype liberals have availed themselves of will shock Republicans and the public enough to make impeachment a serious possibility. And the odds of Mueller finding wrongdoing that indisputably compromises America’s security or integrity are long, based on everything that has transpired so far. If the case were otherwise, Flynn would be facing jail time.

That leaves the possibility of criminal charges against the president being filed by the Manhattan prosecutors who kept the children of America safe from the likes of such hardened criminals as Dinesh D’Souza and Martha Stewart. They’re demanding a “substantial” prison term for Cohen that may come out to nearly four years. The contrast with Flynn, the supposed Russian colluder at the heart of the Mueller investigation, is telling.

What happens if a U.S. attorney in Manhattan decides to charge the president of the United States with a crime like Cohen’s? Either nothing at all or a constitutional crisis. Federal prosecutors, after all, are not an executive branch unto themselves—they answer to the president, who has the power to command them and fire them as he sees fit. No one in the executive branch can pull rank on the man that the Constitution established as the head of the executive. If a prosecutor were to try to do so anyway, the case would quickly find its way to the Supreme Court. Liberals no doubt will cry foul, but partisanship aside, it’s hard to see how the judicial philosophy of the Republican majority on the Supreme Court today would lend itself to anything but an affirmation of the unitary executive. The president cannot be prosecuted by his own subordinates. This, after all, is one reason why impeachment exists in the first place. If the president is guilty of a major offense—“high crimes and misdemeanors”—it’s up to Congress to do something about it. Or else the voters at the next election.

There are a dozen stray threads in the Mueller investigation that the president’s enemies hope to weave together into his burial shroud. The president’s company was looking into opening a Moscow property well into the 2016 campaign, for example. But that’s not illegal, and again and again the best that the president’s foes can hope for is that some member of his family or among his close associates will be prosecuted for a procedural offense. The great white whale, proof of serious collusion with a foreign power, remains elusive. But nothing less than that will live up to the expectations that liberals have set—and which they think have already been fulfilled. In truth, they believed that from the moment Trump won the 2016 election. He just couldn’t really have won, and he can’t be president. He just can’t. Maybe his birth certificate is fake…