Catalonia: To Secede or Not Secede? 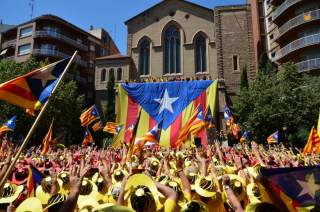 The people of Catalonia have spoken. Sort of. They certainly went to the polls on Sunday, and they did so in remarkably large numbers—77 percent of voters turned out, 9 points more than in 2012. That number demonstrates that the incumbent president, Artur Mas, succeeded in a way: he framed what could have been just another election to Catalonia’s regional parliament as a plebiscite on independence, and it was widely perceived that way.

Where he did not succeed was in convincing a majority of voters that independence for Catalonia is the best path forward, as he and his party, Convergència Democràtica de Catalunya, have argued since 2012, when they moved away from their traditional demands for more regional autonomy to outright secessionism. His electoral coalition Junts pel Sí (Together for Yes, JxSí), which also included the more leftist and historically pro-independence Esquerra Republicana de Catalunya, received just short of 40 percent of the vote this weekend. The other pro-independence party in the race, the anti-capitalist, pro-squatting Candidatura d’Unitat Popular, received just over 8 percent, for a joint total of about 48 percent. Not a majority, one would say, and nowhere near the 80 percent support for independence expressed in last year’s symbolic, constitutionally dubious, low-turnout referendum. CUP, for its part, announced before the vote that it would not support further immediate steps toward independence if the separatist parties did not receive a majority of the popular vote.

Mr. Mas, the world’s most boring revolutionary, interprets the results differently (of course). Instead of looking at the separatists’ share of the popular vote, he prefers to focus on their share of seats in the Catalan parliament. And with 72 out of 135 seats, JxSí and CUP together will indeed enjoy a majority in the parliament. If Mr. Mas and his allies can convince CUP to lend their support to the next steps in the process toward independence, they would start demanding negotiations with the Rajoy government in Madrid. If not—when those attempts lead to nothing—the Catalan government will unilaterally declare independence.

(That the province of Barcelona—the most populous of the four that make up the autonomous region of Catalonia—would in turn secede from the rest of Catalonia seems unlikely. Barcelona did reject independence more convincingly than Catalonia as a whole accepted it, and the secessionist vote was concentrated in the more rural, more heavily Catalan-speaking parts of the region. Let me be clear: No one is considering this scenario at all, but it would helpfully address one concern raised by opponents of independence: F.C. Barcelona would continue to be able to compete in La Liga.)

Having to rely on the support of unreconstructed Marxists may not be ideal as one is about to start a project of national construction, but it is the only possible way forward for the JxSí crowd at this point. They may not have a clear mandate for their roadmap to independence, but after turning this election into a one-issue affair, their mandate for anything else is absolutely nonexistent. The conservative Rajoy government in Madrid, on the other hand, has shown no appetite for a negotiated exit at all. Unlike its British conservative counterparts, the Partido Popular never even considered making a referendum on independence a possibility. A long tradition of reverence for central authority tied to the ideal of a homogenous national identity stands in the way of such considerations or even a move toward a truly federalist state. Last year’s symbolic referendum was outlawed—that is, relabeled—by the Constitutional Court, and if Artur Mas did not enjoy parliamentary immunity, he might just become the world’s most boring, imprisoned separatist.

That of course does not mean that the “Problem of Spain,” the struggle over its identity and structure, will disappear anytime soon. Spain’s two main nationwide parties—the PP and the socialist Partido Socialista Obrero Español (PSOE)—appear to have lost the ability to appeal to voters in what is a very significant chunk of the country; after all, one out of six Spaniards lives in Catalonia. The Partido Popular in particular has become all but irrelevant in Catalonia with just 9 percent of the vote, quite similar to the 11 percent of the vote it received in the most recent regional elections in the Basque Country. But even outside those two historically most recalcitrant regions, voters seems unconvinced at best that the two mainstream parties have answers to their problems, be they tied to notions of national identity or to pocketbook issues.

In May’s local elections, PP and PSOE saw their share of the vote be reduced from 80 percent to 50 percent; that tendency appears to continue for now. And while the Catalan nationalists are not a threat to the mainstream parties’ standing outside the northeast, the good-governance centrists of Ciudadanos (Citizens) may well pose one. On Sunday, they went from less than 8 percent of the vote to almost 18 percent in Catalonia. The hard left of Podemos, which performed underwhelmingly this time around in an election not centered around the economic issues that brought it to prominence, adds to that nationwide peril for the corrupt cartel that is Spain’s political class. In December all Spaniards, including, for now, the Catalans, will decide whether to use the general election to fundamentally transform the Spanish political landscape.