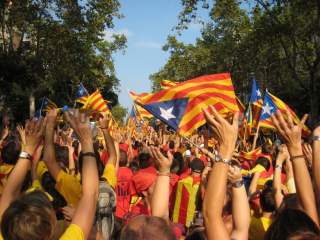 On November 9, the autonomous region of Catalonia will hold a “popular” (i.e. non-binding) referendum for independence from Spain. The year chosen has particular importance as it marks the 300th anniversary that Catalonia became officially integrated into the Spanish Kingdom, thus losing the autonomy it had enjoyed since Count Borrel ended the ties that bound the then county of Barcelona to serve the Capetian king.

Some may attribute Catalans’ call for independence to the recent European economic crisis. It is true that the region’s current leader, Artur Mas, claims that Spain has ignored Catalan requests to renegotiate the region’s fiscal agreement and that he along with other politicians such as Soledat Balaguer, journalist Pilar Rahola, and economists including Mireia Borrell-Porta and Xavier Sala-i-Martin have said that it is time for Catalonia to stop subsidizing the other less prosperous Spanish regions and to renounce a central government which does not redistribute the contributions fairly. Catalonia is Spain’s most prosperous regional economy and accounts for roughly 16 percent of Spain’s population. Most economists support Catalonia’s claims that the deficit between what the region pays to Madrid and what it receives in return for regional projects and spending amounts to around 16 billion euros annually. To be sure, historian and scholar of Catalan nationalism Enric Ucelay Da Cal agrees that the economic crisis has influenced the rise of Catalan separatism, but this is because it is seen as destroying distinctive hallmarks of Catalan culture. For example, the state of the economy has affected small businesses that have traditionally supported the Catalan economy.

The latest controversy involves Madrid’s insistence that Catalonia should foot the bill for students in the school system who wish to be educated exclusively in Spanish to the tune of 6000 euros. Spain’s lack of consideration for Catalan language and culture has also become a common gripe among the Catalans themselves (see for example the series of interviews Guardian columnist Jon Henley conducted at the time of the 2012 elections in Catalonia).

Although the financial crisis has certainly fanned the flames of separatism in Catalonia (and elsewhere in Europe), the underlying issue is the Spanish government’s lack of respect for the Catalan culture and language. A long tradition of negotiation has allowed the Catalans in Spain to successfully bargain with the state for a level of political and cultural recognition, generally without the specter of violence, at least in the recent democratic era. Indeed, it seemed that the latest reward for this pragmatism was Catalonia’s 2006 statute of autonomy, which included mention of the region as a “nation” and affirmed further control in legal, linguistic and financial matters.

In mid-2010, following nearly four years of deliberation, the Constitutional Court of Spain declared that the revised Catalan Statute had gone too far in its demands, ruling that fourteen out of the 129 articles of the Statute were unconstitutional and that another twenty-seven would need to be interpreted in the way established by the Court’s ruling. In particular, the Court deemed the mention of Catalonia as a nation to be in direct contradiction to the second article of the Spanish Constitution, thus stripping this notion of any legality. The Court also took issue with the elevated status of the Catalan language over Spanish in the media and other public domains, the proposed bilateral relation of Catalonia to Spain, the preeminence of the Catalan Supreme Court over the Spanish Supreme Court and claims for greater fiscal autonomy for Catalonia.

It is after this ruling that a discernable change in Catalan attitudes towards Madrid can be traced and that talk of independence increased. This change in attitude in the public domain was visible by over one million Catalan demonstrators, who took to the streets in Barcelona to protest the decision of the Constitutional Court of Spain on July 10, the eve of the 2010 World Cup final between Spain and Holland. The march was buoyed by the slogan: “We are a nation. We decide.”

The air of change carried on to the Diada (Catalan National Day on September 11), where current president of the leftist indepentist ERC, Joan Puigcercós referred to the national day as the “first Diada of a new era” in which the unitary factor amongst Catalans is “the volition to decide between independence or uncertain paths such as autonomy.” Even more telling was the speech given by then Catalan president José Montilla in which he acknowledged that “separatist drives” in Catalonia were calling into question the region’s relationship with Spain. Montilla was acknowledging the rise of the independentist sentiment in Catalonia, including the recent demonstration in Barcelona in which he participated.

A change in the political attitudes of the Catalans became concrete when the Catalan elections held in November 2010 brought back into power CiU, which beat out the incumbent ruling socialist party, the PSC. This result was a turning point in Catalan politics as a nationalist party had regained power. Although to be fair, CiU is considered more centrist by both Spaniards and Catalans than the left-wing nationalist separatist ERC. Independence sentiment continued to grow, and in the town of Vic became the site of the largest “LipDub” ever made, with more than 5,700 locals mouthing the nationalistic words of “The Flame” in late 2010. What could be considered a movement that sought to further distance Catalonia from Spain, was the Catalan Parliament’s ban on bullfighting, which was approved in mid-2011 and came into effect on January 1, 2012.

The Catalan Diada of 2012 was marked by the presence of a new slogan: “Catalan, new European State”. An estimated 1.5 million participants in the traditional march made it the largest to date. However, the party of President Artur Mas, which campaigned on the basis of an independence referendum in 2014, lost support in the November 2012 elections to both more militant and less radical parties and has continued on with the rhetoric of negotiations with Madrid, such as a failed attempt at negotiating for greater fiscal autonomy just prior to the November elections. Essentially, Mas was arguing for Catalonia to be on par with the Basque Country in terms of their fiscal arrangement, which involves the region’s ability to collect its own taxes. In mid-December, the Catalan Parliament set the date for the referendum which was immediately rebuffed by the Spanish Parliament, the only body possessing the constitutional power to declare a referendum. Nevertheless, on January 23, 2013, the Catalan Parliament passed the Catalan Sovereignty Declaration, asserting that Catalonia is a sovereign entity and marking “the beginning of a process by which the citizens of Catalonia will be able to choose their political future as a people.” The declaration was a clear indication of the Catalan Parliament’s intention to hold a referendum on independence from Spain. At the popular level, support for the referendum increased, with 40 percent of Catalans favoring independence. Indeed, in an act reminiscent of the demonstration by the Baltic states in 1989 for independence from the Soviet Union, a few days before the 2013 Diada, over a million participants formed a human chain, the so-called Via Catalana, which stretched the length of the Catalan territories in France and Spain.

In January 2014, the Catalan Parliament formally petitioned the Spanish government for the ability to hold the independence referendum. In April 2014, the Spanish Congress officially rejected this request. This was a further blow to the independence movement, as a month prior, the Constitutional Court of Spain had ruled that the Catalan Sovereignty declaration was invalid. Yet, according to Mas, a “Yes” vote, though not legally binding, would certainly allow him more leverage in terms of negotiating greater powers for Catalonia within Spain, particularly with regard to taxation, public spending, police, infrastructure and education. This is where Catalan pactisme (pragmatism and negotiation) has a chance to procure the Catalans what they want without seceding from Spain.

As 2014 rolls on, recent polls indicate that support for independence now sits around 45 percent. Furthermore, at the European elections in May, it was the independence-favoring left (ERC) who prevailed in Catalonia. This is significant because the ERC had not won any election since the 1930s; voter turnout was up in Catalonia as opposed to other parts of Spain; independence-oriented parties got a whopping 61 percent of the votes cast in Catalonia; and Mas’ CiU party actually lost votes. The secretary of the ERC has stated that these results should be seen as a “warning” to Mas.

A further blow to Mas was the recent admission by Jordi Pujol, Mas’ mentor and former president of Catalonia, that Pujol had evaded taxes by hiding money in overseas bank accounts. The news broke just as Mas was preparing to meet with Spanish prime minister Mariano Rajoy, with whom he shares a cold and aloof relationship. At the meeting held at the end of July, Mas was seeking, amongst other things, to convince Rajoy to give Catalonia’s referendum Spain’s legal consent as the UK did with Scotland. Rajoy remained firm, however, that the Catalan referendum will be considered illegal, leaving Mas equally resolute in insisting that the referendum still be held. Yet, behind the scenes, Mas is also preparing a “Plan B,” whereby he will call early elections and attempt to gain the support of the ERC to keep the independence momentum flowing.