Center for the National Interest Honors Secretary of Defense Ashton B. Carter 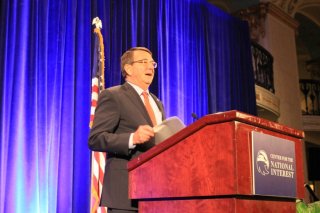 This past Tuesday leading figures from the world of diplomacy, business and government met at the Mayflower Hotel under the auspices of the Center for the National Interest to honor the service of U.S. Secretary of Defense Ashton B. Carter. The event featured appearances by National Security Adviser Susan E. Rice and Senator Pat Roberts. James Rosen, chief Washington correspondent for Fox News, was the emcee.

Rice, a longtime colleague of Carter’s, delivered an impressive tribute. She praised his analytic disposition, his effectiveness in “cutting through red tape” to get things done, and the respect that he and his wife Stephanie have “earned from the men and women who wear our country’s uniform.” Rice argued that it is “a tribute to [the Center] and our honoree” that the gathering drew “such a broad cross section of Washington—academics and ambassadors, leaders from Congress and the Administration, Republicans and Democrats.” She added that “for more than twenty years, the Center has reminded us of something we should never forget—that our national security should stand above politics.” Carter, who Rice called “a public servant’s public servant,” enjoys a similar reputation.

In his own remarks, Carter offered a sanguine appraisal of America’s power and role abroad:  “this may be controversial . . . [to] a body of realists, and maybe a little surprising coming from a Secretary of Defense, but I am incredibly optimistic about America’s position in the world today.” This is a perspective that contrasts starkly with the far gloomier and apprehensive views that are being enunciated both by Republican candidates for the presidency and by Republican legislators who have consistently argued that American power is dangerously eroded. Carter centered his own optimism on America’s strong economy (led by “dynamic and innovative businesses, world-class universities, and the domestic energy revolution now underway”), on its powerful armed forces (“No other military possesses this kind of skill and agility backed by experience”), and on the intersection of the two in a defense industry shaped by competition and market pressures, not centralized directives.

Carter added that America’s “antagonists and competitors push many states” to align more closely with it, “giving us so many friends and partners and leaving countries like China and Russia, not to mention North Korea, to stand largely alone.” China and Russia of course claim that they increasingly stand together rathern than belong alone. Carter noted current U.S. initiatives against the Islamic State group and “those who would turn back the clock” in Europe, but also emphasized the need for a strategic approach that “keep[s] all the world in synoptic view,” appropriately mixes foreign-policy tools, and “use[s] history’s lessons to pursue today’s opportunities.” He called for a vision of “preventive defense” that “avert[s] dangerous developments before they require drastic remedies,” saying that prevention is not always sufficient but can “help us pursue balance [...] between today’s security and the future’s threats.”

The event served as an important and stimulating forum to address the principal foreign policy challenges confronting the United States at a remarkably turbulent moment abroad, whether the issue if Russia, the Middle East, or Asia. Center president Dimitri K. Simes noted in his opening remarks that the appearances of Rice and Carter further testified to the center’s bipartisan but tough-minded approach to foreign policy. He also called for heeding the institution’s founder Richard M. Nixon who cautioned us to see international developments and events as they are rather than as we wish to see them.