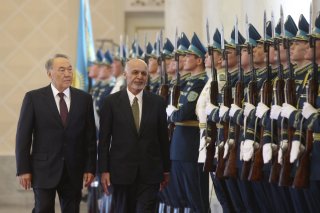 Secretary of State Antony Blinken is wrong when he says that the United States is exiting Afghanistan because it needs to commit resources on countering China. The two goals are not necessarily mutually exclusive of one another. On the contrary, Washington can do both by strategically engaging with Central Asia. Reliable regional partners such as Kazakhstan and Uzbekistan, who are eager to enhance their relationship with the United States, have an imperative to ensure that a post-American Afghanistan does not threaten international security and prevent China from dominating their region.

An increasing number of security personnel are surrendering their posts to Taliban fighters across Afghanistan, the New York Times reported May 27. Earlier on May 8, eighty-five people were killed in a car bomb attack that targeted a high school for girls in a predominantly Shia Hazara district in the Afghan capital. Such incidents are heightening fears that the Afghan state could be overwhelmed by the Taliban as U.S. forces complete their expected withdrawal by Sept 11, 2021. These are precisely the kind of conditions that could create strategic vacuums in the country that will serve as springboards for transnational jihadist activity and, therefore, the United States needs to have forward operating bases in neighboring countries.

Pakistan is the obvious first choice, however, those facilities will not be enough, especially given that Islamabad is under a lot of domestic pressure to not extend basing rights to Washington. The only other options are in the Central Asian states. This would explain why in early May, U.S. Special Representative for Afghanistan Reconciliation Zalmay Khalilzad visited Uzbekistan and Tajikistan. What’s noteworthy is that this trip by Khalilzad—who has been in direct negotiations with the Afghan jihadist movement—was to two of the three Central Asian nations that border Afghanistan. On May 4 Blinken also held a virtual meeting with the foreign ministers of the C-5+1 group, which includes all five Central Asian states—some two weeks after he held phone meetings with his Uzbek and Kazakh counterparts

Around the same time, Russian defense minister Sergei Shoigu traveled to Tajikistan and Uzbekistan. Shoigu reportedly signed agreements on military cooperation to meet any security threats that will emerge out of Afghanistan once the United States completes its withdrawal from the country. The Russian army’s 201st division has been deployed along the Tajik-Afghan border since the 1990s. Moscow and Dushanbe have an agreement to keep the Russian troops in the country until 2042.

Great powers and their Central Asian partners will have to deal with insecurity spilling northwards from Afghanistan—militarily and otherwise. A future U.S. military posture is also unclear, but there is talk of Washington being interested in bases in Central Asia as an alternative to boots on the ground in Afghanistan. Significantly, China has long established a military outpost in eastern Tajikistan that allows it to monitor Afghanistan’s northeastern Wakhan Corridor, which has a narrow border with China’s restive Xinjiang province. These various military moves notwithstanding, the logic of the international engagement with the Taliban shows that a post-American Afghanistan will be managed more diplomatically than militarily.

To varying degrees, many regional actors have long been involved on the diplomacy front. These include Pakistan, Iran, Qatar, Saudi Arabia, the United Arab Emirates, Turkey, India, China, Russia, and the European powers. Many of these are key U.S. partners but even the most robust of them are limited in what they can do to help Washington. Either they have limited influence in the country, or they have their own interests that diverge from those of the United States.

Others are outright U.S. adversaries such as Iran, Russia, and China whose interests are acutely at odds with Washington’s. And these three also happen to be those that border Central Asia. Clearly, there is a need for a neutral platform from where Washington has a better chance of achieving its diplomatic objectives regarding to Afghanistan. That may be Kazakhstan, given its considerable track record in multilateral diplomacy and international cooperation efforts.

After Kazakhstan gained independence during the 1991 implosion of the Soviet Union, its founding first president, Nursultan Nazarbayev, in 1992 proposed the creation of the inter-governmental forum called the Conference on Interaction and Confidence-Building Measures in Asia (CICA). Formally established in 1999 by sixteen member nations to foster security and stability in Asia, CICA’s membership today stands at twenty-seven full member states and eight observers. Israel and Iran are members and work side by side in the forum and its committees. Nazarbayev also played a key role in his country’s nuclear disarmament, which was a major driver of the efforts to denuclearize the various nations that were once part of the former Soviet Union, making Central Asia a nuclear-free region.

More recently, Kazakhstan also acted as a key facilitator of the early negotiations in 2013 that led to the 2015 Iran nuclear deal known as the Joint Comprehensive Plan of Action. Separately, the Kazakhstani capital Astana (renamed as Nur-Sultan) has been a major venue for several rounds of Syrian peace talks involving Russia, Turkey, Iran, the Syrian regime, and opposition groups from 2015 to 2019. Geopolitically sandwiched between Russia and China, Kazakhstan under Nazarbayev and his successor Kassym-Zhomart Tokayev demonstrated an uncanny ability to balance between Moscow and Beijing. At the same time, it has been able to forge close ties with the United States, which it seeks to enhance.

While not having a direct border with Afghanistan, Kazakhstan is the region’s natural leader—given that it is Central Asia’s largest economy. It is thus well-positioned to lead the regional effort to deal with problems that will radiate out of Afghanistan in the years to come. Obviously, Washington will have to continue dealing with Pakistan and other main interlocutors. But now that the United States will no longer be militarily involved in Afghanistan it has an opportunity to deal with the country’s problems through greater engagement with Central Asia.

Coming up with a long-term mechanism on how to deal with Afghanistan post-withdrawal should be the starting point for strategically enhancing ties with the region that sits at the heart of the Eurasian landmass. China is a much greater incentive for the United States to invest in Central Asia. After all, the Chinese do not represent a maritime challenge, which is why they are investing big time on their Belt & Road Initiative in Central Asia. Thus, by dedicating resources in the region Washington can continue to manage Afghanistan while it seeks to deal with an assertive China.

Dr. Kamran Bokhari is the Director of Analytical Development at the Newlines Institute for Strategy & Policy. Dr. Bokhari is also a national security and foreign policy specialist at the University of Ottawa’s Professional Development Institute. Bokhari has served as the Coordinator for Central Asia Studies at the State Department’s Foreign Service Institute (FSI). Follow him on Twitter at @KamranBokhari.