Central Asia Is Crucial—But Nobody Seems to Care 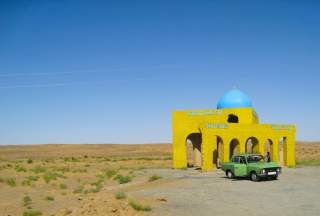 The death of Islam Karimov sparked discussions, not only on the future of Uzbekistan, but also on the geopolitical meaning of Central Asia. One thing is clear: despite the region’s importance, the major outside powers encounter significant difficulties when attempting to improve their standing there. The West, Russia, China, India, Turkey, the Gulf states and Iran all have reasons to engage with Central Asian republics, and all need to expend a great deal of effort to secure sustainable results for their policies. In this game, Russia might be proving itself to be the strongest player.

The Great Game of the nineteenth century—the competition between the Russian and British empires for dominance in Central Asia—had two main characteristics. First, Russia was a challenger to Great Britain already dominating India and South Asia. The British Empire pushed back against Russia’s efforts to extend its influence to the south from Central Asia, challenging British positions. Second, with the importance of India and the British fear of losing “the brightest jewel in the British crown,” this contest was to a significant degree secondary to European politics, defining the international relations of that age.

Today, while analyzing the modern Great Game in Central Asia, there is no clear dominating power or challenger—or, for that matter, multiple challengers. Several current players in the region have different advantages and shortcomings. Although it is hard to determine the central zone of today’s world politics, with the continued significance of Europe, and the prominence of the Middle East and the Pacific Rim in terms of global security, Central Asia’s importance is hard to underestimate.

In the short run, the Muslim masses of the Central Asian region, which can hardly be considered affluent, present one of the most promising sources of recruits for Islamic extremism. Gulmurod Khalimov, a former Tajik special-operations colonel who became one of ISIS’s senior military leaders, is only the most well known among the thousands of Central Asia–born terrorists. However, the bigger challenge for countries along the borders of Central Asia, whether Russia or China, and for global security in general, lies in the possibility of a wide-scale Islamist insurrection that could transfer the region into to a hotbed of global extremism.

Central Asia’s energy resources are important in the long run. But one can argue that since the demise of Soviet Union they have been overestimated. Moreover, against the background of falling oil prices, these resources are less sought after. But considering the growing global demand for energy, and oil and gas constituting the biggest share for at least the next twenty-five years, countries strategically managing their energy security and energy companies fighting for market dominance in the coming decades cannot help but retain a presence in Central Asia. Even with lowered estimates, the region remains rich in hydrocarbons.

Every major power active in Central Asia is involved for its own particular reasons. But all of them know the extent of the difficulties that need to be overcome to establish a sustainable presence in the region. Despite their geographical proximity and a long history of relations with the region, Iran, Turkey and, to a lesser degree, Saudi Arabia currently have too much on their plates to divert their attention to increasing their influence in Central Asia. The wars in Syria and Yemen, and the struggle for influence in Lebanon, Iraq and other places in the Middle East, coupled with the challenges of domestic development, have pushed Central Asia to the back of Iran’s foreign-policy priorities. Iran’s counterpart in many of these struggles—Saudi Arabia, arguably the most influential Arab power in the Gulf—is also too occupied to become actively involved in the region. Furthermore, the growth of Saudi activities in Central Asia and elsewhere in recent decades has been connected to the involvement of groups considered by many to be extremist. Bearing in mind the current international situation, one could argue that it is not the best time for Riyadh to support these activities.

Ankara is also too busy to raise its profile in Central Asia. The peculiarity of Turkish situation is determined by the fact that the advancement of Turkish “soft power” in Central Asia was connected to Fethullah Gülen’s organization. Today, Gülen’s networks are persecuted by the Turkish state, both domestically and internationally. For India, despite all its interest in foreign energy sources, Central Asia seems still beyond its diplomatic means. Competition with Pakistan for influence in Afghanistan takes up too much of India’s foreign political resources to plan any for further advancements to the north.

After twenty-five years of discussions about Central Asia’s importance, the West has nothing to show in terms of development of cooperation with the region. The United States secured enough support for its Afghan campaign, which was not a difficult task considering Central Asian rulers’ fears of Islamic extremism, but still has to prove it that has both crucial strategic interests in the region and an effective policy to protect them. The EU, with its endless rhetoric about the need to substitute Russian energy resources with those from Central Asia, has not advanced in accomplishing this task. After decades of countless speeches, lengthy policy papers, and deep academic articles and well-written op-eds, there are no significant energy supplies from the region reaching the EU, with the exception of oil from Kazakhstan. However, Russia participates in the production and transfer of that oil to a significant degree, and most importantly, the amount delivered is still five to six times smaller than that coming from Russia.

There are different explanations for this situation, but several of them are worth emphasizing. On the one hand, despite all the talk, energy supplies from Russia are still much more attractive economically than those from many other countries, including Central Asia. If energy supplies from Russia were a real security and economic threat to Europe, the threat would have been addressed a long time ago. On the other hand, any idea of Western cooperation with Central Asian states comes to an immediate halt when Western representatives start lecturing Central Asian potentates on democracy and human rights.

Compared to the West, China seems to be in a far better position: it drastically needs Central Asian energy resources, and knows better than to discuss democracy. However, Chinese involvement in Central Asia, as in many other regions, is limited. Certainly, energy resources are welcomed, but aside from that Beijing is in no rush to offer anything. It takes a stretch of the imagination to see Chinese troops on the Tajik-Afghan border, or to contemplate how China can drastically help the economic development of these post-Soviet nations given the multitude of social and economic problems in Chinese regions bordering Central Asia and beyond.

After analyzing the positions of other players in the new Great Game, we can argue that the skeptics proclaiming Russian policy towards Central Asia to be doomed are wrong. Still, Russia’s success is not guaranteed. The Central Asian republics might not have been the ones looking forward to a Soviet Union collapse, but their leaders had no problem becoming absolute rulers of their newly independent domains, able to counterbalance Russia’s effort to return to dominant positions. (Especially when Russia was not seriously trying to regain its dominance during the first post-Soviet decade.) One of the factors in this success was the fact that Central Asian, Russian and, for that matter, almost all post-Soviet leaders shared a common background. Their political careers were determined by the common experience of rising through the ranks of Soviet bureaucracy. They had common language, attitudes and mentality. Their modus operandi for dealing with Gorbachev—and, later, Yeltsin—could be depicted as cooperation, but nevertheless involved severing ties with Russia.

Ukrainian president Leonid Kuchma, a former member of the Central Committee of the Communist Party of Ukraine, was the master of that policy: while pretending to be a representative of eastern Ukraine, and a politician friendly to Moscow, he significantly diminished Russia’s influence in Ukraine. Islam Karimov also knew how not to be openly hostile to Moscow and still gain space for maneuvering in a direction that was not necessarily pro-Russian. The epoch is changing for Russia’s relations with Central Asia in general, and Uzbekistan in particular. There are no guarantees that new leaders will be or pretend to be pro-Russian, and the chances are high they will not. But it will cost them significant effort to retain power in turbulent times. And in this situation, Russia might again become their partner of choice.

Moscow has a great deal to offer: security and energy cooperation, its labor market and education for the Central Asian population, trade, and investments—and all this not from charitable generosity, but because of the economic and security interests Russia has in the region. The forms that this cooperation takes are varied, from bilateral projects to the full-scale economic integration of the Eurasian Economic Union. As time goes by, this cooperation is determined less by the nostalgia for the common country of the past, and more by clearly understood interests and a realpolitik approach.