Challenge China in the South China Sea by Democratic Example 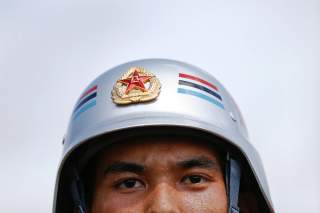 Australia and Timor-Leste will be finalizing their Timor Sea maritime-border agreement this month through the first time use of a compulsory conciliation clause that is part of the United Nations Convention on the Law of the Seas (UNCLOS). Moreover, the reconciliation effort of Indonesia and Timor-Leste has led to, among other things, successful negotiations of their land border. Together these two accomplishments could help propel a broader regional narrative that promotes and institutionalizes support for democratic ideals, reconciliation-based solutions and international norms—challenging China’s one-sided border demands in the South China Sea. But for this to happen the United States must champion such regional developments.

Timor-Leste, a former Portuguese colony, voted in a plebiscite for independence from Indonesia in August 1999 (78.5 percent in favor to 21.5 percent against) after twenty-four years of occupation and resistance, which killed nearly a third of the population and affected every family. The opposition to occupation and international pressure on Indonesia eventually led to a trilateral agreement signed between the United Nations, Portugal and Indonesia in May 1999, which enabled the Timorese people to determine their destiny through a UN-sponsored ballot. The victory quickly turned to devastation as departing Indonesian-backed militias burned much of the country’s limited infrastructure to the ground.

The subsequent story of reconciliation between Timor-Leste and Indonesia is remarkable for the process and its success. After gaining independence in 2002, the leadership of Timor-Leste prioritized reconciliation with truth-telling to forge a new relationship with its closest neighbor, and to heal its divided community. The process was supported by an Indonesian government democratizing its politics and reforming its security institutions. Instead of following the standard international human-rights agenda to prosecute individual perpetrators of violence, the leaders of Timor-Leste and Indonesia instead sought a model of reconciliation anchored in both local peace-building and state-building.

The path of reconciliation stabilized the relationship between Timor-Leste, a majority Catholic country, and its majority Muslim Indonesian neighbor because the leaders of the two newly democratic nations (Xanana Gusmao, a former guerrilla leader, and Susilo Bambang Yudhoyono, a former officer who served in Timor-Leste fighting the resistance) pursued reconciliation through the establishment of the Indonesia-Timor Commission on Truth and Friendship, which uncovered the facts behind the violence by prompting perpetrators to confess their wrongdoings in public hearings while at the same time stripping away their impunity. The confessions created the opportunity for the people of Timor-Leste to forgive, enabling both countries to restore their relationship.

Timor-Leste’s and Indonesia’s newly democratic experience provided a common language and shared ground in their effort to reconcile and put the painful past behind them. Reconciliation helped Indonesia democratize its politics and helped Timor-Leste build its democratic institutions. It paved the way for the land-border negotiations that is nearly complete and contributing to peace and stability in the region.

During the occupation of Timor-Leste, Australia negotiated a Timor Sea border agreement with Indonesia that favored Australia’s interests and enabled it to exploit significant gas resources. The arrangement did not comply with internationally recognized maritime-border norms. When Timor-Leste became independent, the border limited access to resources that could play a significant role in its development and reconstruction.

Although Australia renegotiated a more favorable revenue-sharing arrangement in the Timor Sea, it wanted to keep as much of the old border and resource advantage as possible. Australia even withdrew from the binding arbitration provisions of UNCLOS in 2002, just two months before Timor-Leste’s independence to ensure they retained their gain.

As Australia resisted further talks on the border, Timor-Leste invoked a mandatory conciliation provision within UNCLOS in April 2016. The invocation of this clause helped finally move Australia toward discussing and accepting a more equitable border arrangement with Timor-Leste. However, it was the many Australians who spoke out against the old border arrangement that had the most significant effect. Popular opinion in Australia gradually shifted against the Australian government’s previous actions. One reason was the memory of the sacrifice of the people of Timor-Leste, which is where more than forty thousand perished, helping the Australians fight the Japanese during World War II.

What these two situations show is that although it has not been easy, Southeast Asia and the South Pacific region’s growing democratic character is making the resolution of border disputes and improved regional relationships possible, offering hope for the future.

The South China Sea dispute lacks a shared democratic thread, and China’s interpretation of its maritime boundary rejects international norms. Nonetheless, the examples of Australia, Indonesia and Timor-Leste matter because it challenges China’s fundamental argument that such disputes should be solved by the weaker party agreeing to the stronger party’s demand, rejecting the idea of just reconciliation, international arbitration or conciliation.

The bilateral negotiations forged by Timor-Leste and Indonesia worked not because Indonesia imposed a border through diktat, but because of a shared commitment to a just future. The Timor-Leste and Australian border talks highlight that stability and trust emerge not from unreasonable demands but a commitment to shared democratic principles, good-faith negotiations and a willingness to abide by internationally accepted norms, not unilateral actions.

Moreover, Timor-Leste’s initiation of UNCLOS conciliation exposes China's rejection of arbitration or mediation in the South China Sea as self-serving, without merit and destabilizing. Australia and Timor-Leste are direct proof that such conciliation works, building trust and goodwill between nations and enhancing regional stability.

The United States should capitalize on the opportunity to highlight, encourage and codify this local South Pacific and Southeast Asian experience by emphasizing the fundamental principles it represents. It should do so by supporting a Southeast Asian and South Pacific charter, which would enunciate the importance of democratic institutions, reconciliation and adherence to international mechanisms for arbitration and conciliation. Such an approach would crystallize a vision for Southeast Asia and the South Pacific grounded in shared democratic values, a commitment to regional economic development, and the acceptance of international norms.

There has been much talk in the United States over the years about a pivot to Asia; the United States must broaden that pivot by supporting and institutionalizing local democratic processes to help bring cooperation, peace and stability. It should encourage Australia and Indonesia and other democracies in the region to join together in this effort.

Francisco da Costa Guterres served as the secretary of state for security of Timor-Leste and oversaw police, immigration and conflict prevention from 2007–15. From 1999 to 2003, he was a member of the Reconciliation Team, which dealt with resistance and pro-autonomy groups. He is a board member and trustee of the Dili Institute of Technology. He has a PhD in Politics from Griffith University, Brisbane.

Kjell-Åke Nordquist is a professor in international relations with a focus on peace-building and human-rights. He teaches at the Stockholm School of Theology in Sweden. Nordquist has been working in the fields of autonomy and conflict resolution as a researcher and a practitioner. He is a member of the board of the Research Council of the Åland Islands Peace Institute and has been working with peace processes in Colombia, the Middle East and Timor-Leste.

Charles Santos served in different diplomatic and political capacities with the United Nations from 1987–96, including as political advisor of the Special Envoy to Afghanistan and deputy head and political advisor of the United Nations peace missions to Afghanistan and Tajikistan. He has been a senior executive and board of various gas and gas pipeline projects in Central Asia and Southeast Asia from 1997–2017 and has spent significant time in Timor-Leste since 2007. He was a Council on Foreign Relations term member in the late 1990s and an International Affairs Fellow at CFR in 1996–97. He has testified before Congress on political and energy issues.