Changing of the Guard in Australia? 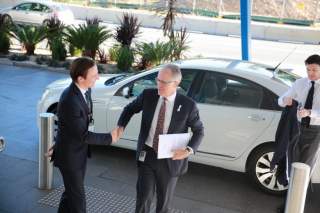 Since Barack Obama was elected president in 2008, he’s had to make three calls to Australia’s “Bush capital,” Canberra, to congratulate a new prime minister on winning the highest political office in the land. He may be about to make his fourth.

On Sunday evening Washington time (Monday morning in Australia), the parliamentary members of the incumbent Liberal Party will decide whether they want to “spill” (declare vacant) the position of party leader and thus prime minister. If that vote is passed, the sitting prime minister, Tony Abbott, will almost certainly be challenged for the leadership by the Communications Minister, Malcolm Turnbull.

How did it come to this? Abbott’s poll numbers have been at disastrous levels for months now, primarily due to the shock his government gave the public over austerity measures announced without warning in last year’s annual budget. There have been a number of policy blunders since and two shock state election losses for Abbott’s party. Then, in late January, came Abbott’s decision to offer a knighthood to Queen Elizabeth II’s consort, Prince Philip. The announcement was met with almost instant derision and disbelief across the political divide. Yes, Australia is a constitutional monarchy and the Queen is Australia’s head of state. But, although support for that constitutional arrangement is strong, this does not translate into a particularly deep public affection for the royal family. Abbott is an exception, and his tone-deaf decision to honor Prince Philip was seen by the country as a national embarrassment and by his colleagues as a colossal failure of political judgment.

With Abbott a laughing stock and the Liberal Party set for defeat after just one term, members of the government began agitating for a change of leadership in order to arrest the slide in the polls and give themselves a chance to retain their seats at the next election. On Monday they will have their chance, though even if Abbott survives the spill motion, he will emerge as a diminished leader of a divided party, and could still fall in the months ahead to his long-time rival Turnbull.

So who is the alternative prime minister of Australia and what does he stand for?

Malcolm Turnbull is a man of fierce intellect, great personal drive and ambition, and tremendous self-belief. Having worked as a journalist, lawyer and businessman for decades before entering politics, he’s also a more rounded personality than is common in Australian politics nowadays, where political careers tend to start in university. Turnbull has been a public figure for decades. He represented former MI5 agent Peter Wright in the infamous “Spycatcher” trial, defeating the Thatcher Government’s attempts to suppress Wright’s memoir. And in 1999 he led the campaign for Australia to overturn its constitutional attachment to Britain and become a republic (Tony Abbott was a prominent voice for keeping the constitution intact, and his side won the referendum).

Turnbull represents the more centrist wing of the center-right Liberal Party, while Abbott is on the right. It’s an ideological difference that reveals itself through the issue of climate change, where Turnbull has previously taken a much more passionate stance in favor of Australian and international action. Indeed, when Turnbull was leader of his party once before (2008-09), he staked his leadership on the passage through parliament of a carbon pricing scheme. The Liberal Party was in opposition at the time, and Turnbull tried to persuade his colleagues to back the government’s bill, a move which almost split his party and eventually led to Turnbull’s removal as leader. He was replaced by, you guessed it, Tony Abbott, who as Prime Minister repealed Australia’s carbon tax in 2014.

The climate issue thus became central to Turnbull’s political identity. He lost the leadership of his party on a point of principle, earning him a reputation for integrity. When he was asked in 2009 to change his stance on the issue or risk losing his job, he said “How can I change the principles I have championed? What reputation would I have left?”

The trouble is, the divisions which led to Turnbull’s ouster in 2009 have not been resolved, and the right of the Liberal Party (as well as its coalition partner, the rural-based Nationals) maintains its antagonism to carbon pricing and is suspicious of what it considers an exaggerated or even wholly fictional environmental threat. Since 2009, Turnbull has softened his stance on carbon pricing and said just last week that the carbon tax repeal could not be overturned unless there was a global agreement. It’s not clear whether the public is aware of such nuances – Turnbull will need to mollify the right of his party to return as leader, but at the risk of harming his reputation as a principled, centrist environmentalist.

Turnbull may get lucky, though. The international momentum to take concerted action on climate change is stronger than it has been in years, particularly in the wake of last November’s China-US agreement on curbing emissions. In the still unlikely event of a substantive global emissions reduction agreement in Paris later this year, Turnbull could have the opening he needs to return Australia to some form of carbon pricing.

Turnbull can also be expected to take a different tack on Australia’s most important economic partner, China, though here the changes will be more subtle. Tony Abbott subscribes to the view that there is no tension between Australia’s strategic relationship with the U.S. and its economic partnership with China: “Australia does not have to choose” is the mantra.

This is true for the foreseeable future but it implies a certain complacency about China’s rise, an unwillingness to confront the strong possibility that Beijing is unhappy with America’s uncontested military primacy over the Asia-Pacific maritime theatre. China is already showing signs of wanting to contest that primacy, and the U.S. is pushing back mainly by beefing up its alliances in the region (including with Australia). If this rivalry escalates, it’s not inconceivable that one day, perhaps much sooner than we think, Australia will have to take sides in a clash between Beijing and Washington.

Turnbull is alive to such risks, and he seems to favor a conciliatory path to resolving U.S.-China tensions. He reviewed quite favorably a book by a leading Australian academic arguing that the U.S. should give up its primacy and instead find an accommodation with China in which the two countries share power in the Asia-Pacific (Turnbull also notes in passing that Beijing’s South China Sea territorial claims are not “without any legal merit”). There is a strong streak of realism in Turnbull, who has quoted the Thucydides line that “justice is only to be found as between equals in power. As for the rest, the strong do as they will and the weak suffer as they must.”

This unsentimental attitude to great powers won’t just guide Turnbull’s interactions with Beijing, but with Washington as well. It is hard to imagine Turnbull uttering Abbott’s line that “few Australians would regard America as a foreign country.” Instead, Turnbull offers the judgment that “there is a lot of merit in Australia being seen to have a mind of its own, while remaining a staunch ally of America.”

On a personal level, too, President Obama may find Turnbull a sticky proposition. Turnbull and Obama are both men of formidable egos – just like Obama, Turnbull is often described as considering himself “the smartest guy in the room.” Moreover, Turnbull’s political colleagues have in the past found him to be a little too free with his advice, though it is said he has mellowed. Should Obama need to make that congratulatory phone call to Turnbull, it will no doubt be a cordial affair.  Whether the relationship maintains that course is an open question.