Chaos and Order on Islamic Militancy's Other Front 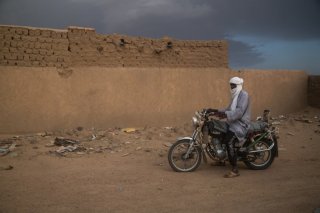 Last Friday, Islamic militants seized over 170 hostages in the Radisson Blu luxury hotel in Bamako, the capital of Mali. The militants managed to kill at least nineteen hostages before being overpowered. Coming on the heels of the ISIS bloodbath in Paris, the collective reflex has been to connect the attacks. But the episode should be recognized for what it was: an assault on efforts to stabilize the West African country. This week, President Obama hosted French President Hollande in Washington. While the focus of the meeting was undoubtedly on ISIS, its stronghold in Syria and the threat to western nations, Mali, too, must have loomed on the agenda for the problems it poses.

The first order of business must be to double down on a shared commitment to Mali’s peace process. There is good reason to think that the jihadists who attacked the hotel were intent upon scuttling that process. In June, an agreement was finally reached between the government and key rebel Tuareg factions. The accord cemented an important wedge between those factions and the Islamic militants they partnered with a few years before. The hotel was hosting delegations for the next round of discussions when it was targeted. UN officials are deeply concerned that the attack was designed to disrupt the talks. A collapse of the accord would undermine stability in Mali’s restive north and create space for the jihadists to thrive.

Second, counter terrorism efforts against the jihadists will need to be intensified. Two local Al Qaeda affiliates appear to have collaborated in the affair. In 2012, these groups made common cause with Tuareg insurgents to seize two thirds of Mali and then went about imposing Sharia law at gunpoint. France intervened the following year, deploying 4,000 troops to scatter these factions. A UN peacekeeping force was then sent to stabilize the north. The fact that Al Qaeda elements were able to carry out a spectacular assault in the capital city a few years later serves as a poignant reminder of their resilience. Only pressure will keep them at bay and allow the politics of reconciliation to play out.

Third, President Hollande must resist the temptation to draw down the French presence in Mali as part of a pivot to confront ISIS. He has rightly described the attacks in Paris as an “act of war” and has promised a “merciless” response. France still maintains 1,000 troops in Mali, to backstop a much larger UN stabilization force and to carry out the very sort of counterterrorism operations that will now be required. No doubt Hollande wishes to muster all his country’s resources as the French gird for the ISIS fight. But these efforts should not come at the expense of France’s commitment to Mali.

Fourth, UN member states must give the world body’s most dangerous peacekeeping mission the resources to do its job. The UN force took over from the French and Africans in 2013 to help stabilize the north of the country. Their presence is an essential element of the overall effort to craft a lasting peace. But the blue helmets have suffered at least forty hostile fatalities since taking the field. The same groups that attacked the Radisson Blu target the peacekeepers on a regular basis. The UN has repeatedly asked its member states for the resources to protect itself in Mali. Those resources must now be forthcoming.

The Bamako attack should serve as a wake-up call for all who have a stake in Mali’s long-term stability. Two years before ISIS declared its caliphate, jihadists enjoyed free rein over a chunk of West Africa the size of Texas. It took thousands of French troops to push them out and double that number of peacekeepers to restore some semblance of order. That investment is under threat. Now is the time for an ounce of prevention, as another pound of cure may not be possible once the fight against ISIS gathers steam.

Hardin Lang is a Senior Fellow at the Center for American Progress.